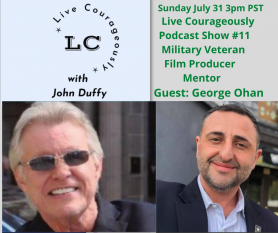 HOLLYWOOD, Calif. – July 30, 2022 – PRLog — “Live Courageously” Podcast Show is a show for our time where fear and courage are battling it out in our lives.

The Podcast show brings on a wide range of guests who have lived courageous lives in the face of many types of adversity.

Most of the initial guests are friends of the moderator John Duffy and the purpose of the show is to share the stories of these powerful friends of his with the audience to encourage the audience to reject the messages of fear and embrace courage, especially in our troubled times.

The Podcast show will be Live every Sunday @ 3 pm PST

It will air Live on John Duffy’s Facebook Page and Youtube Channel and will be available to watch as a recording.

Links to watch Live or on recording:

George is a US Army Veteran, Founder of Fulton Film Company , the Financial Literacy Film Festival and digital content Producer.

George is an accomplished Business Professional with a background in Entertainment Business Marketing, Public Relations, and International Communications. Serving clients from California to Puerto Rico.

George has earned college degrees in Film Production and Entertainment Business at The Los Angeles Film School in Hollywood, Ca. He is familiar with both the theory and application of film production and digital cinema techniques.  In the past, George was named as one of Los Angeles’ top emerging filmmakers by FilmL.A., Inc., which is a nonprofit, public benefit corporation that acts as the crucial link between the city of Los Angeles and serves production companies in the communities in which they film.

At The Los Angeles Film School, George served as the Military Transition & Community Outreach Officer.  His uncanny ability to bridge the gap between civilians and military veterans has been a part of his life’s work to help change people’s lives.   When George was a recruiter he changed lives by helping civilians become soldiers, and now he has the very important task of helping veterans and their families transition into civilian life to tell their stories.

A little about the creator and moderator of “Live Courageously”.

John Duffy has worked extensively in the entertainment industry for years, producing over 40 + films in his film career. John has overcome trials and tribulations of life and has accumulated quite the tale, which has encouraged him to help others and motivate them in their dreams.

John grew up in the South Bronx and fully expected his life to fall under one pathway. But after dropping out of high school at 15, John knew he wanted more and was destined for more in life. After many journeys, John has made his way as a producer, professor, and motivational speaker in the entertainment world. John has recently produced the feature film, Left Behind, with Kevin Sorbo. In addition to his work in the industry, John is an adjunct professor at Art Center in Pasadena. John has also worked in the personal development industry. With Tony Robbins as his mentor, John wanted to help others as Robbins has done.

He has been producing a weekly live show on Facebook for two years covering inspirational transformational material. On February 20th, 2022, John introduced his new podcast, “Live Courageously”, which covers the idea of how to live courageously and honestly. He has produced 10 shows this year.

John has also written two memoirs, Black Irish – Not Your Average White Boy and Mao to Reagan- A Born Again American. Both are currently being shopped to publishers. The two works cover John’s early life and his journey throughout life and how he got to where he is when he discovered where he came from.

This book is all about delivering great tasting and simple recipes so you can enjoy five-star gourmet restaurant meals right in your own home. But it gets even better…the recipe ideas are quick-n-easy ways for you to enjoy a wide variety of Traverse Bay Farms award-winning gourmet food products with every meal of the day.

Check out just of few of the simple-and-easy recipes you can make right in your own kitchen:

According the Andy LaPointe, Director of Marketing with Traverse Bay Farms, “This book isn’t about providing recipes with measured ingredients, but about adding our gourmet products to everyday recipes to enjoy an additional depth of flavor. Best of all, these recipe ideas won’t add any extra work or preparation time to the meals.”

Within these pages are hidden gems of flavor. You will enjoy how the flavors bounce around your palette. Our gourmet food products will be complimenting the other ingredients and flavors without overwhelming them.

When creating this recipe book, our focus was on finding the right pairing for our products and the other food ingredients in the recipes to accentuate all the flavors. Thus, the entire dish provides an equal balance of flavor and tastes great!

We hope you enjoy all of the recipes in this one-of-a-kind book.

The SuperWomen in Flash Leadership Award recognizes women who have shown outstanding leadership in the growth, development, and use of flash and related technologies and systems.  Dr. Li’s years of work and leadership are illustrated by over 200 patents and includes the development of the first triple-layer cell (TLC) in 2008.  Today she leads Western Digital’s efforts in the next generation BiCS NAND.

“To me, NAND Flash is the most amazing technology in the world, and I am so proud to be recognized for helping to advance both Flash and opportunities for women in this industry that I love so much,” said Dr. Yan Li, Vice President, Memory Technology, Western Digital. “I’m thankful to the mentors who have invested in me over my career, and I am committed to helping develop the next generation of Flash engineers. As we look ahead to the next 35 years of Flash, the possibilities for innovation are endless for those who foster diversity and challenge conventional thinking.”

Chuck Sobey, Chairperson for the Flash Memory Summit said, “This award is critically important to the entire staff of FMS.  We know recognition and highlighting the experiences and success of women will build more leadership in our industry.”

Dr. Yan Li will be recognized at the main session of FMS at 11:00 am on Wednesday, August 3rd, 2022.  This will be followed by the SuperWomen in Flash Peer Exchange event from 4 – 6:15 PM held at the Santa Clara Hyatt Regency and

SuperWomen in Flash celebrates the success of women in the flash memory industry and encourages more young women to join this dynamic market.  The steadily growing organization is supported by a broad group of women and vendors.

“We are thrilled to honor Dr. Yan Li, this year’s recipient.  And thankful for the support of the community and the venue to gather.  Our digital economy is driven by the data technologies these women (and men) develop and devise ways to protect.  We need more of these great thinkers to address the issues of growth, scale and security of our data.” said Camberley Bates, Managing Director of Evaluator Group and founding chair of SuperWomen.

Past recipients of the FMS SuperWomen Leadership Award

Link to Register for the SuperWomen in Flash Event: https://www.evaluatorgroup.com/superwomen-in-flash-2022/

Evaluator Group helps IT professionals and vendors create and implement strategies that optimize their IT infrastructure and digital information. Evaluator Group services deliver in-depth, unbiased analysis of storage architectures, infrastructures, and management.  In business for over 20 years, the Group has provided services for thousands of end users and vendor professionals through product and market evaluations, competitive analysis and education.  www.evaluatorgroup.com; follow us on Twitter @evaluator_group

Inflation continues to raise prices all over the country. Because of this, fishing charters in Tampa Bay are forced to raise their prices to keep up.

Inflation has hit every individual and business hard nowadays. From rising prices of groceries to fuel, many businesses have either been forced to raise their rates to keep up with inflation or worst, shut down temporarily or permanently.

The fishing charter industry in Tampa Bay is no different. Even amid the summer months, which is the peak season for charter boats in the area, businesses have been forced to raise their prices or cut profits. With gas prices alone skyrocketing, it has cost expenses to rise as high, with some owners contemplating shutting down.

Not only has inflation negatively impacted fishing charter business and their prices, but their customers as well. People are now more focused on saving for their necessities that they have less money to travel and join charters.

“The business has slowed down quite a bit compared to the past years and it gets worse as inshore and offshore fishing charters have to deal with the lower customer rates and higher operational expenses,” says Tim Stocks, owner of Tampa Bay Fishing Charters. Before, the summer season would be fully booked for weeks to months ahead. Today, some weekends are still open and there aren’t many calls taken.

“Despite everything happening, we still hold hope that prices start to lower, particularly gas, and that we see more people looking for open dates.” Tim Stocks says. Here at Tampa Bay, there are many different species to catch inshore and offshore, with hopefully locals and tourists still joining charters to get a lot of action.

Tampa Bay Florida Fishing Charters is an online resource that connects anglers with the best, vetted fishing guides in Tampa, Florida for both onshore and offshore fishing adventures. For more information visit www.tampabayflfishingcharter.com

With inflation continually increasing prices in gas, food, and other necessities, Miami fishing charters are either forced to raise prices or cut profits to stay running.

Inflation has hit every industry badly, and fishing charters are no exception. If gas prices are high for those on the road, charter captains also have their fair share of problems with the rising expenses of maintaining business operations. Offshore fishing charters can burn over 100 gallons of gas in a single trip.

The high gas prices and increase prices for bait and tackle are forcing charter captains to raise their prices and potentially loose customers due to the higher cost to fish. Combine that with the fears of the looming recession and it has stirred big waves in the fishing charter industry.

“Inflation has definitely slowed business down, even more so since the pandemic. It isn’t as busy as it was before, and it may be due to the fact that people are more focused on budgeting for other things than on fishing trips at the moment,” says Tim Stocks, owner of Miami Fishing Charters.

Some charter captains have reported that the cost of operating their boats is almost about to double this year with fuel prices alone. Half-day charters per person that once cost $200 on average have now been raised to $250, while half-day private charters for six people went from $1,100 on average to $1,400.

With that said, there is still some hope. “Despite what inflation has done to businesses and individuals, there are still people who continue calling to join or book fishing charters. We’re hopeful that we see more locals and tourists booking charters, but we’re still unsure of what summer will hold for inshore and offshore excursions,” says Tim Stocks.