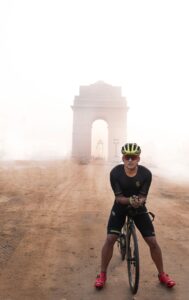 Amit came across many difficulties, challenges due to road conditions and unexpected traffic and after Gwalior, he faced massive climbs on the Satpuda mountain range. He finished his first 300km using the Scott Plasma RC inside 10 hours and created a great head start for himself. Later, he used the Scott Addict RC, for the remaining 700kms, in the hills, to get through the climbs quickly.

Amit Samarth, Scott Ambassador said, “It was great, although very intense having to keep head-on focus for nonstop 1035 kms till I reached the endpoint, Zero Mile of Nagpur. Thanks to the crew for working non-stop for 39 hrs. Apart from that, they were also diligently working on making all the arrangements for the ride.”

Jaymin Shah, Country Manager at Scott Sports India said “We at SCOTT are elated with Amit pushing boundaries and breaking records like he always does. We are proud to provide him with equipment and bikes that help him achieve his targets. Our bikes are built for the toughest athletes across the world and Amit is definitely one of the elite few. I wish him the best and millions of miles on SCOTT Products.

Amit Samarth and his team have to share the necessary details with World UltraCycling Association Record (WUCA) to get it ratified for the record. Once it gets ratified Samarth will be officially declared as the world ultra-cycling record holder.

Modair is already working for the welfare of persons with some disability in terms of motivating them to become self dependent as athletes/sports persons. The cricket match organised between the teams of Modair and Spice Jet comprising differently abled players and the scholarship announced by the Modair for the same is just another step in this direction.

Under the astute leadership of passionate aviator Mr. Atul Jain, CMD, Modair together with the experienced aviator Mr. Varun Mittal, CEO, Modair, the company also extends helping hand to credible charitable trusts, who are actively involved in supporting specially abled people. Apart from all these, Modair undertakes several other benevolent works for the welfare of the underprivileged and needy people of the society.

Mr. Atul Jain, CMD, Modair said, “We wish both the teams all the luck for this grand tournament and we are extremely hopeful for their outstanding performance. Modair remains deeply committed to its responsibility towards the development of this particular segment and particularly through this initiative we aim to support these true stars who have risen beyond their disabilities to shine bright in the open sky.”

Mr. Atul Jain has vast experience and expertise of conducting good social activities for the differently abled segment of the society.  Modair truly believes in giving back to the society and it follows an approach of responsible business. As part of its CSR activities, the company also offers employment to the physically impaired to give them a ray of hope and mitigate their hardships.

Modair started its journey in 2021, when it contracted its first aircraft lease agreement, a landmark that helped launch a new industry. The company started allowing easier access to capital for the world’s rapidly expanding general aviation industry especially the Indian Aviation industry and enabled low-cost air travel for millions of travellers.

Today, Modair offers one of the largest fleets of training and charter aircraft, besides the widest array of solutions to meet customer needs. With a modern, innovative fleet in service and on order, Modair is ready to drive the businesses of its clients several notches higher. Modair will expand its wings to every corner of the globe in the times to come. 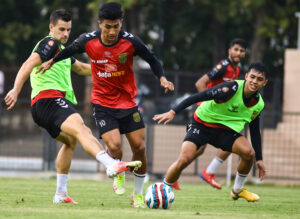 After a memorable victory over defending champions Mumbai City FC, Hyderabad FC are back in action on Thursday when they take on one of the in-form teams in the league in Jamshedpur FC in an away game at Bambolim.

The game will be the first of six for Manolo Marquez’s men in a hectic month of December, incidentally, all of them scheduled to be played at the same venue.

Currently in fourth, Owen Coyle’s Red Miners are fresh off a 3-1 victory over FC Goa and will be high on confidence going into this game.

However, HFC Head Coach Manolo Marquez believes his team is ready for the game but also knows that it will not be an easy one for his side. “For me, Owen Coyle’s team are always tough to face. Last season, both games were very equal and ended in a draw,” said Manolo.

“This season, they have players who are comfortable playing different styles of football and are happy to play with more possession. They also have a similar squad from last season and for me, they will surely fight for the top-4,” he added.

In attack, Jamshedpur have Nerijus Valskis and Jordan Murray, both of who were on the scoresheet in the last game. The likes of Alex Lima and Greg Stewart also bring in the experience.

Speaking about the opponents, Manolo Marquez said, “Jamshedpur is a really strong side. Valskis and Murray are there to finish chances but I think they have high quality all around the pitch. Fast wingers, technically good midfielders and experienced defenders; Jamshedpur have a strong squad, a compact team and we will have to work really hard to win this game.”

Hyderabad FC beat Mumbai City in the last game and will look to carry this momentum to the clash on Thursday. The likes of Joao Victor, Akash Mishra, Asish Rai, Mohammad Yasir and Hitesh Sharma have all been consistently effective and Coach Manolo has his plans set for Thursday’s clash.

“Irrespective of the results in the last game, I think the plans will be the same for both sides. We will stick to our style and so will Jamshedpur and I have no doubt that is going to be another close game in the ISL,” the Spaniard said, speaking about HFC’s approach to their next encounter.

On the team news front, HFC will continue to miss the services of Halicharan Narzary and Sahil Tavora.

The game kicks off at 7:30 pm on Thursday and will be telecasted live on the Star Sports Network with live streaming on Disney+ Hotstar and JioTV.

Aspire Academy is hosting the 7th Edition of its annual Aspire Academy Global Summit for football performance and Science virtually on Thursday (December 2), under the theme: ‘Aspire Fellows Meet Other Sports’.

The aim of the summit is to explore the possibilities of exchanging ideas between football and other sports on trainings, competitions and athletes.

Wenger, a world-renowned figure of authority on all football matters, is currently Chief of Global Development at FIFA. The Frenchman is best known as the most successful coach at English Premiership club Arsenal, where he served as manager from 1996 to 2018.

Pirlo was one of the most outstanding footballers of his generation – most notably with AC Milan and Juventus FC. Between 2002 and 2015, the 42-year-old played 116 times for Italy and, after retiring as a player, served as manager of Juventus in 2020-21.

The Aspire Academy Global Summit has established itself at the leading international annual conference on sports performance that has involved the world’s best football clubs and federations.

The summit sessions will be broadcast live on 2 December, across all Aspire Academy and Aspire Fellows social media platforms between 15:00 and 18:00 Doha time (GMT +3).

Anyone with an interest in sports performance improvement can register to join the Summit at https://bit.ly/3oWSo2J

Hyderabad fall to 0-1 defeat at Bambolim

Hyderabad FC kicked off their 2021-22 Indian Super League campaign with a 0-1 defeat to Chennaiyin FC here in Bambolim on Tuesday. Manolo Marquez gave starts to overseas trio Edu Garcia, Bart Ogbeche and Juanan, as Hyderabad put in a decent performance but failed to find a goal.

It started with an early change for Hyderabad, who had to get Halicharan Narzary off the field just 10 minutes into the game with a knock. Nikhil Poojary replaced him on the wing and Manolo’s men looked settled for most of the first half.

Chennaiyin were happy to sit back and frustrate the opponents. But it was a story of missed chances for Hyderabad as the likes of Mohammad Yasir, Edu Garcia, Asish Rai and Bart Ogbeche were constantly involved in chances that could have been converted on another day.

But both teams failed to test the goalkeepers as they went into half-time as they started. Chennaiyin started off the second half brightly, but it was a clumsy tackle from Hitesh Sharma that gave them a chance to get into the game.

Even as Hyderabad posed plenty of threat to Vishal Kaith’s goal at the other end Hitesh’s challange on Anirudh Thapa in his own box gave the visitors a penalty which was calmly converted by Vlagyimir Koman in the 66th minute giving Chennaiyin a precious lead.

Hyderabad pushed hard for the equalizer, as Manolo made four changes in the second half but his side failed to find the back of the net inspite of registering 11 shots, three of them on target.

Laxmikant Kattimani pulled off a brilliant save to deny Chennaiyin a goal with their only other shot on target as they managed to hold on tight at the back till the final whistle.

This result put an end to HFC’s 12-game unbeaten run and they will look to bounce back when they take on Mumbai City at Fatorda on Saturday, Nov 27, in what will be the first ISL game to kick off at 9:30 pm.

Dr. Amit Samarth, Scott Sports Brand Ambassador is going to attempt the World Ultra Cycling Record by cycling day and night on Saturday, 27th November 2021. He is going to commence at 2:00 am from India Gate and conclude at Zero miles, Nagpur where he will cover the distance 1037 Km to finish the race.

He will be riding Scott Plasma RC, one of the fastest bikes in India and it is a time trial bike and will ride with no breaks; no sleep breaks and his target to finish the race under 40 hours.

While talking about his training, he said “I do speed building rides or tempo rides of 75 to 100 km plus to develop speed Endurance and sustain speed for long distances. Also, I ride more than 600 to 700 km Cycling in one week with 2 to 3 strength training sessions. On weekend I do long rides, 150km -175km / 200-250 km and other days strength & interval training”.

When asked about Bike, he said “Scott Plasma RC is an aggressive bike and is extremely comfortable to ride. Also, it is very safe & extremely stable bike in rough road conditions. And it remains under control on rough roads. It maintains speed and momentum in different terrain.

Recently, he participated in Ride Across India 2021 where he cycled for 6017 km in 13 days 9 hours on Golden Quadrilateral of India that’s a world ultra-cycling record.

He has even finished Trans Siberian Extreme, the world’s longest bicycle race by cycling 9100 km in 25 days. He also participated in Race Across America, Solo Finisher which is also World’s Toughest Bicycle Race Distance 5000 km which he achieved to finish the race in 11 days 21 hours.

He is a winner of Deccan Cliffhanger 2017 and he has done IRONMAN 16 and 70.3 a toughest single day Endurance Sports race.

He is the first Indian to finish the RAAM in the last 36 years of history of the race in 11 days 21 hours. He also took part in the world’s longest bicycle race from Moscow to Vladivostok across 7 different time zones and extreme climatic conditions. 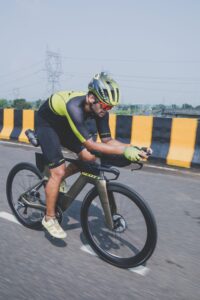 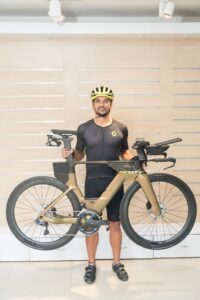