Focus is to finish the race, result would follow,” says Scott Sports-supported rider Harith Noah ahead of Dakar 2022 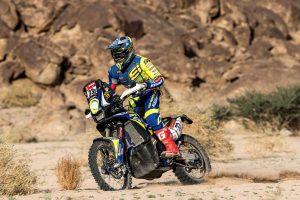 India’s celebrated rider Harith Noah will head to the 2022 Dakar Rally with a far better preparation time under his belt but insists that his primary focus would be finish the race, make every kilometre count and the result would follow.

The 26-year-old, supported by Scott Sports, had become the first rider representing India to register a top-20 finish at the Dakar Rally in what was only his second appearance in the event last year.

“I never looked at the results. So, I don’t know where I finish (in every stage). Every day I have a feeling, as the starting line-up is decided on how you finished in the last stage. For me I want to take it kilometre to kilometre and do the best I can. It’s such a long race and I want to do the best I can and the results will follow,” said Noah while reacting to a question on what were his goals for upcoming race.

Dakar Rally is considered to be one of the most challenging races in motorsports with riders expected to navigate through the desert and sand dunes.

Due to the coronavirus pandemic, Noah did get enough time to prepare before the 2021 edition but has been putting in the hard yards in Spain and France for the last few months ahead of the 2022 edition that starts on January 2.

He also spent a couple of weeks training in Moroccan desert and had planned to travel to the African country once again this month. But with Morocco closing borders due to coronavirus threat, he chose to train in Spain.

Speaking about what makes competing in the Dakar Rally so special, Noah insisted that unlike circuit races this event is test of a rider’s navigation skills, physical and mental fitness as even the participants can’t really know what to expect during the two-week competition.

“You don’t know what to expect. They give you information about the stages but not much. This year the marathon stage is in the first week. Normally, it’s in the second week. In fact, it is on the second day. That is very surprising.

“At Dakar you are sure to do mistakes. The important thing is how fast you get back on track and how long you think about the mistake. I have tried to work on it, tried to live in the moment. Try not to think far too long,” he said.

Asked about how the experience of the previous two editions helped him prepare for Dakar 2022, the 26-year-old said he has now learnt to stay calm in all situations. “I have also learnt lot of things preparation wise. Obviously when I went to Dakar for the first time, I had no idea. But now I know what food to eat, what kind of lenses, gears to take.”

Noah pointed out that the Scott Addict RC allowed him to work on his power & endurance when he was in India and feels that the Prospect Goggles and lens he has been using would also provide him better protection and visibility while racing.