The four Holy Relics of Lord Buddha came back to Indiaafter being displayed for 12 days at the Batsagaan Temple within the premises of Gandan Monastery, Mongoliaas part of celebrations of Mongolian Buddh Purnima.Union minister Shri Arjun Meghwal received the holy relics at Ghaziabad today. The duration of display of Holy relics had to be extended by a few days on popular demand from Mongolian people.

The President of Mongolia, Speaker of Parliament of Mongolia,Mongolia’s Foreign Minister, Culture Minister, Tourism Minister, Energy Minister, more than 20 MPs, High Abbots from over 100 Monasteries from Mongolia were among the thousands who paid their respects to the revered relics during 12-day exposition at the Gandan Monastery. On the concluding day the Interior Minister of Culture of Mongolia was present for the rituals. 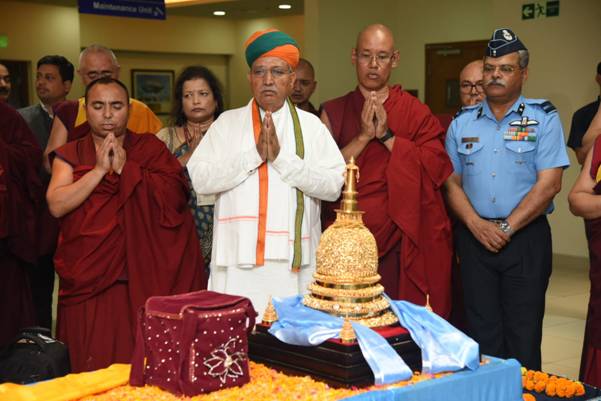 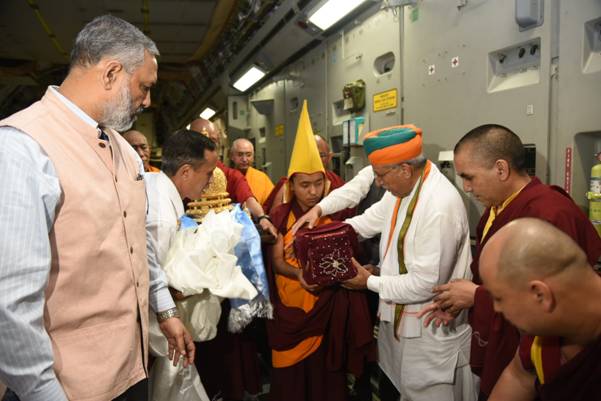 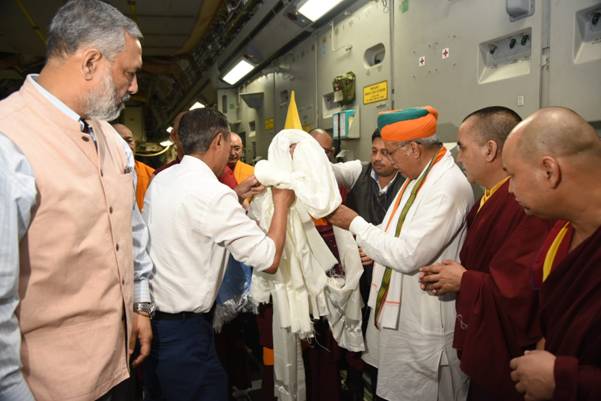 The Holy Buddha Relics, are known as the ‘Kapilvastu Relics’ since they are from a site in Bihar first discovered in 1898 which is believed to be the ancient city of Kapilvastu.

The Relics were accorded the status of a State Guest and were kept in the same climate control case as it has been kept presently at the National Museum. A special airplane C-17 Globe Master carried the holy relics back to India

In a first ever visit by an Indian Prime Minister to Mongolia, in 2015 Shri Narendra Modi visited Gandan Monastery and also presented a Bodhi Tree Sapling to Hamba Lama. Pointing out the centuries old Buddhist ties between the two countries, Shri Narendra Modi defined India and Mongolia as Spiritual Neighbours during his address to the Mongolian Parliament.

The last time these relics were taken out of the country was in 2012 when their exposition was held in Sri Lanka and were on display at several locations across the island nation. However, later guidelines were issued and the Holy Relics were placed under the ‘AA’ category of those Antiquities and Art Treasures which should not be ordinarily taken out of the country for exhibition, considering their delicate nature.

Dr Jitendra Singh will deliver the Keynote address on behalf of India at the UN Conference on the theme “Scaling up Ocean Action based on Science and Innovation for the implementation of Goal 14: Stocktaking, Partnerships and Solutions”.

In his departure statement, Dr Jitendra Singh said that under the leadership of Prime Minister Shri Narendra Modi, India would be providing science and innovation-based solutions for the implementation of Goal 14 through partnerships and environmentally friendly solutions. He said, India has well established collaboration and partnerships with UN Agencies and Research Institutions for bridging the methodology and data gaps on SDG indicators and working towards UN Decade of Ocean Science for Sustainable Development, 2021–2030, for clean, healthy, productive, predictive, safe and accessible ocean.

Dr Jitendra Singh said, with the participation of civil society and other relevant stakeholders, the participant nations will reaffirm our strong commitment to conserve and sustainably use the ocean, seas and marine resources. He added that greater ambition is required at all levels to address the dire state of the ocean. As leaders and representatives of our Governments, we are determined to act decisively and urgently to improve the health, productivity, sustainable use and resilience of the ocean and its ecosystems.

Dr Jitendra Singh informed that India has taken up several initiatives, programmes and policy interventions through different Ministries and Departments to protect the marine and coastal ecosystems, mangroves and coral reefs. There are 10 targets in Goal 14 to measure the health and services of water related ecosystems with emphasis on social, economic and environmental conservation. A total of 11 indicators have been identified at national level to measure and monitor the progress of these targets and data is collected on a regular basis for 9 indicators by monitoring the health/condition of coastal Waters and marine ecosystems.

At the end of deliberations, the Conference will adopt, by consensus, a brief, concise, action-oriented and inter-governmentally agreed declaration focusing on, and highlighting, the science-based and innovative areas of action to support the implementation of Goal 14 and a report containing the co-chairs’ summaries of the interactive dialogues.

The leaders will also reaffirm the declaration entitled “Our ocean, our future: call for action”, adopted by the high-level United Nations Conference to Support the Implementation of Sustainable Development Goal 14: Conserve and sustainably use the oceans, seas and marine resources for sustainable development, held from 5 to 9 June 2017.

In an exclusive media interview, Dr Jitendra Singh said that due to high monetary returns, farmers in hilly areas of Jammu and Kashmir are switching from traditional farming to aroma crops like lavender in a big way. He added that aroma crops are both drought and pest resistant, and CSIR is providing all kind of technical support for promoting this Agri Start-up boon in the UT.

The Minister informed that CSIR is also planning to introduce the aroma crops in other hilly States with similar climatic conditions like Uttarakhand, Himachal Pradesh and in North-Eastern States. Dr Jitendra Singh said, Centre’s Aroma Mission, ably supported by CSIR, is changing the mind-set of farmers and more and more of them are taking up the cultivation of aroma crops like lavender, lemon grass, rose and marigold for extracting costly oils to be used in many industries. He said, the oils selling about Rs 9,000 per litre are used in making incense sticks and also being used for room sprays, cosmetics and therapeutics.

Dr Jitendra Singh said, there is a need for widespread publicity that IIIM Jammu was helping the Start-ups in aroma and lavender farming to sell their produce. Prominent companies like Mumbai based Ajmal Biotech Private Limited, Aditi International and NavnaitriGamika, etc., are the primary buyers, he added.

Last month, Dr Jitendra Singh inaugurated the country’s first ‘Lavender Festival’ at Bhaderwah, the birthplace of India’s Purple Revolution and said that it became possible only because of the progressive thinking of Prime Minister Narendra Modi who after taking oath as PM in 2014 stressed that the regions which did not receive due priority in the past would be raised to the level of developed regions.

Dr Jitendra Singh informed that Aroma Mission is attracting Start-ups and agriculturists from across the country, and during Phase-I, CSIR helped cultivation on 6,000 hectares of land and covered 46 Aspirational districts across the country. More than 44,000 persons have been trained and several crores of farmers’ revenue generated. In the second Phase of Aroma Mission, it is proposed to engage over 45,000 skilled human resources with the aim of benefitting more than 75,000 farming families across the country.

Lavender cultivation has employed about 5,000 farmers and young entrepreneurs in geographically remote areas of J&K. More than 1,000 farming families are cultivating it on more than 200 acres.

Union Minister for Minority Affairs Shri Mukhtar Abbas Naqvi today performed Yoga with a large number of people from all sections of the society at historic Panch Mahal, Fatehpur Sikri, Agra in Uttar Pradesh on the occasion of International Day of Yoga.

The Minister said that he himself has been practicing Yoga for the last several years. Yoga is not just an exercise but it is “health science”. Yoga provides energy to our body as well as our mind. It helps in maintaining a balance in our lifestyle. Yoga not only positively changes the lifestyle but it also increases the level of health.

Shri Naqvi also said that the entire world is today celebrating “International Day of Yoga” with passion and enthusiasm which is a reflection of India’s growing prestige at global level.

On the widespread acceptance of Yoga, the Prime Minister remarked that “Yoga has now become a global festival. Yoga is not only for any individual, but for the entire humanity. Therefore, this time the theme of International Day of Yoga is – Yoga for humanity”. 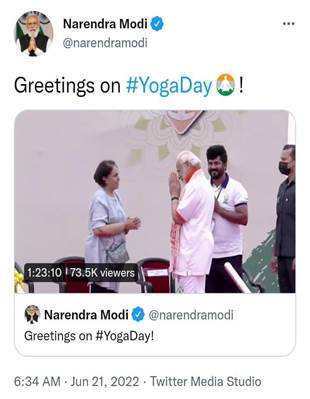 Union Minister for Health and Family Welfare, Dr Mansukh Mandaviya joined the 8th International Day of Yoga (IDY) 2022 celebrations with the citizens of Gujarat at the Statue of Unity, in Kevadia today. After two years of relatively symbolic celebration of Yoga Day to align with the Covid-19 pandemic, widespread enthusiasm and participation was observed across the country for this year’s 8th edition of the IDY 2022 to support the message of “Yoga for Humanity”. 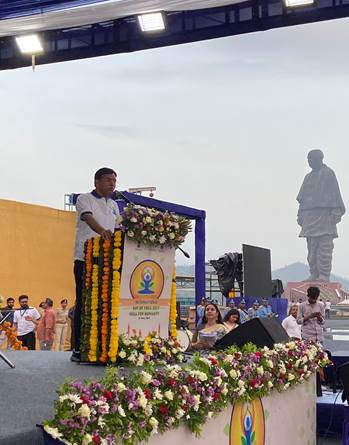 Highlighting the benefits of doing Yoga in everyday life, the Union Health Minister noted that “Yoga is an invaluable gift from our ancient tradition. Yoga embodies unity of mind and body, thought and action. It is a holistic approach that is invaluable to our health and our well-being.” He further added that “yoga is not just about exercise; it is a way to discover the sense of oneness with yourself, the world and the nature.” 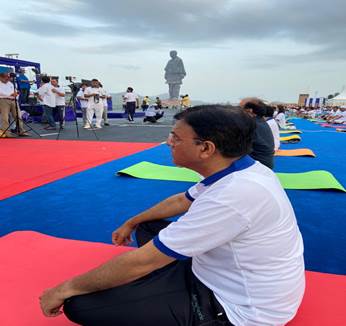 Speaking on the importance of preventive health, Dr Mandaviya underscored that “for a Samruddh Bharat, we need a Swasthya Bharat and for a Swasthya Bharat, we need Swasthya Nagrik. “Only a healthy national can build a developed nation. Let us pledge to be healthy and contribute to swasthya nation”, he added. He also informed that towards this effort, the government is planning to establish 1.5 lakh AB-HWCs across the country. Dr Mandaviya thanked the Prime Minister for making Yoga global. He highlighted that “world has accepted our culture, tradition from time to time. Yoga is an ancient physical, mental and spiritual practice that originated in India. Our great visionary leader Prime Minister Shri Narendra Modi ji had first proposed the idea of International Day of Yoga in his address during the opening of 69th session of the General Assembly. It was his mission that 21st June was declared as International Day of Yoga by UNGA.”

This year International Day of Yoga has witnessed many firsts, including a “Guardian Ring” program which entails live streaming of people performing yoga in 16 different time zones along with the rise of the sun. As part of the Azadi Ka Amrit Mahotsav, Yoga demonstration by Union Cabinet Ministers is taking place at 75 Iconic sites across India, including the Statue of Unity. A special digital yoga and static exhibition is also organized at Mysuru Dussera Grounds, Mysuru.