To mark the ongoing 4th Rashtriya Poshan Maah, the Department of Food and Public Distribution under Ministry of Consumer Affairs, Food and Public Distribution and Ministry of Women and Child Development jointly organised a webinar on ‘Rice Fortification: A complementary approach to address Nutritional Anaemia’ with technical support of the World Food Programme on Friday.

Honourable Prime Minister in his address on the 75th Independence Day (15th August, 2021) made an announcement that fortified rice will be provided through all Government of India schemes. 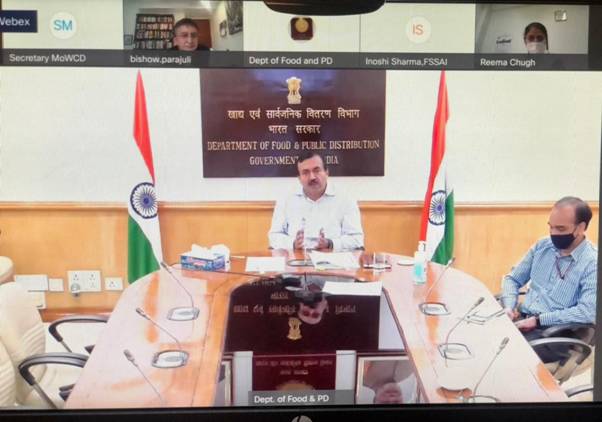 “We have been given a time frame that by 2024 we have to supply fortified rice to the entire public distribution system,” he added.

“I am particularly happy that Ministry of Women and Child Development (WCD) and the Department of School Education & Literacy are looking to the vulnerability of children and students,” he said adding on “They took decision to supply fortified rice for their Integrated Child Development Scheme (ICDS) programmes and Mid-Day Meal Programmes from 1st of April this year.  As a result of which, we got an opportunity to work through an entire ecosystem of rice fortification and prepare ourselves to something which was much bigger.” 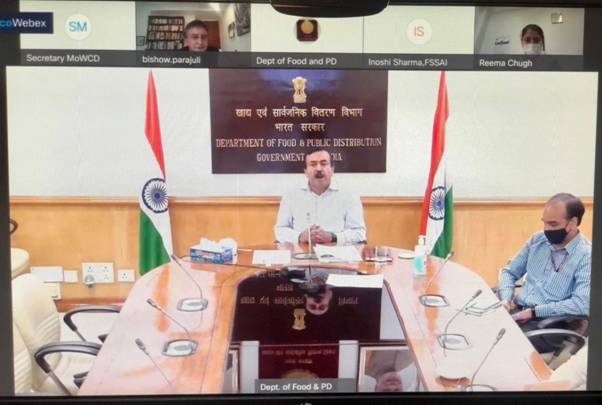 “India has been taking promising steps to ensure food security and improving the nutrition outcomes of its population, it is, therefore, about time that fortification is integrated into the larger response to address malnutrition in the country with the understanding that it will reinforce, complement and support ongoing nutrition improvement programmes such as supplementation & dietary diversification,” said Secretary, Department of Food and Public Distribution, Shri Sudhanshu Pandey.

“There is a need to amplify efforts to spread awareness about fortified rice and its benefits so that demand is created and acceptability for nutrient-enriched rice is better. All stakeholders must come together to create awareness campaigns using local languages,” Shri Pandey added.

Dr. Shariqua Yunus, Head, Nutrition and School Feeding Unit, WFP while talking about ‘Rice Fortification: Concept and process’ said that anemia continues to be a problem in the country. “Over last 10 years, the reduction in prevalence of anemia is slightly less than expected,” said claiming that fortified rice is the most sustainable solution to the health issues.

Pertinently, 7 States have already started the distribution of fortified rice. Approx. 2.47 Lakh MT of fortified rice is distributed till August 2021 under the pilot scheme. Production of Fortified Rice Kernels (FRK) is increased from 7250 MT in 2018 to around 60,000 MT yearly. (additional 25,000 – 30,000MT/year is also in the pipeline)

Nearly 3100 Rice mills have installed blending unit in 15 Key States with cumulative monthly blending capacity of around 18.0 Lakh MT for production of fortified rice. Standards have been established for fortified rice through regulatory agency such as Food Safety and Standards Authority of India (FSSAI). Similarly, Bureau of Indian Standards (BIS) has been requested to come out with a standard for extruder and blending machines for fortified rice production for uniformity.

Pallavi Agarwal, Joint Secretary, WCD during her address emphasized on the importance of sustainable diet. She said that the Ministry of Women and Child Development has planned a series of activities particularly on nutrition awareness, throughout the month in tandem with the States/UTs under POSHAN Mah. These awareness activities will be particularly carried out in the grassroots level.

A flagship programme of Government of India, POSHAN Abhiyan aims at improving nutritional outcome for children, adolescent girls, pregnant women and lactating mothers. The programme was launched by Prime Minister Sh. Narendra Modi on March 8, 2018 on the occasion of International Women’s Day from Jhunjhunu, Rajasthan.

The POSHAN (Prime Minister’s Overarching Scheme for Holistic Nutrition) Abhiyan directs the attention of the country towards the problem of malnutrition and address it in a mission-mode. Focusing on the aims of POSHAN Abhiyan, Mission Poshan 2.0 (SakshamAnganwadi and Poshan 2.0) has been announced in the Budget 2021-2022 as an integrated nutrition support programme, to strengthen nutritional content, delivery, outreach and outcomes with focus on developing practices that nurture health, wellness and immunity to disease and malnutrition.