With the arrest of two persons a case of scam by inducement to invest money online in Wine and Spice market has been worked out by District Cyber Cell, South-East District, New Delhi. 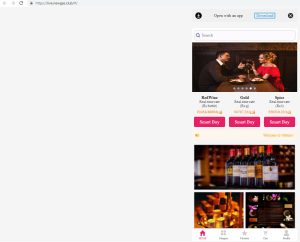 On the complaint received on Cyber Portal of Ministry of Home Affairs, a case was registered at PS Badarpur and the investigation was taken up by Cyber Cell South East District. In his complaint, the complainant stated that he met one of the accused persons, allegedly a South Korean national, on the dating app ‘Tinder’. He was promised huge returns on his investment and initially more than 20% returns were given to him in a short-span of 3-4 days on his investment of Rs 5,000/-. He was asked to visit and make account on the website namely www.h20.gbull.shop  (This was later changed to www.s67.ecoffee.fun and has now been changed mapped to a new domain name www.vip.newgas.club). The money was got deposited by the accused persons in 04 separate accounts of different companies.

After a technical investigation, on01.07.2021, coordinated raids were conducted at Secundrabad, Telangana and at Sector 23, Gurugram, Haryana. Accused Kondala Subhash, who is one of the Directors of M/s Golden Mark Technologies Private Limited and authorized signatory of the bank account was arrested by SI Chander Shekhar and his team, comprising of HC Rajender and Ct Naveen from Secundrabad and accused Nagaraju Karmanchi, who was in touch with masterminds and also operated the bank accounts as per their directions was arrested by Insp. Sandeep Panwar and his team comprising of SI Subhash Chander, HC Ashok Kumar, Ct. Brahm Prakash fromGurugram, Haryana. The whole operations were being run under the leadership of ACP Umesh Barthwal, ACP-Operations, South-East District, and overall supervision of Sh. Surendra Choudhary, Addl.DCP-I, South-East, New Delhi.

During the investigation, it was revealed that accused Nagaraju Karmanchi created at least 10 different companies whose bank accounts were used by Chinese nationals and he is still in touch with them and presently also working as Dummy Director in an online short term loan company namely M/s Rotter Pay Technologies Private Limited on a monthly salary of Rs 01Lakh and that whose real owners are Chinese nationals. He had worked in the same way before in a company that ran the application CashMama, where after his resignation as operations manager the then CEO of a company was arrested by Hyderabad Police in a Short term Loan app case. Nagaraju Karmanchi used to help/work as per directions of Chinese nationals in operations of fake bank accounts and operated many on their instructions, not only accounts he provided but many other also were operated by him. That he has purchased USDT CryptoCurrency worth crores INR in various transactions through cryptocurrency and illegal means.

On sustained interrogation, accused Nagaraju disclosed that he has studied up to 10th Class. After which he did Diploma in computer science. Accused Nagaraju did various jobs from Telecaller to Operations Manager in BPO Sector. In 2017, he joined a company running online short-term loan applications and came in contact with Chinese nationals, later on, he joined another such company which was closed down in Aug 2020. He was contacted by the same Chinees national Vendy whom he met earlier and further introduced to another Chinese national Luo and was asked to create a company in India. The deal with Vendy and Luo was that he would get 2-3 Lakh as one time payment for opening of the company and its bank accounts. They would also pay a monthly salary of Rs 25000/- per director and Rs 30,000/- as salary to the accused. Nagaraju was overseeing everything and for sending them OTP (One Time Passwords) received on the registered mobile number of Bank accounts. He used to provide net banking details i.e. username and password to Vendy or Luo immediately after creation of bank account. From July 2020 to Till Date, he has got created 10 companies for the Chinese nationals. Presently he was working in RotterPay TechnologiesPrivate Limited operating from Gurugram, HR, and operating application‘TakaCash’ and ‘RupeeLoan’ both are online short-term loan applications. He had also given the various personal savings bank accounts of his known person to Luo to be used. Luo directed him to purchase USDT Coin on Crypto Currency and then transfer the USDT purchased to the Address given by him. He used to get 2%commission on the total amount of USDT purchased and transferred. Apart from the companies he got created, Luo had asked him to log into Bank account of other companies using the net banking details provided by him and purchase USDTfrom Crypto Currency Exchange using the funds lying in that account. That he has purchased and transferred total USDT Coins to the tune of Rs 4 Crores for Luo.

Thereafter, accused Kondala Subhashdisclosed that he has studied up to 12th class and started working in BPO Sector. While working in a major IT company he came in contact with accused Nagaraju Karmanchi. Nagaraju asked him to be a Director in a firm being run by him and offered him a monthly salary.

The accused Chinese nationals contacted unsuspecting citizens through social media like Facebook, Whatsapp, Tinder, etc. They assured the victim that financial markets in India are not good and if they want good returns they need to invest in Wine Market OR Spice Markets, which give good and evergreen returns. The accused share the URL of their fake websites to invest money andask victims to invest only a small amounts. They gave good returns on this small amount to the tune of more than 20% in less than one week, in their bank accounts.

Enthralled with this the victim invests more money and sees their returns grow multifold. They are asked to enroll for a membership to get more returns. Also, if they wish to withdraw more than a threshold amount they are asked to wait for a specific time or to take a specified membership. However, when the victims could not take out the money they come to know that they have been created.

It has come to the knowledge that the Chinese nationals have hired people like accused Nagaraj above all over India to open Private limited companies so that they would be able to open current bank accounts with high transaction capacity.

Some bank accounts the Chinese Nationals were not able to operate in that case they direct their persons in India to purchase Crypto Currency mainly USDT on Binance Exchange (owned by a Chinese national, however now being operated from out of China) using Peer 2 Peerpurchase, using the cheated funds and transfer the Crypto Currency to theirgiven Crypto Address. The money is also being routed out of India through Shellcompanies. The transactions in those companies are being monitored.

As of date, the scammers were still active and were contacting random Indian nationals from the internet. They will have profiles with attractive profile pictures and will try to seduce or attract unsuspecting people. 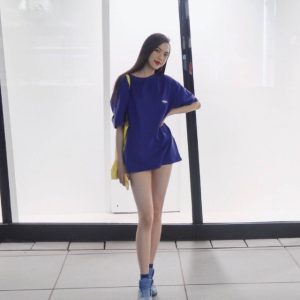 Above is one of the images being used by the Chinese Nationals. It is perhaps flicked off the internet of some other unsuspecting person. One of the numbers being used for the scammers is +60 11-2722 5893.

Popular TV Anchor Rohit Sardana has passed away today. He was suffering from COVID-19 and also had cardiac issues. The exact cause of death is not yet clear but it looks more like a combination of the two. Till yesterday, he was tweeting and retweeting messages of people to help them get assistance from the authorities during this terrible pandemic.

Rajdeep Sardesai said, “Rohit and I had differing political views but always enjoyed debating without any rancour. We did a show one night that finished at 3 am (think it was SC verdict on Karnataka) after which he said, ‘boss aaj maza aa gaya!’ He was a passionate anchor journalist. RIP Rohit Sardana.”

Senior India Today journalist and anchor Rahul Kanwal said “Rohit Sardana was the sharpest young anchor I have met. Superb command over Hindi, brilliant with his turn of the phrase, precise questions, clear in his thinking, loved by the masses, warm and humble off the screen, he was destined for great things. Our newsroom is in deep shock.”

#ModiMustResign is the latest hashtag that is highly trending on twitter. It seems that the Prime Minister is falling from grace with his handling of the current pandemic situation. Many have made a mockery of the comments by the minister. On being asked specifically, they said that Modi’s attitude at this time, more than anything else,is dispeasing them. He has expressed no regret and has shown no compassion to thousands dying everyday due to COVID-19.

Here are some of these tweets: 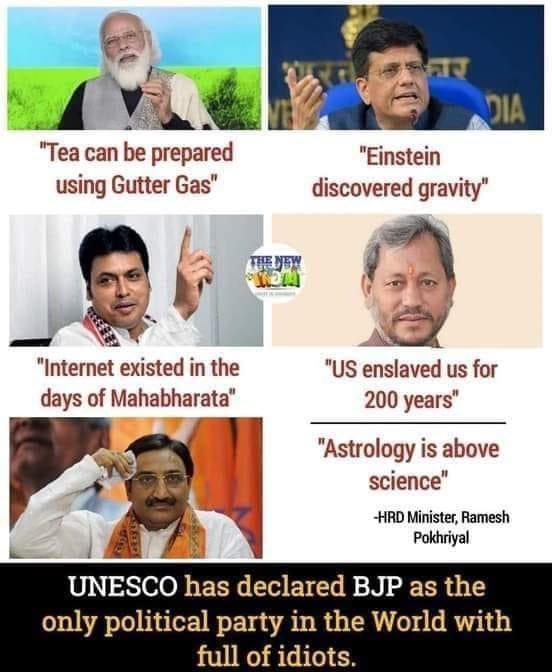 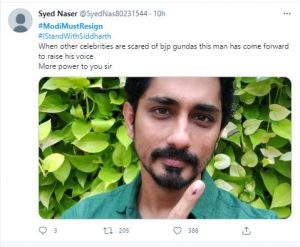 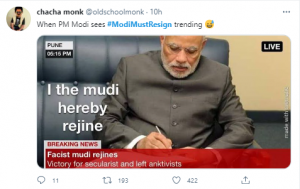 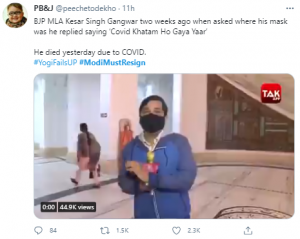 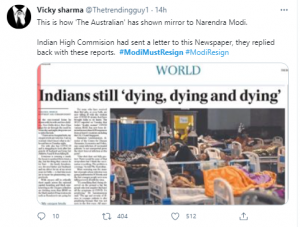 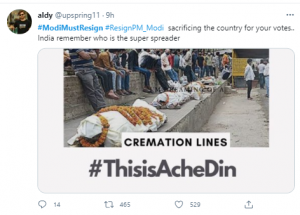 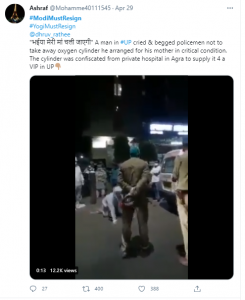 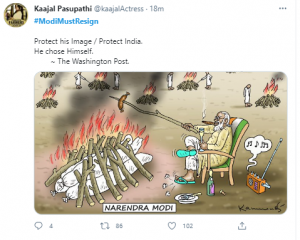 Many were too gory to post. For a party that has come to power by social media investment and branding, this must come as an eye opener that it must perform now.

After endless obstructions, Delhi Police now starts a dedicated lane for Emergency Vehicles in the lockdown

Delhi is finding the current lockdown extremely perplexing. There are numerous roads that have been closed using chained and locked iron barriers. These include Chirag Delhi to Sheikh Sarai Road, S Block Panchsheel Park Road, several roads in Patel Nagar, Nilothi to Hastsal Road and others. They have also setup barriers across the city. With numerous emergency calls due to the sheer magnitude of emergencies due to government failure in mananging COVID-19, these obstructions and diversions have apparently been responsible for multiple delays and possible deaths.

One citizen had commented, “Is the police trying to end COVID-19 by confusing the virus which way to take with these diversions?” Obviously that’s not the intention, the intention is perhaps to divert traffic to barriers where police can check for their passes. However, it has done nothing but created confusion.

Delhi Police has now setup dedicated lanes for ambulences where they can smoothly pass through without need to be obstructed for police checks. This is a welcome step to help emergency vehicles move more smoothly.

There is growing prostitution racket in Munirka. There are multiple prostitutes that solicit the customers from around 11:00pm onwards at Munirka red-light near Vasant Vihar Depot and adjoining areas. It is quite sad to see that it is the same area where the infamous Nirbhaya kand had happened which caused a national shame for the country. The racket started during the first lockdown and continuing now. Everytime you see a police PCR moving-by, you would think that there would be an action taken against them but it has never happened.

It seems to be in connivance with certain policemen who tend to look away. Infact, the residents have reported policemen talking these prostitutes openly. During the lockdown, Delhi Police is supposed to enforce a curfew but it seems that for them these are essential workers are exempted from lockdown.

However, the racket has been continuing unabated.

With the massive data trove available freely on the web, BigBasket has done something to secure its users. While it has done nothing to notify its users of the breach, it has quietly disabled the password authentication. The fields leaked in the database included:

It was leaked by a user with the details below on a popular hacking website for free. 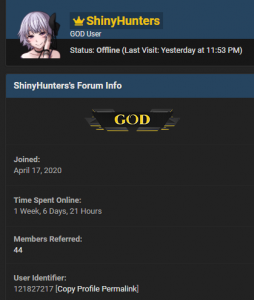 To counter this leak, BigBasket has just disabled password authentication and will only use OTP. However, what to talk about the safety of private information of over 2 crore users (including the author)? 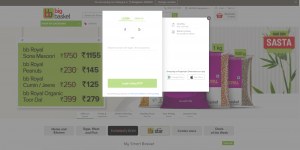 It is time that these giant companies also do something for data protection and own-up to their responsibility.