Troopel.com: Nomadic Community ; Even 10 percent of the nomadic tribes could not become part of the mainstream of our society 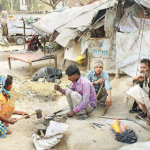 Since ancient times, the liberated nomadic and semi nomadic tribes have played an important role in preserving the folk art and folk culture of India. Despite this, 74 years after independence, the attention of our country and society has not gone towards these tribes, while all of us are well aware that due to the revolutionary cooperation of these people, we have become part of independent India.

It is an irony of our country that even 10 percent of the total population of these tribes has not been able to join the mainstream of our society and is socially, economically, educationally and politically backward. The liberated nomadic and semi nomadic tribes of India comprise about 840 castes. Since the independence of the country, so far only 8 commissions have been formed for these communities, which have directly or indirectly recommended the inclusion of nomadic tribes in the list of backwardness and safe reservation, but the political participation of this community is negligible. Reason: No report of any commission was tabled in Parliament. The report of the Balakrishna Renke Commission constituted by the UPA Government for the nomadic community and the Dada Idate Commission constituted by the NDA Government have not yet been submitted in Parliament.

Nomadic communities in India have a population of more than 13 crores, but in the last 74 years, policy emptiness and institutional failure have brought the troubles of this society to a peak. If you want to give revolutionary support in getting back the lost identity of this society in India, join Troopel.com.