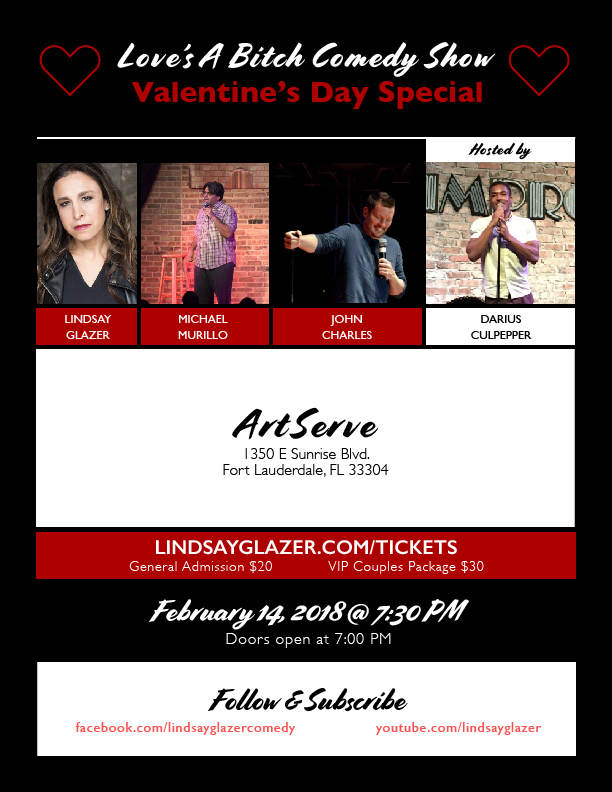 Fort Lauderdale, FL – Comedian Lindsay Glazer, currently touring the country as The Alpha Bitch (with dates already scheduled overseas for 2019), will headline a special show at ArtServe in Fort Lauderdale on February 14. The “Love’s A Bitch Comedy Show” will also include comedians John Charles, Michael Murillo, and Darius Culpepper.

Glazer, whose in-your-face rants have made a splash on YouTube, has quickly become a popular speaker on the college circuit where she mixes an empowerment message with intelligent, aggressive comedy. Now on a club and theater tour performing a full stand-up set, fans can expect a heavy dose of sarcastic, adult content at the Valentine’s Day show covering everything from marriage to motherhood to millennials.

According to Glazer, being an Alpha Bitch is simply an extension of who she really is off-stage, whether furthering her career as a criminal defense attorney, keeping her husband in line or raising her Alpha Baby.

“I say the things people are thinking, but wouldn’t say in polite company. But I don’t have to be polite. It’s not in my nature to keep quiet,” Glazer explained. “I love getting to know my audience and talking about the things that annoy both men and women. Even if we’re married to them!”

Glazer’s appearance will be one of her few Florida performances this year. She’s already taken the stage in 17 states in 2018, including an invitation to Gilda’s LaughFest in Michigan, an invite-only comedy festival named after the late Gilda Radner.

For the Valentines show, Glazer promises a strong lineup and plenty of laughter. “It’s going to be a lot of fun,” she said. “If you’re looking for a safe space to share your emotions, find a drum circle. If you want to laugh your ass off, stop by and see us.”

Showtime is Thursday, February 14 at 9:00 p.m. ArtServe is located inside of the Fort Lauderdale Library at 1350 E Sunrise Blvd. Early-bird tickets are $15 until January 10 then $20 until the day of the show, with a VIP option that includes special seating and other perks for $30. To purchase tickets, visit https://lindsayglazer.com/valentines-comedy-show/ and use code PRESS for an extra 10% off.