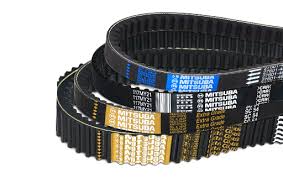 Automotive Belts are power transmission belts that provide a connective link between two parallel rotating shafts, these shafts are fixed with pulleys upon which the belt is looped. Hence, power transmission occurs by friction from the driving shaft to the driven shaft smoothly through these belts. Automotive belts are also utilized as timing belts to synchronize the functions of engine valves via a camshaft. Automotive belts used in vehicles are designed as endless belts and are commonly manufactured from materials such as neoprene, chloroprene, and ethylene propylene diene monomer rubber (EPDM rubber). The inner surface and the cross sectional area of the automotive belt differs according to the function the belt needs to perform. Automotive functions such as air-conditioning, power steering function, water pump function and drive alternator are performed by the V-belt while valve timings through the camshaft is usually performed by the toothed belt. Serpentine belts are newer form of automotive belts where all the automotive functions, collectively known as engine accessories, are performed by the connections through a shaft and pulley system is done by a long single endless belt. This form of belt negates the usage of multiple V-belts in an automotive engine.

The Production numbers of automobile worldwide is on a constant increase on a yearly basis as per the demands witnessed in many developing countries. This factor is the prime reason for fueling the growth of the automotive belts market. Automotive belts primarily function through friction between the pulley and the belt which is susceptible to wear and tear due to continuous usage leading to decreased performance, engine efficiency and slippage. This problem is usually rectified by the replacement of the belt prompting the growth of the automotive belt market in the aftermarket segment as well. The influence of the Environmental Protection Agency to reduce greenhouse gases emission and control of pollution has pushed the automotive vehicles manufacturers to produce highly efficient and less polluting engines that require very precise and long lasting automotive belt. This factor has also fueled the growth of automotive belts market as more and more vehicle manufacturers opt for belts that are efficient and environmental friendly.

Automotive Belts Market can be segmented by vehicle type, sales channel and type.

By vehicle type, automotive belts can be segmented as:

By sales channel, it can be segmented as:

By type, it can be segmented as: