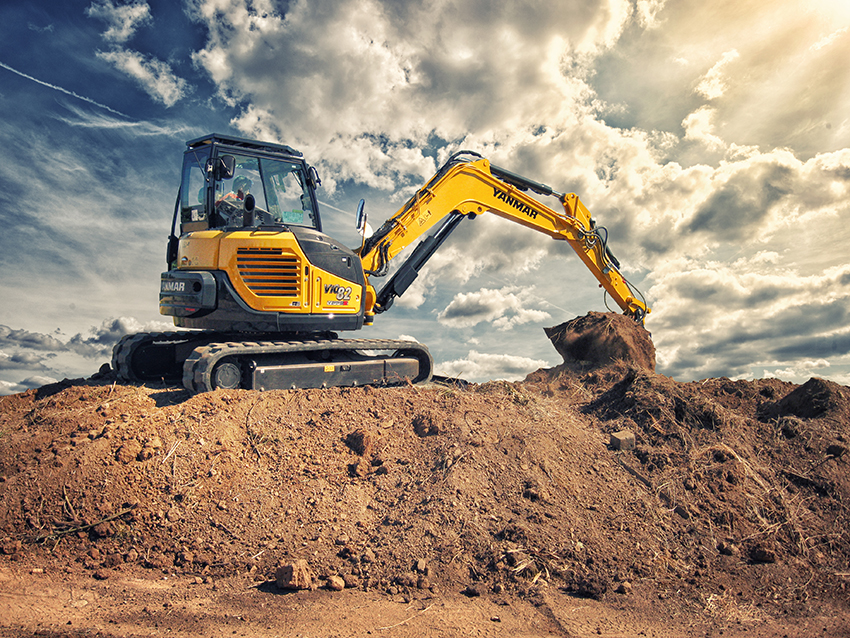 Bezannes, November 7, 2018 – The ViO82, latest midi-excavator by Yanmar, further enhances flexibility of use. The highly compact machine benefits from Yanmar´s unmatched experience in developing Zero Tail Swing excavators: It is extremely versatile and thus the ideal partner to increase productivity, especially in urban environments and where space is limited.

The ViO82 is equipped with the new Yanmar ViPPS2i hydraulic system which is based on the aggregated power regulation of two independent variable flow piston pumps and a multiple combination directional control valve. Two independent pumps are individually controlled in accordance with to the load, supplying just the required quantity of hydraulic fluid for the operation performed. The system provides the operator with enhanced ease of use by reducing the loss of hydraulic pressure, even during combined operations of arm and boom. The new electronic hydraulic pump regulator adjusts its flow rate to the engine”s performance. This means that the engine power is perfectly exploited, the machine”s performance optimized – allowing smooth and simultaneous performance in all the operations.

Reducing fuel is a key topic for Yanmar. The ViO82 benefits from the most advanced technology developed by the leading manufacturer of industrial diesel engines. The 55,6 HP TNV engine is equipped with a common rail direct injection system. The fuel injection is managed and fine-tuned by the Electronic Control Unit ensuring cleaner combustion and optimized engine working conditions. Yanmar’s 4TNV98C-WBV1 engine is the result of continuous efforts to achieve technological progress in fuel consumption and emissions. The cooled Exhaust Gas Recirculation (EGR) drastically reduces the nitrogen oxides (NOx) and the Diesel Particulate Filter (DPF) cleans up exhaust emissions (PM). Furthermore, Yanmar has developed an exclusive regeneration system in order to prevent clogging and cleaning down-time.

In addition, an Engine Controller Unit (ECU) manages the RPM according to the torque optimizing the engine load. This enables to save fuel while increasing the productivity of the machines. The fuel consumption is even further reduced by the Auto-Deceleration system. It enables the engine to switch back to idle if the operator doesn”t touch the operating levers for 4 seconds. The Eco-Mode effectively controls the engine speed particularly when duty cycle requires little power and low speed of movement.

Putting the operator in the center of its design initiatives, Yanmar has developed the “Universal Design” concept which is focused on ergonomics. Combined with a large leg room it improves the comfort and safety of the operator. The ViO82 design provides an ergonomic environment, excellent visibility and exceptional safety. The shape of the cabin provides the operator with an optimal 360° visibility in order to improve the safety on the jobsite and enhance work efficiency. The air suspension seat has numerous possibilities of adjustment to give the optimal seating position. The instrumentation panel has been redesigned as well as the armrests, which further enhance the operator”s comfort. The ViO82 is equipped in standard with a FOPS2 Top Guard for an enhanced protection in harsh environment.

Since the invention of the ViO concept in 1995, Yanmar has been the leader in designing the most compact excavators. The ViO82, once again, impressively underlines the company”s leading position.