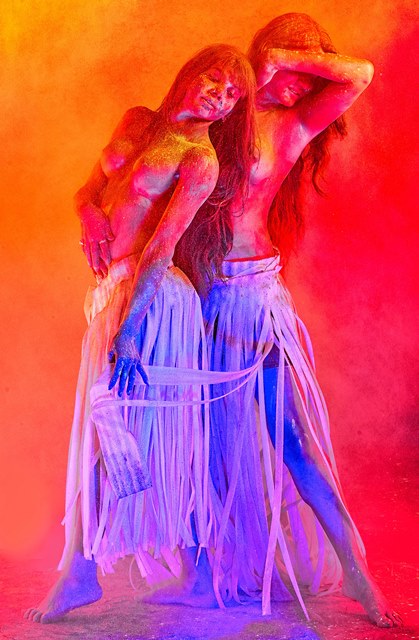 –
-Transgender is defined as the people who have gender expression differs from their assigned natural gender. An effort made to touch upon the sensitive core of humanity, to bring into public domain an issue of gender particularly Transgender or Trans-women lies at the heart of a new suite of works developed by the photographer/artist L. Ramachandran. The famous playboy photographer has perfectly captured their expressions and marvellously pictured it in the frame. In his present suite of works, he has given a break to fashion photography, which concerned the representation of sensuous, opulent and vibrant female bodies to bring in a sensitive awareness of the social reality of so-called third gender or the transgender.  Their marginalised presence in society had preoccupied him for a long time, consequent to his study on gender and marginalisation as a concern and issue which now needed focus to highlight their woes.
–
-His efforts in this direction were consequent to reading a book written by the author Paal Suyambu that opened painful vistas on their lives, taking a decision to configure their circuits of experiences particularly of rejection and non-acceptance by the society in his photographic frames. Through the medium of photography, he desired to document their everyday travails by bringing about a correspondence between his concepts and the aesthetics of his materials.
–
-He has a series named ‘Bond’ that supports this cause in which he says, “Bond in human relationships is characterised by emotions as affections and trust leading to confidence building and eventual happiness. A bond thus shared is a matter of soul where discrimination of any sort ceases to exist. Highlighting here the issues that the LGBT community faces. The models here radiate with happiness oblivious to society’s judgement.” The varied concepts related to ‘Struggle for Freedom”, “Multi Faces”, “Posh Trans”, “Adoration of Beauty”, “Hopeless Soul”, “Fantasy “Wedding”, “Bond”, “Transformation”, “Angst, Anger and Pain”, “Gothic”, “Blossoming”. These varied concepts were visualised by the artist/photographer insight-fully, subjecting it to intellectual pondering juxtaposed with the metaphoric portrayal that made the process of visual reading not only complex but also enigmatic. With a strong core concept, the aesthetics had to be visualised; and it was here that Ramachandran established his credentials as an artist – planning and structuring the juxtapositions of colours, the textures, the appropriate props, and seminal the lighting, which was an emotive and expressive drawing tool.
–
-L.Ramachandran is a self-taught photographer who has a huge passion towards photography and arts. He is the first Playboy photographer from India.  He has recently received two prestigious awards, a doctorate for contribution in photography form international Tamil university and ATIM’s top 60 Masters of the Contemporary award.