India has most Outward Migrants in 2017: ADB Report 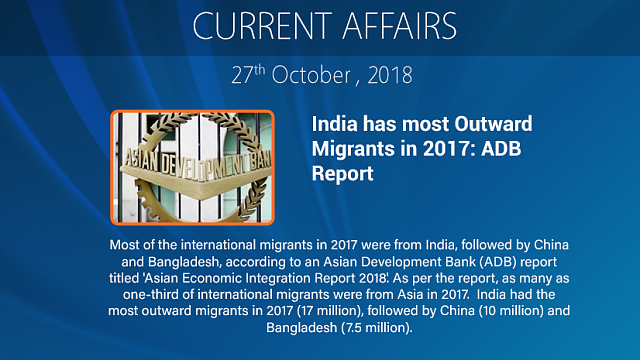 Most of the international migrants in 2017 were from India, followed by China and Bangladesh, according to an Asian Development Bank (ADB) report titled ‘Asian Economic Integration Report 2018’. As per the report, as many as one-third of international migrants were from Asia in 2017. India had the most outward migrants in 2017 (17 million), followed by China (10 million) and Bangladesh (7.5 million).

Chanakya IAS Academy aims to develop amongst its students a competitive attitude along with sound academic base with quality teaching and individual attention as its hallmark. The Academy organizes seminars and workshops with the help of civil servants and experts in soft skills to train the aspirants to think, feel and express like administrators. This comprehensive approach towards UPSC preparation
has received an overwhelming response and has led to the pan India presence of Chanakya IAS Academy.