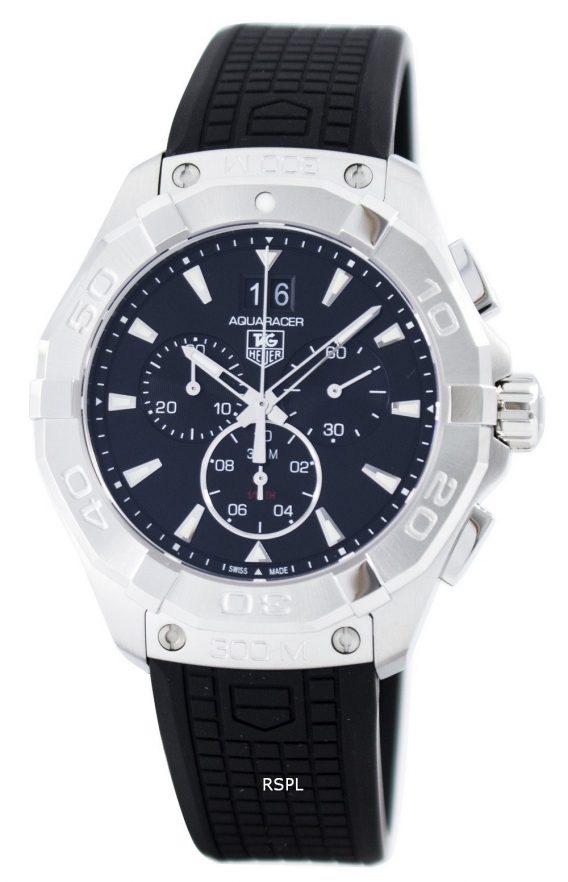 The Tag Heuer Aquaracer Chronograph Quartz Swiss Made 300M CAY1110.FT6041 Men’s Watch is not about any incredible complication; neither it abandons accessibility. It’s just a nice watch with refreshing aesthetics and is a worthwhile gateway piece to the world of fine horology.

The Tag Heuer Aquaracer Chronograph Quartz Swiss Made 300M CAY1110.FT6041 Men’s Watch carries the legacy of the TAG Heuer signature dive watch that debuted in 1982. TAG’s commitment, in this regard, is admirable; it’s a proof point that the demand for quartz still exists!

To build the Tag Heuer Aquaracer Chronograph Quartz Swiss Made 300M CAY1110.FT6041 Men’s Watch, it took more than just swapping out the movement from the 300 meters WR Aquaracer chrono automatic. That includes introducing an anodized aluminum bezel (used to be ceramic); removing the magnifying cyclops from the crystal and bringing in a clean, sunburst effect of the dial as opposed to the former textured shutters impression and the luminous seconds hand. It’s a simpler configuration that stays true to the Aquaracer DNA by preserving the bold handset and the applied indices at the first glance. Beyond that point, are the screw-down case back (with an engraved diver’s helmet) and the studs on the bezel, which provides a substantial grip under wet conditions, with the diving gloves on. These are the brand’s semi-permanent hallmarks of the Aquaracer collection.

Inside the Tag Heuer Aquaracer Chronograph Quartz Swiss Made 300M CAY1110.FT6041 Men’s Watch is a Ronda 6003 movement. This is a staple for the TAG Aquaracer-s; a serviceable, gold-plated movement comprising four jewels. It is a movement that guarantees a lifetime of reliable, worry-free service with a battery replacement required every 36 months (with frequent use of the stopwatch function). If not, it runs for another four more months.

The dial has three counters which measure 1/10th of a second, chronograph hour and a running-seconds counter. The central long hand measures the chronograph seconds. The indexes are polished and hand-applied; polished and faceted. The case material is fine-brushed and polished steel while the scratch-resistant sapphire crystal comes with a clear coat of anti-reflective liquid.

All that said, the Tag Heuer Formula 1 Chronograph Automatic 200m Men’s Watch stands out due to its elegant proportions and an extremely visible dial. It is an attractive choice for anyone looking for a wrist wear that’s meant for tough business. If babying a watch is what you like, the Tag Heuer Aquaracer Chronograph Quartz Swiss Made 300M CAY1110.FT6041 Men’s Watch is not meant for you. It is meant to be worn and used the way an active man would want to.

Bottom line: Powered by the simplicity of a Swiss quartz movement, the Tag Heuer Mens Watches is a convenient, attractive and well-made go-to watch in its perennially capable Aquaracer range.