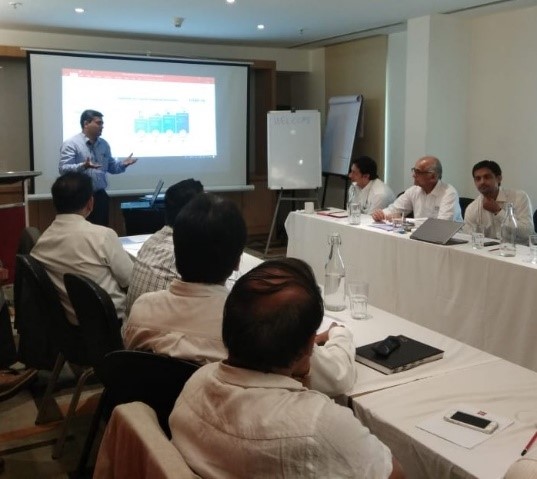 Recently, Intellore was invited to speak to the audience of sales & marketing professionals of a leading and well-established Pune-based company that manufactures products in dimensional metrology mainly for the automotive and other engineering industries. While the company’s sales staff had heard about Industrie 4.0 and Industrial IOT, they were curious to understand the terminology, gauge its impact on their industry and brainstorm its relevance in future-proofing their product roadmaps.
Narayan Gokhale – Head of Sales & Marketing at Intellore Systems delivered the key note address.
He started off by highlighting the big picture – How over the past 5 to 10 years conventional companies (industry participants) have been disrupted – by highlighting the staggering market capitalization of “network brands” such as Facebook, Google, Amazon, Uber, Airbnb etc. and comparing them with “traditional brands” such as Hertz, AT&T, Starwood and Walmart, emphasizing that “Network Orchestrators” deliver value through connectivity. Digital networks and platforms are eating the world by changing all the rules of business, including the sources of value, the ways that organizations deliver it, and the mental models or beliefs that guide organizations and their leaders. This transformation is creating problems for existing firms with established, non-digital, non-network business models.
By using this pitch and mixing with day-to-day examples, the digital transformation of the Mfg. Industry -namely, Industrie 4.0 and Smart Service World topics were introduced. The world as we know and experience it today has been shaped by three major technological revolutions. The fourth industrial revolution promises to marry the worlds of production and network connectivity in an “Internet of Things” making “INDUSTRIE 4.0” a reality.
TWO of 10 “Future Projects” identified by the German government as part of its High-Tech Strategy 2020, the “INDUSTRIE 4.0” project and its successor “SMART SERVICE WORLD – Internet-based services for the economy” project, represents a major opportunity for Germany to establish itself as an integrated industry lead market and provider. Both these put together is also called as “The Internet of Things and Services”
Germany’s position as an embedded systems technology leader gives birth to enabling cyber-physical system (CPS) technologies which ingeniously marry the digital virtual world with the real world. Cyber-physical production systems (CPPS) made up of smart machines, logistics systems and production facilities allow peerless ICT-based integration for vertically integrated and networked manufacturing.
To explain Intellore Systems’ Digital Transformation Services, Narayan went on to give an example based on the project that Intellore is doing for a customer (OEM), by highlighting various stages of their digital transformation journey – “product or an embedded-system” to “networked-embedded-system” to “cyber-physical system (CPS)” and finally to what Industrie 4.0 calls “Internet of Things, Data and Services”, culminating in to OEM’s new offering of “Product-as-a-Service (PaaS)”. Many North American companies call this concept as “Product-Service Hybrids”. He referred to another project that Intellore is executing by highlighting how their customers’ “offerings” evolved from “Product or Equipment” to “Equipment Services” to “Information Services” and simultaneously their “Go-to-Market (GTM) Approach” evolving from “pre-digital product line” to “digital product line” to “new market segment” again leading to a new business model of “Product-as-a-Service (PaaS)”
As the company is yet to embark on its Industrie 4.0 (digital transformation) journey, Narayan advised them to refer to “Guideline Industrie 4.0: Guiding principles for the implementation of Industrie 4.0 in small and medium sized businesses” from the VDMA (German Engineering Federation) that is regarded as a practical tool for the identification and implementation of company-specific approaches to Industrie 4.0.
He specifically advised them to look at “The Toolbox Industrie 4.0” that is a key element of this guideline as it combines the different application levels of Industrie 4.0 in reference to product innovations and production-related technical applications. The application levels are each broken down into five technological and sequential development stages. The Toolbox Industrie 4.0 becomes the starting point for classifying the fields of expertise offered by the company and thus serves as a basis for new ideas during an Industrie 4.0 implementation process.
Narayan concluded by saying that tomorrow’s business economy would undoubtedly be dominated by “network orchestrators” and reiterated not to take anything for granted, as their competition might come from unexpected quarters and disrupt their industry’s conventional business model. He challenged the audience to rethink how value is created for their customers – can their products can be sold as “Gauging-as-a-Service” or “Metrology-as-a-Service”?
The Managing Director proposed a vote of thanks and assured the audience that the transformation will start from the top leadership team and announced that henceforth Industrie 4.0 to be topmost on their agenda of all internal meetings, especially for R & D, product management and marketing functions.