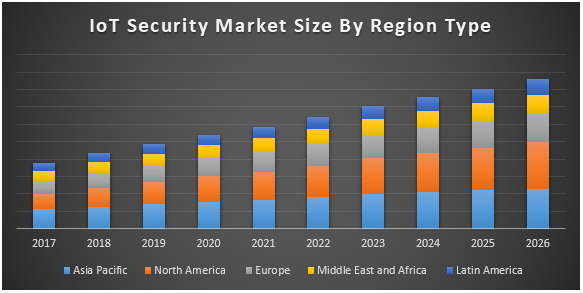 Global IoT Security Market is expected to reach at a CAGR of about 40 % during a forecast period of 2017-2026.

The need for regulatory compliance is one of the major factors driving the market growth. With a huge amount of digital information being transferred between people, the government of several economies are taking steps to secure networks from hackers and virus threats by establishing strict regulatory structure. The emergence of the smart city concept is expected to offer a sound opportunity for the market growth in the forecast period. Governments in the developed economies have already taken steps to develop smart cities by developing Wi-Fi hotspots at multiple locations within a city. Ransomware remained as the main threat, with the Petya or Not Petya and WannaCry attacks taking down systems worldwide. Growing need for data-centric safety, an increase in risk-based adaptive security for IoT ecosystem, will propel the IoT Security Market.
Growing awareness about the benefits of IoT security solutions is resulting in the mergers & acquisitions of cybersecurity startups by large enterprises such as Red Hat, Cisco and Microsoft for securing and strengthening their IoT portfolios and cloud services.

IoT Security MarketIn terms of security IoT Market is fragmented into Cloud security, Network security, Endpoint security, Application security. Out of this Network, security is expected to hold the largest market share. Networking is the backbone of IoT ecosystem and rising number of network protocols is one of the major reason for the growth of network security. Network security deals with securing the complex IoT network which connects IoT devices to back-end support systems on the internet, Wireless communication is carried out with the help of various secure protocols such as LPWAN, Zig-bee, 6LowPAN, Bluetooth, Z-Wave, and NFC.

Technologies such as Bluetooth Low Energy, IEEE 802.15.4, and IEEE 802.11ah plays a significant role in IoT connectivity. Innovation and increasing use of 2G, 3G, and 4G Long-Term Evolution (LTE) wireless networks have in turn also made these networks increasingly susceptibility to cyber-attacks.

North America is expected to hold the largest market share in the IoT security market Growing adoption of IoT in a single smart UI of smartphones, PCs, and tablets and rising cybercrimes will foster the North America IoT security market. Demand for integrated IoT security solutions in various sectors such as government, defense and healthcare in Asia Pacific countries will propel Global IoT Security Market growth in the region. Innovation and increasing penetration of broadband services networks in developing regions like Latin America and the Middle East and Africa have in turn also made these networks gradually defencelessness to cyber-attacks fuelling the need for IoT security devices and systems in Latin America and MEA.