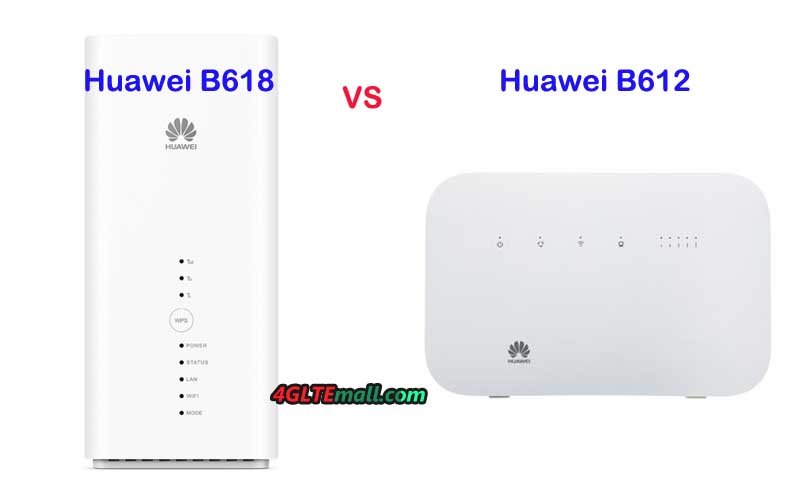 Since more and more Huawei LTE WiFi routers(https://www.4gltemall.com/4g-wireless-router/huawei-4g-lte-wifi-router.html) are available in the market, sometimes they had the similar name which may confuse the customer. At the beginning of 2018, Huawei presented a new 4G modem router(https://www.4gltemall.com/4g-wireless-router.html) Huawei B612, following the Huawei B618 router. As you can see, the Huawei B612 and Huawei B618 router names are very similar. For those who are unfamiliar with Huawei routers, they may don’t know what the difference is between the Huawei B618 and B612 LTE router. If they want to buy one of the two routers, they may be in trouble to make the decision which one to buy. Today, we will compare the two routers specs and features so the customers may get some reference.

Huawei B612 VS B618 Appearance and Interfaces

Simply from the router name, it may not be easy to identify the two routers, but if you see them, it would be easy to recognize. The Huawei B612 4G LTE Modem(https://www.4gltemall.com/huawei-b612-4g-lte-cpe.html) is in a traditional router shape, on the front, there are indicators for Power, Mode, WiFi, LAN and Signal. On the back, there are 3 LAN ports and One port for both LAN & WAN. And there is also a telephone port with the Ethernet ports. Like other Huawei 4G wireless routers, there are two SMA-male connectors at the back of the router and the connectors are covered by a long cap. The special design of the Huawei B612 router has an angled backrest for stand stability.

Huawei B618 LTE(https://www.4gltemall.com/huawei-b618-lte-cat11-router.html) is not in a usual router design. It’s in a shape of cube, which looks cool like home furniture. Like Huawei B612, Huawei B618 Cube is also in white color. On the front face, there are indicators for Power, Status, Lan, WiFi, Mode and Signal. The WPS button is in the middle of the indicators. On the back of Huawei B618 WiFi router, there is One USB port, one LAN port, one telephone port and One WAN/LAN port. The power button is above the USB port. And there are also two connectors are for external antennas. The connectors are TS-9, not the common SMA connectors. The SIM card slot is at the bottom of the router.