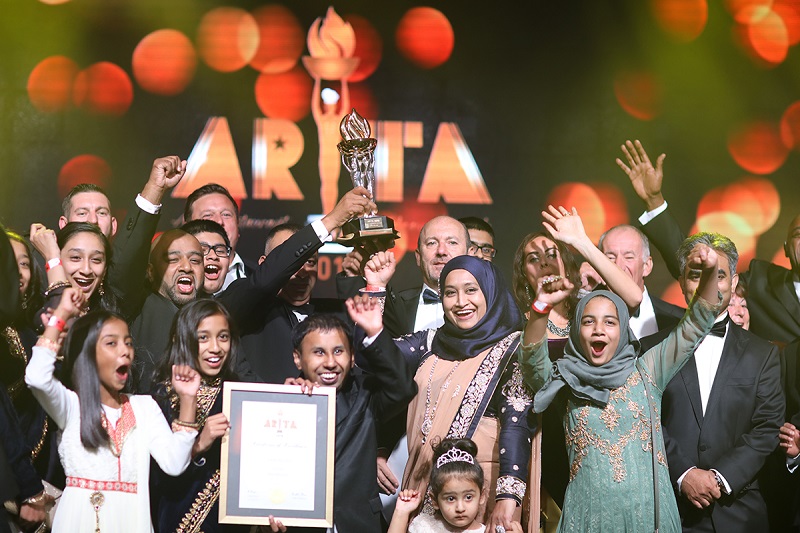 The inaugural Asian Restaurant and Takeaway Awards (ARTA), the most prestigious celebration of South Asian cuisine in the UK, paid homage to the UK’s finest curry houses at the InterContinental London – The O2 on the evening of 30th September 2018.

Interspersing the awards presentation was a curated world-class entertainment, including a performance by the evergreen Queen of Bollywood music, Alka Yagnik. The award Charity Partner, Chance to Shine, was represented on the night by ambassador and former England cricketer, Devon Malcom.

Winners at the Asian Restaurant and Takeaway Awards 2018 were:

A message from Prime Minister, Theresa May conveyed, “These prestigious awards are an excellent opportunity to celebrate the craft of the most talented chefs and highly skilled service staff responsible for producing exceptional British Asian Cuisine. Asian cuisine has certainly become an immensely important and popular part of British life. Its success is owed, in no small part, to the talented restaurateurs and chefs who are being nominated for and receiving awards this year, and it is crucial that we recognise, promote and celebrate this.”

ARTA founder, Mohammed Munim, said at the event, “I began this journey to combine my passion for cuisine, culture, and community. I saw the incredible talent spread across the UK within the Asian restaurant and takeaway industry.”

“It’s important to remember what has been done, but also to respect the next generation. From the very beginning I wanted this to be a moment that was about promoting the immense importance and popularity of the South Asian catering industry. And I wanted it to be a way to connect to the whole community.”

“We kept this mission in the forefront of our mind when we created the nomination and judging process, always making sure to be as transparent as possible. These awards are truly based on the highest of merits and we wanted to ensure that when your future customers see that you have won an award, they’ll know that you’ve achieved one of the highest honours in the industry.”

The Asian catering industry is valued at approximately £5 billion. Even so, over the years the industry has witnessed a steep downturn. This decline is largely attributed to the shortage of skilled workers in the hospitality sector, from a lack of talented chefs all the way through to front of house staff. This is due to the UK’s stringent immigration policy relating to skilled workers from outside the EU, coupled with a palpable sense of disinterest among younger people or job seekers with regard to the hospitality sector. The ARTA initiative has involved addressing this insufficiency. Through reaching out to current and prospective students at the regional cook-offs, ARTA has established a program of youth engagement that will help revitalise the food industry by targeting a demographic that is crucial to the future prosperity of the sector. As ARTA has been working with colleges nationwide, it has introduced the industry and prospective workers to one another, inspiring a symbiotic relationship.

Speaking at Asian Restaurant and Takeaway Awards, Leader of the Liberal Democrats, Sir Vince Cable said, “The purpose of this evening is to celebrate the achievements of a very important industry. This is a four billion pound industry, which employs over a hundred thousand people, and makes a massive contribution to the British economy and to British society. But it’s also about saving the industry, not just celebrating it. I know that in recent years we’ve been losing two restaurants a week – the pressures on the high street, the pressures on the industry are very great, and you’re going to need maximum political support in order to pull through a crisis in the industry.”