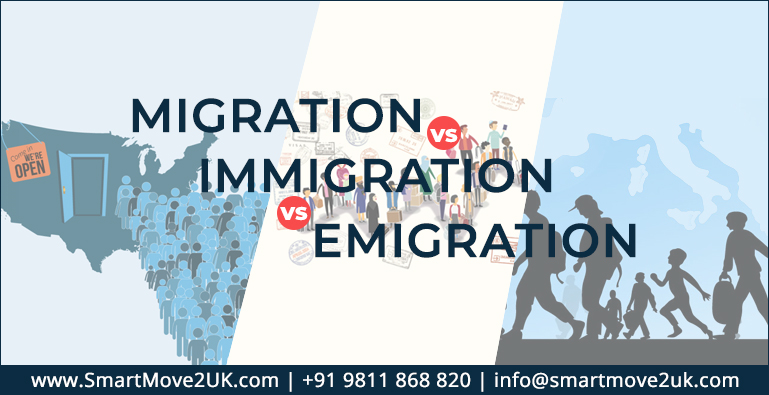 Immigration, Migration and Emigration are three different words that have similar meaning. People often get confused in choosing these words.

What is Immigration?
As per the definition given by the Wikipedia immigration means “Immigration is the international movement of people into a destination country of which they are not natives or where they do not possess citizenship in order to settle or reside there, especially as permanent residents or naturalized citizens, or to take up employment as a migrant worker or temporarily as a foreign worker.”
In simple words Immigrate is an individual or group of people have moved into a new, foreign country.
In simpler term immigration means coming in to a country to live.
Immigrate usually refers to crossing of a political boundary or moving into a new country.
For example, Mr. John immigrated to the UK in the year 2000
What is Migration?
As per the definition given by the Wikipedia migration means “migration is the movement by people from one place to another with the intentions of settling, permanently or temporarily in a new location”.
In simple words Migrate does not require moving into foreign land; it just implies moving.
Migrate refers to just moving to a new region
In simpler term migration is moving into different region or country.
For example, we are ready to travel and migrate within our own country.
What is Emigration?
As per the definition given by the Wikipedia emigration means “Emigration is the act of leaving a resident country or place of residence with the intent to settle elsewhere”.
In simple words Emigrate means to leave one country or region to settle in another.
In simpler term emigration means to leave a country.
Emigration usually refers to leaving a country to live in another.
For example, Mr. Jack emigrated from USA.
If there is anything you need to know about either of the 3 processes, migration vs immigration vs emigration, with respect to the United Kingdom, The Smart Move 2 UK is the stop for you. Being a renowned UK immigration law firm, our associates can guide you through any and all migration procedures for the UK, be it a visit visa or permanent settlement in the UK.