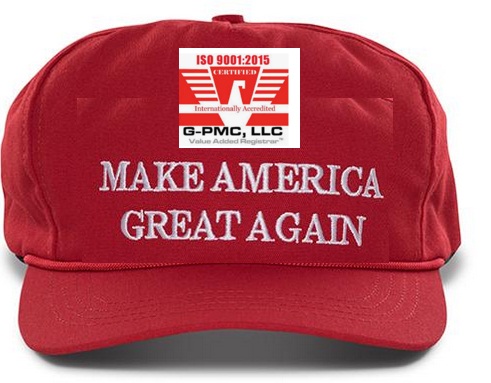 Daryl Guberman and Guberman-PMC have made it clear recently that not only are they both pro-America and pro-Israel, which has always been upfront, but that they also completely endorse and support the #MAGA movement. Guberman turned to YouTube to answer those who have asked why.

New York, NY, USA, December 24, 2018 — A person doesn’t have to be a political genius to realize that the enemies of America operate in many different areas, including the business world. And that this is something to be taken seriously. When it comes to ISO Quality Registrars, Daryl Guberman, CEO of Guberman-PMC has been loudly denouncing how the major international and even based in America, organizations have the most suspect of foreign national ties. Recently, Guberman’s campaign to educate, and when necessary expose, all of the shady alliances in the ISO world, has taken a new turn with him clearly, and strongly, endorsing President Trump’s “Make American Great Again” or as it’s more commonly known, #MAGA movement. Some have wondered why Guberman has taken this position, which inspired him to answer in his latest information-packed YouTube video, “So why Does G-PMC Support the Make America Great Again Movement?” (https://youtu.be/LonxcgOu8RQ)

“We were asked to join both the IAF and ANAB, to make Guberman-PMC part of one of these associations,” remarked Guberman with some intensity. “As a Jewish-American business leader how could I do this when both of these organizations are packed with anti-American and anti-Israel elements, with China, Iran, Pakistan, Saudi Arabia, and even North Korea. That’s like asking me to spit on my beloved American flag. So we thought it was impossible to not be more clear about our position and to show we are #MAGA to the core.”

In the video (https://youtu.be/LonxcgOu8RQ), Guberman goes into great detail about the questionable foreign ties of the IAF and ANAB, showing photos and other evidence that this is not something being imagined, but real. And definitely opposed to the idea of “Making American Great Again”, it is fact the polar opposite. The hope in spreading this information far and wide is that the many business owners who don’t realize who they are supporting choose to instead work with the America-based Guberman-PMC or even the ones that did know, come to their senses, and cut these ties before any potential harm is done to their business, the quality of the work they put our, whatever may be, and certainly their reputation.

As long as supplies last Daryl Guberman is offering a free MAGA baseball cap to anyone who writes him an email or gives a call requesting one, so they too can show open support for the winning idea to “Make America Great Again”. Not only is the hat free, but the generous Guberman is even paying for the postage.

A free phone consultation is also available for any businesses wanting to bring on the American owned and operated company to satisfy their quality needs in an ethical way.

To learn more about Guberman-PMC and what they have to offer be sure to check out http://dguberman.com.