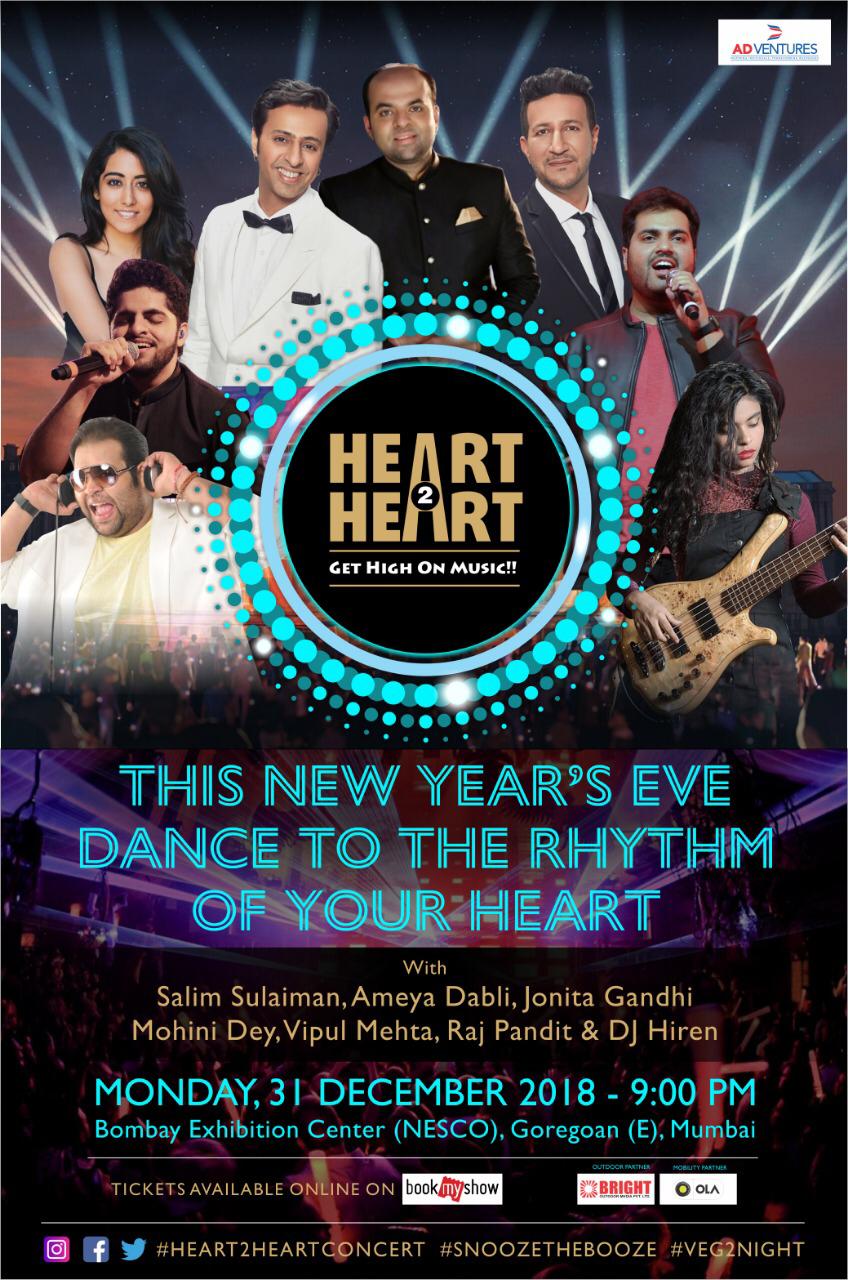 Get high on music, yes, you heard that right! Snooze the booze! This musical extravaganza produced by AD Ventures is truly one a kind and is designed keeping in mind the ask of the families for them to enjoy to the fullest – An exclusively curated New Year Bash for the Chosen Few! Ameya Dabli, Salim and Sulaiman, Jonita Gandhi who will be ushering in the new years with foot tapping music and rocking performance – #Heart2Heart at Bombay Convention & Exhibition Centre (NESCO) Goregaon W, Mumbai on December 31st, 2018.

Today, Salim and Sulaiman Merchant are among India’s most respected composers, having scored more than 100 films including Kurbaan, Rab Ne Bana Di Jodi, Fashion, Band Baaja Baaraat, Aaja Nachle, Heroine, etc. They have been a part of round 20 TV shows and composed several records incorporating cinematic, folk, electronica and Sufi influences to their music. They have composed for musicals such as Merchants of Bollywood and Beyond Bollywood. Their latest, much awaited Hollywood film – Sold, is already gaining a lot of appreciation at various film festivals.

Ameya Dabli is a banker-turned-musician and a complete entertainer who has performed at over 1500 concerts across 15 countries including at USA, UK, Singapore, HK, Germany, Dubai, Mauritius, and others. ”Ekam Satt” – One Truth, One Humanity, World Music” concert is one of these IPs, which is based on the ”Vasudhaiva Kutumbakam: One World Family” theme. Heart2Heart other IPs in the Ghazal/Sufi genre has also been very well received by the audience. The mission for Nation: Performed over 19 Army shows with a standing ovation and currently touring the northeast belt covering other border locations followed by a Mega Event in Delhi in presence of senior Army Officers. He was a special invitee in London for the Indian High Commission and they were so mesmerized with his performance that they sent him a commendation note congratulating us for performing for their guests.

An Indo-Canadian singer who gained popularity through online videos, Jonita Gandhi is a playback singer who has performed in movies across Hindi, Tamil, Bengali, Telugu and Kannada languages. Her most popular covers on YouTube include Someone Like You, Tujhko Jo Paaya, Pani Da Rang, Suhaani Raat, Yeh Honsla and Tum Hi Ho, to name a few. She stepped into the playback singing business with Vishal-Shekhar for the 2013 movie Chennai Express. She then featured in MTV Coke Studio India (Season 3) for the song ‘Pinjra’, before making her debut in Bengali cinema with the song ‘E Mon Aajkal’ from the movie Majnu (2013). She then went on to collaborate with music maestro A.R. Rahman to lend her voice for songs in movies such as Highway, Kochadaiiyaan, and Lekar Hum Deewana Dil. She has also worked on the popular Rahman song ‘Mental Manadhil’ from Mani Ratnam’s movie O Kadhal Kanmani.