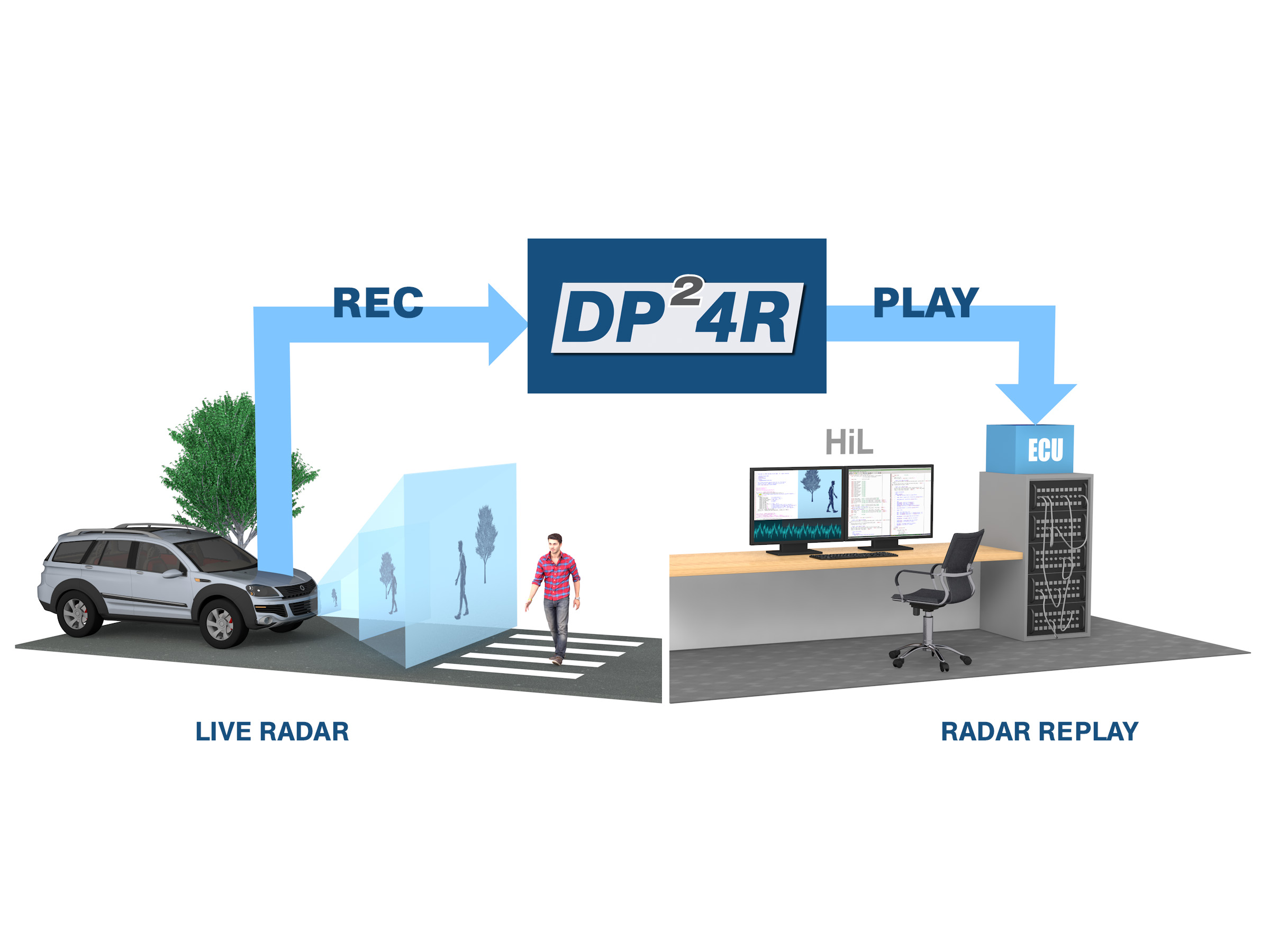 For the development and validation of systems for autonomous vehicle management, real traffic scenarios are usually simulated and tested in the laboratory. Since pre-processing is carried out directly in the sensor front end with modern radar sensors, this can result in a serious gap in coverage during the testing and validation of object detection. In addition, the optimization of algorithms for testing in real traffic is very complex and seldom reliable.

The DP²4R Gigabit Data logger collects raw radar signals between the sensor and preprocessing. The stored signals can then be fed back via the same interface. This allows real traffic situations to be replicated repeatedly in the laboratory and to optimize the processing chain of radar signals. The testing and validation of radar signal processing can be moved from the road to the laboratory. This saves time and allows the reliability of the data processing to be documented.

The special approach of the DP²4R data logger is to read raw data by means of a data head directly coupled to the radar sensor, store it and later feed it back in the laboratory. This requires a high data rate of more than 300Mbit / s per sensor, which is why these data can not be transferred via the system bus.

For practical aspects of data analysis, apart from raw sensor data, other context-specific data like pictures from a camera and GPS position data can be recorded with synchronous precision.

The so-called “head unit” is based on a standardized unit which is specifically tailored to each sensor in order to enable safe and interference-free signal scanning as well as re-injection of the raw data. The sampled information is transmitted together with a time stamp via an internal interface to the central unit.

For data storage, there are several “hot-plugged” SSD drives, which can be used to record data of any length by changing the media during recording. Other arrangements of storage media, such as aggregated RAID systems, can also be easily implemented. The entire hardware has been designed for the environmental conditions within the vehicle.

The system is controlled via Ethernet with a machine-readable xhtml interface or a web browser. The external data transfer is carried out via Gigabit Ethernet or through media change.

The concept has been designed for future extension with additional sensors with a larger number of antennas and higher radar frequency.

> DP²4R Head-Unit Hardware, specifically adapted to the respective radar sensor
> Flexibly customizable for almost any type of processor
> DP²4R Controller hardware and OS based on standard components
> 1 to 4 head units can be recorded at the same time
> 320 Mbit/s recording rate per head unit
> Data recording without interference with the radar function
> Camera and GPS data, and more. Can be recorded synchronously
> 2TB storage capacity (> 2 hours), expandable by removable drives
> 9-32 V power supply
> Resistant to environmental conditions in the vehicle
> Controller based on Linux with hmtl/xhtml interface