OBX (ISBN: 979-8-218-00862-8) is set in the popular beach destination of North Carolina’s Outer Banks and introduces readers to NC State Bureau of Investigation Agent Michael Francis as she investigates the murder of an influential politician’s staffer, right in the middle of a campaign. The struggling mother of three finds herself in a gathering storm of cover-ups, crooked cops, drug trafficking, and attempts on her life while she deals with a difficult separation from her police detective husband. In the midst of unexpected and confusing romantic overtures from a prime suspect, an approaching hurricane threatens to sabotage her investigation as Michael chases down a serial killer who’s been operating in the shadows for years, facing human threats more dangerous than mother nature herself in a climactic ending with an unexpected twist.

This is the first in a series of books featuring Michael Francis, one of author David Dean’s strong characters attracted to strong characters who discover their true, authentic selves when faced with unforeseen challenges.

An avid fan of suspenseful mysteries, science fiction, and horror, David Dean enjoys writing novels, novellas, and short story anthologies that challenge a reader’s perceived understanding of social norms, reality, science, and religion, and the role each plays in the ongoing struggle between good and evil in every human being.

The author lives in the coastal paradise surrounding Topsail Island, North Carolina. His other titles include the sci-fi anthology The Peril of Thought and the horror novel Shadows. He is available for book signings, panel discussions and other public events.

NERC 2022 will be a global benchmark for fulfilling research & development priorities of India and the world: Shri Dharmendra Pradhan

Union Education and Skill Development Minister Shri Dharmendra Pradhan inaugurated the North East Research Conclave(NERC) 2022 at IIT, Guwahati today. Shri Pradhan in his address said that this conclave will  strengthen the linkages between industry, academia & policy makers and further invigorate the research, start-up and entrepreneurship ecosystems in the resource-rich Northeastern Region states and the country. 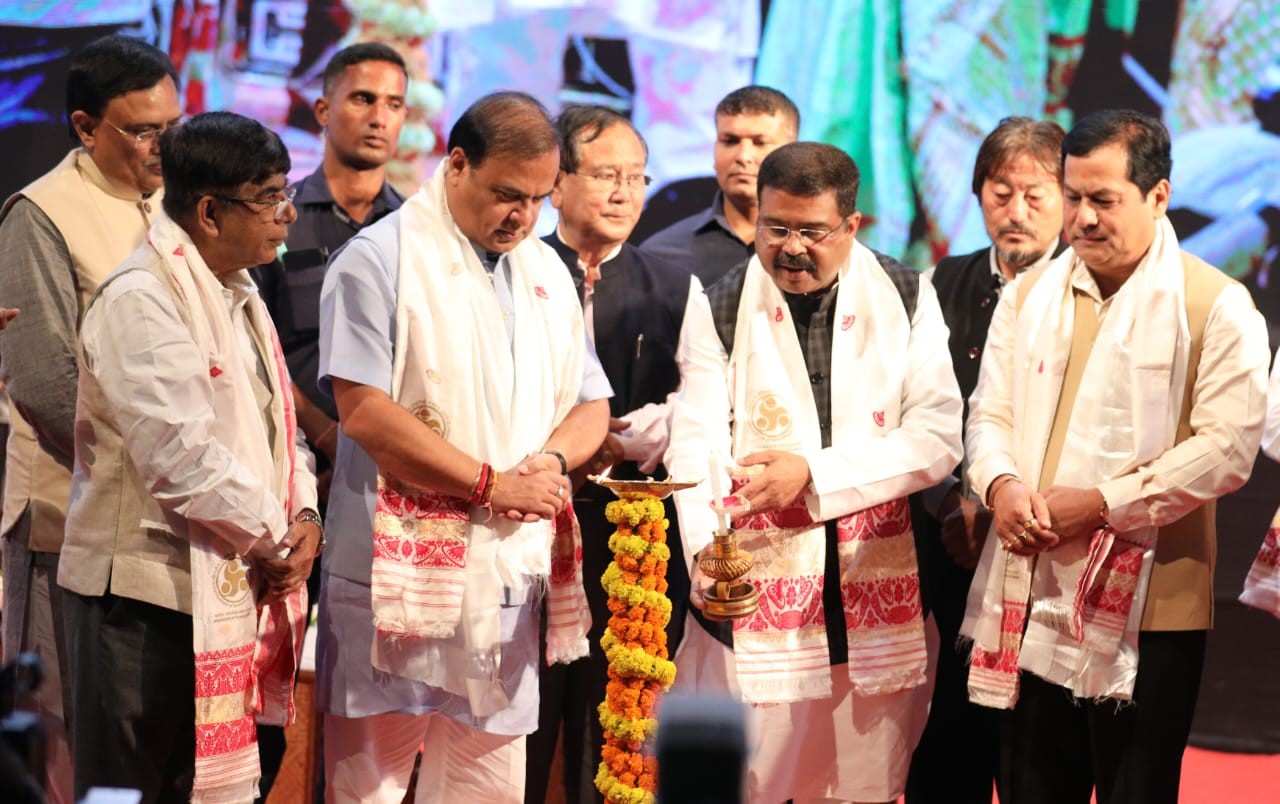 Talking about the importance of research the Education Minister said that the objective of research should be to find solutions to chronic problems of the country and to encourage all people to come together, work together and produce together for the welfare of the most vulnerable. NERC 2022 will be a global benchmark for fulfilling research & development priorities of India and the world, he added. Shri Pradhan  appealed to the youngsters and students to ‘walk on the path of duties and responsibilities’ to take the country to new heights.

The Union Minister further informed that to strengthen the research ecosystem, encourage innovation at grass-roots and lead India to self-reliance the government is in the process of setting up National Research Foundation with a proposed outlay of Rs 50,000 crore in line with the recommendations of NEP 2020. He also said that North Eastern region has immense potential to promote Research and Innovation.

Chief Minister of Assam Dr. Himanta Biswa Sarma in his deliberation said that Research and Development is very crucial for a fast developing nation like India. In a progressive society research and development has always been considered as the fundamental building block as it plays critical role in the process of innovation and expanding our knowledge and understanding, he added.

Minister of State for Education Shri Rajkumar Ranjan Singh in his address said that North-East Research Conclave is the platform for the entrepreneurs and research institutions to showcase their innovations. He said that this is a very useful initiative for North East which brings policy makers, industrialists and researchers to same platform. This mega event will have great impact on the educational sector of this region, he added

Addressing the NERC Conclave, Minister of State for Education Dr Subhas Sarkar said that Government is working for advancement of education sector in every part of the country.

Union Shipping Minister Shri Sarbananda Sonowal in his address said that North East Research Conclave will help the young generation to fulfill their dreams in near future.

On this occasion an MoU ‘Assam Advanced Health Innovation Institute(AAHI)’ was also signed between Government of Assam and IIT, Guwahati.

The North East Research Conclave 2022 is being organised to showcase the best Research & Developmental activities from all the educational and the research institutions across the states of North East India. It will also seek to create a common interface for interaction of academia and industry in North East India. The conclave will also work towards creating an environment, conducive to the development of local indigenous technologies and innovations, creating the scope and laying the foundation for entrepreneurship and to agglomerate a vast talent pool, for the promotion of Translational Research.

“The societal and behavioral changes we are experiencing around our relationships with pets have contributed greatly to an unprecedented period of growth for our industry,” said Kristen Lynch, Executive Director of NAPHIA. “A record number of household pet adoptions and purchases during the pandemic, combined with continued work-from-home arrangements, and pet owners’ desire to mitigate unexpected veterinary costs have contributed to even higher growth rates in the past several years.”

Rick Faucher, President of NAPHIA’s Board of Directors, noted that with approximately 4.4 million pets currently insured, and a total potential market of about 175 million North American pets, there is still considerable room for continued industry growth.

“2021 marked the seventh consecutive year where the pet insurance industry experienced double-digit growth,” said Faucher. “While pet insurance penetration rates have increased to approximately 2.48% in the U.S. and 3.10% in Canada, we recognize that as an industry we’ve still only captured a small portion of the potential market and we’re excited by the potential for sustained, long-term growth.”

* As reported by NAPHIA

About the NAPHIA State of the Industry Report
Since 2010, NAPHIA’s State of the Industry Report has been published using data compiled, aggregated and validated by the global multinational risk management and advisory firm Willis Towers Watson. NAPHIA members and report participants represent approximately 99% of all pet health insurance coverage in effect in North America.

About NAPHIA
The North American Pet Health Insurance Association (NAPHIA) is comprised of reputable pet health insurance organizations from across the United States and Canada. As a coalition, NAPHIA works to advance and grow the pet insurance industry and marketplace through proactive research, data sharing, benchmarking initiatives, advocacy efforts, strategic partnerships, resource-sharing and the dissemination of information to collaboratively address challenges and opportunities.

“We are pleased and honored to receive this recognition from ADP,” said Points North CEO Keith Pelatowski. “Our collaboration has proven beneficial to our company and ADP, and most importantly, to our mutual clients who rely on our shared solution to produce certified payroll reports for government agencies in a timely and accurate manner.”

As a solution specific to the construction industry, Certified Payroll Reporting® saves clients time and money in the generation of government mandated, pay period-based reports detailing the payment of the compliant prevailing wage rate for each employee working on a public works project, as compared to preparing the reports manually. Clients have confidence knowing that the data is stored indefinitely on Points North’s cloud-based platform and can be generated with the current certified report format at any time. Learn more about Certified Payroll Reporting® at the ADP Marketplace listing, Points North Certified Payroll Reporting for ADP Workforce Now® | ADP Marketplace.

The collaborative efforts of the ADP and Points North Product Development teams have delivered API integrations that provide a consistent and easy to navigate experience across all Points North franchises and ADP business segments. Through this teamwork, they provide an experience for their clients that feels like working with a single company, rather than two.

About Points North:
Established in 1994, Points North is a software company offering solutions for ACA and Certified Payroll Compliance, salary allocation, payroll and retirement plan data aggregation, and attendance tracking and reporting. Through our partnerships, software, and customer support we create an experience that is seamless and predictable.

Rice is one of the most cultivated grain crops in India; it is also the staple diet of a major part of the North East. The traditional hand method of cultivation and harvesting is still practiced. They range from low-lying lake areas to sloppy land of high hills in different rice growing seasons by adopting their age-old indigenous rice growing methods and practices for their food and livelihood. Smt. Arjun Pudi Chakma, D/o of Shri Chitra Bahu Chakma, Ujebong NaRMG, Village Jyotsnapur II, Diyun, Arunachal Pradesh. Due to family issues became homeless. The economic status of the family was inseparable. Without any hope for a better life, her life was in jeopardy. After one month, her relatives helped her build a small house. Being a single mother and the sole breadwinner, she has endured a lot of hardship to support her family. She started working as a daily wage, earning a meagre amount of Rs 100/- or Rs 150/-only per day. With such an acute amount of money, she was unable to take care of her family’s basic needs.

When NERCRMS came to light in the village in the year 2018, all the NaRMG members from Ujebong NaRMG agreed to support her with a rice mill (small scale) under NERCRMS activity at a cost of Rs. 38000/-.

Her monthly income from the rice mill is Rs 6,000/-per month. She supports her two daughters for their schooling and family livelihood. She now has a decent standard of living and is continuously looking for ways to expand her business.