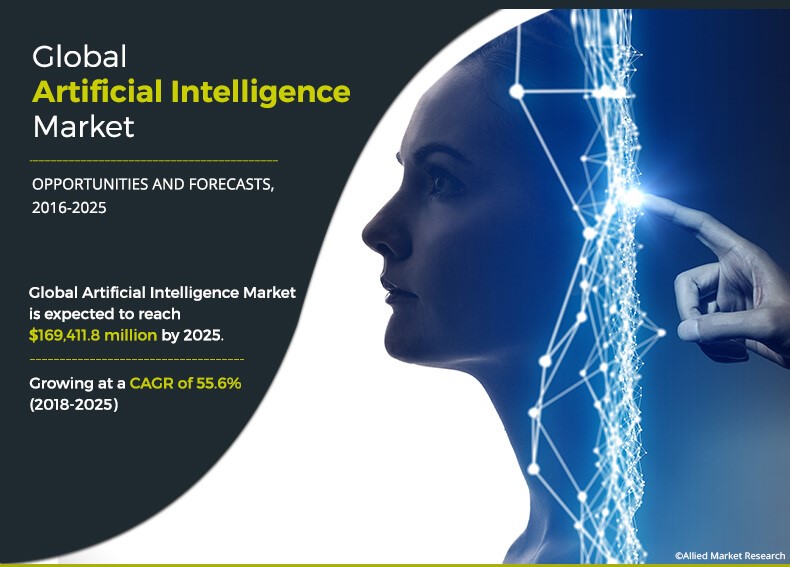 “The North American market is the most productive as compared to others with diverse industry verticals implementing artificial intelligence to a greater extent. Moreover, various new startups are investing in AI technologies, as demand for cloud applications is increasing to analyze large amount of data. Further, it is projected to generate the highest market revenue over the forecast period with predominant deployments in the IT & telecom and BFSI industries.”

According to a new report published by Allied Market Research, titled, Artificial Intelligence Market by Technology and Industry Verticals: Global Opportunity Analysis and Industry Forecast, 2018-2025, the artificial intelligence market accounted for $4,065.0 million in 2016, and is expected to reach $169,411.8 million by 2025, growing at a CAGR of 55.6% from 2018 to 2025. In 2016, North America dominated the global market, in terms of revenue, accounting for about 49.0% share of the global market, followed by Europe.

AI is associated to human intelligence with similar characteristics such as language understanding, reasoning, learning, problem solving, and other. Manufacturers in the market witness enormous underlying intellectual challenges in the development and revision of such a technology. The market for artificial intelligence is primarily driven by the improved productivity, diversified application areas, increased customer satisfaction, and big data integration. However, lack of skilled workforce and threat to human dignity & other threats are some of the restraints of the market. Nonetheless, the impact of these factors is expected to be minimal due to the introduction of new technologies in the market.

The machine learning segment secured the highest share of about 52.0% in the artificial intelligence market in 2016 and is expected to grow at a CAGR of 56.4% during the forecast period. In terms of industry vertical, IT & telecom sector is expected to contribute the highest market share in the coming years, as various new startups are investing in artificial intelligence solutions. Moreover, the rapid urbanization, technological advancement, and increase in demand for cloud applications has fueled the demand for AI technologies in developing economies.

For purchase enquiry at: https://www.alliedmarketresearch.com/purchase-enquiry/1773?utm_source=AS_free

North America is one of the fastest growing region in the Artificial Intelligence market. It is expected to witness higher growth rate during the forecast period, owing to presence of the key artificial intelligence companies in the region.