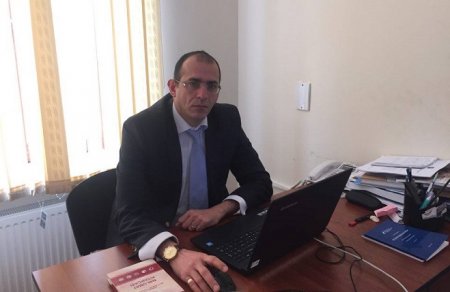 The member of parliament Elkhan Suleymanov put the problem of Nakhchivan which has been in the blockade after the collapsing of the USSR, on the agenda in his speech at the meeting of Monitoring Committee of the European Council Parliament Assembly by saying these statements:

“This dreadful Nakhchivan blockade must be abolished. Despite this no one wants to hear about it. ”Nakhchivan is one of the Near East. It is more than 3500 years old.

Nakhchivan has also struggled against Armenians for ages in the history. Below the Nakhchivan river, as well as in the town in the origin of the Chahri river on 12 May 1905, above the Nakcchivan river on 12-18 May 1905, in the origin of Alinja river, in the village of Shurut and on the river Gilan on 12-18 May 1905 massacres were committed against Nakhchivanians by Armenians. 48 villages were completely burnt in Zengibasar, 18 girls and young women were taken prisoners, over 400 children, 150 old men and women were killed, 100 ill people were burnt, 816 refugees were drowned in the Araz river, 160000 people moved to Southern Azerbaijan and remained homeless there; in Vedibasar 118 villages were burnt, 900 people were killed with submachine guns, 6 women were taken prisoners, over 300 children and old men were killed. In Dereleyez 74, in Sherur and Shahtakhti 76 villages were burnt. In Sherur 810 ill people were killed in bed, 144 women were taken prisoners, 35 children, 14 old men, 8 women and 9 ill people were killed. At the time of the USSR the Armenians used all the methods to join Nakhchivan to Armenia. According to the plan of the former secretary of the Armenian Communist Central Committee A. Khanjyan, from all over the world all Armenians were to move to that area, Nakhchivan was to be joined to Armenia, all the Azerbaijanis were to move from Armenia to Azerbaijan. Recently I heard that Armenian government claimed to join Nakhchivan to Armenia, but Azerbaijan government rejected the claim.”

Nakhchivan Autonomous Republic is located on the border with Iran, it has 410 000 population and has been in the blockade condition by Armenia for nearly 25 years. Historians have different opinions about the blockade of Nakhchivan. Some consider 1986, 1987, some of them think 1990, 1991, 1992 and so on.

Generally blockade is of 2 kinds: political and economic. Nakhchivan was economically blocked in 1990s, politically in 1986.

Azerbaijan and its inalienable part-Nakhchivan Autonomous Republic (NAR) have struggled for independence for a long time. In 1990 the Supreme Soviet of NAR accepted a conclusion about the separating from the USSR, taking “Moscow and Gars agreements as basics. As a matter of fact, it was the beginning of Russia’s destruction. The political processes, the events around Nagorno Karabakh after 1990 influenced Nakhchivan, too.

The situation was harder there at that time. The danger of Armenian invasion was waiting for Nakhchivan. The village Kerki which was included into Sadarak region of NAR and became anclav after a part of Nakhchivan was given to Armenia, was invaded at the increasing time of the separatist conflict in Karabakh.

Whereas, at that time Armenians attacked not only Nagorno Karabakh villages in which Azerbaijanis lived, but also all the villages on the border of Azerbaijan with Armenia.

In 1990 in the night of January 19 to 20 Armenian armed forces attacked Kerki village of Sadarak and invaded it. The units of the 7th Soviet Army dislocated in Armenia helped them with the invasion. All the villages on the border with Armenia including Sadarak had to face those armed attacks 14 times, terrible battles, all the Autonomous Republic’s blockade and hundreds of martyrs, the local people didn’t leave the city, fought to the end.

Kerki village of Sadarak is the only village that has been conquered by Armenians. There is a tomb of a Turkish soldier who became martyr in the battles, in the martyr’s avenue of the village.At present Armenians are still putting territorial claims against Nakhchivan. Armenian Head Prosecutor states that official Armenia had an eye on this ancient Turk land which is in the blockade.

Speaking in the forum on regarding to 100th anniversary of fictional Armenian massacre, the prosecutor didn’t conceal the new land claim:
“Armenia has a territory problem both with Turkey and Azerbaijan (Nakhchivan region). To solve it legally Armenia has written a complain application form and has to present to UNO and the International Court.The prosecutor Avgan Ovsepyan has claimed that Turkey has to return the Armenians’ lost lands and territories, as well as Armenian church.

Armenia dealing with constant research didn’t stop this time, too and made a statement with provocation character titled “Nakhchivan has been one of the main formed lands of Armenian by force in 1921. But we are sure that this occupied territory will soon be under the control of its historical owner.”

The newspaper “Russkaya jizn” published in San-Francisco in the USA in 1987 on November 10 printed the article titled “The main point of the movement for Nakhchivan by the USA Armenians E. Kokosyan and L. Dunamalyan.

Elkhan Suleymanov rightly states that during 25 years none of the international formations, as well as ECPA have had any discussion, listening or accepted any document about Nakhchivan blockade:

“Let’s first abolish this dreadful blockade. But no one wants to hear about it. If European Council wants to accelerate the development of democracy in Azerbaijan, it must say the lost word for putting an end to the invasion first of all”.

Armenian officials must have been aware that “to start the problem from Nakhchivan” openly will be valued as a military aggression by the world public. On the other hand, they knew exactly that there was no social base to support the invasion plans of Armenia in Nakhchivan. What’s more Nakhchivan people’s eternal bravery and courage wasn’t forgotten in Armenia. They remembered that, for instance, in May 1905 when Armenians started terror in Nakhchivan, Azerbaijanis punished them very well. In the Azeri-Armenian peace assembly held in Tiflis in February 1906 according to Khatisov (Armenia’s future minister) at that time in Nakhchivan “45 Armenians and 1 Moslem” had died. We haven’t researched the reality of these number. However the fact remains as a fact. As M.S.Ordubadi wrote in 1911: “In May 1905 Armenians were completely defeated in Nakhchivan, crossing a black line on the pages of their national history.”