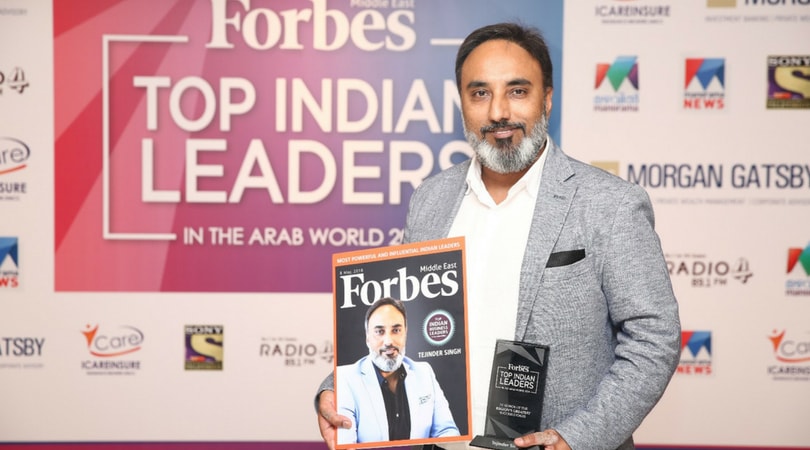 May 8, 2018: Dr. Tejinder Singh, CEO & Founder of Q-Tickets, featured among the Top Indian leaders in the Arab world 2018 during the recent Forbes Middle East event held at Five Palm Jumeirah, Dubai.
The event witnessed most influential Indian business tycoons who have achieved phenomenal business success in the Arab region.

According to latest report ‘Forbes’ World’s Billionaire Indians 2018’, Billionaires of Indian origin, based in the Gulf, have a collective net worth of US $26.4 billion (Dh96.88 billion). They have played a vital role in the growing economy of UAE and other GCC countries. These ranked businessmen are now investing largely in both the Arab region as well as in India.

Navdeep Singh Suri, Ambassador of India to the UAE, said: “The Indian community across the UAE holds key positions in every walk of life. The work Indian leaders are doing in the region displays the finest aspects of India and we are privileged to have these leaders being ambassadors to the UAE and bridging the gap between the two countries.

Speaking to Qatarday, Dr. Tejinder Singh said, “I am honored to receive Forbes’ award 5th consecutive time, which could not have been possible without the support of my team at Q-Tickets. I thank Forbes Middle East for honoring me with this award. UAE provides excellent infrastructure, higher return on investment, and its safe haven for businessmen, that’s why our operations are based here.”

Impressed by his passion and contribution towards the advancement of the Arab region, he was also honored as the ‘Person of the year 2017-18’ by the reputed Asia One Magazine this year.
Dr. Tejinder Singh currently runs BPO+, the largest & most recognized BPO firm in the Middle East, Q-Tickets, & AtPik, a leading e-commerce platform in the Middle East region.

Dr. Tejinder can be contacted by Email, LinkedIn & Twitter