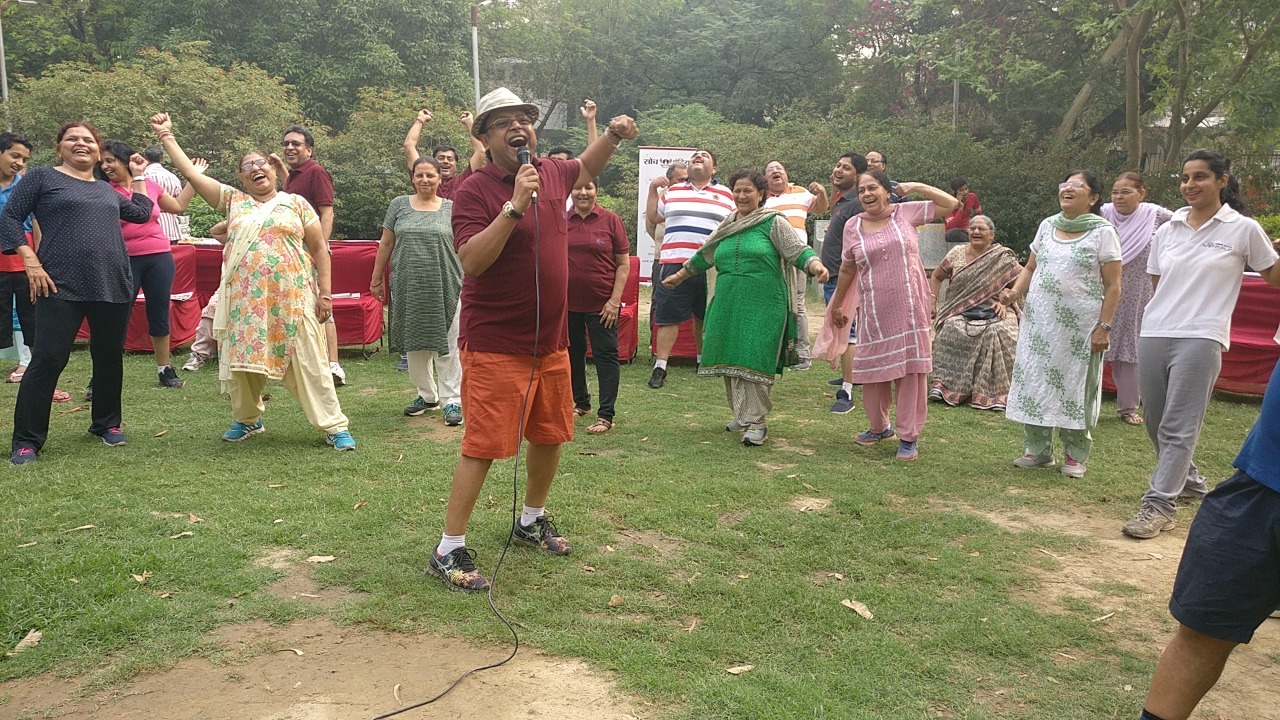 Sunday, May 06, 2018 at Punjabi Bagh, New Delhi – Laughter is a cheerful and powerful emotion which helps individuals to change themselves and to change the world in a positive way. Laughter is a complete and unique language which has the capability to unite mankind. On the occasion of world laughter day, AIPL launched their Laughter yoga club with the purpose of spreading awareness and methodology to employees, customers, family, friends and everyone around together. AIPL employees along with members of Punjabi Bagh Friends Group (PFG) gathered in Veer Savarkar Park at morning hours for the event.

The event, organized by PFG, had over 200 participants and began with a laughter awareness session followed by laughter yoga exercises. A laughter video, the first in its series was launched. The video series containing laughter yoga routines and benefits will be distributed on social media and digital space to target the youth of the nation.

The event concluded with a garden cleanliness drive inspired by ‘Swacch Bharat Abhiyaan’, where the participants cleaned the park and surrounding area.

Mr.Ajit Gupta, CEO, AIPL ABRO said, we all get too busy in our lives and let happiness take a backseat. Stress is on the rise and its harsh effects like depression and disease have crept up to every age group. Even children have not been spared and that is a cause of serious concern. This makes laughter yoga even more important in today’s context as it is a wonderful stress buster with fun activities for all age groups. It teaches one how to laugh, even when one does not feels like, thus enabling everyone to approach any difficulty more positively. Adoption of Laughter yoga along with Phenk mat is a manifestation of our endeavors to bring ‘Total Societal Impact’ by promoting cleanliness and happiness together.

Started by Dr. Madan Kataria, Laughter Yoga is a complete well-being workout routine being actively practiced across 100 countries. It relies on the fact that body cannot differentiate between fake and real laughter. This approach allows the practitioners to gain health benefits without relying on humor.

AIPL Marketing Pvt. Ltd, popularly recognized as AIPL ABRO is a key player in the adhesive tape market. With over 30 years of experience, AIPL ABRO enjoys a vast reputation with the ABRO masking tape being synonymous with masking tapes among carpenters.
AIPL had recently announced multiple campaigns to bring Total Societal Impact around them. Laughter yoga along with ‘Phenk Mat – Gaadi Se Sadak Par’ are two major campaigns that strive to make people healthier and roads cleaner. These campaigns are completely adopted by their organization as integral internal practices and they are taking the same throughout the nation.