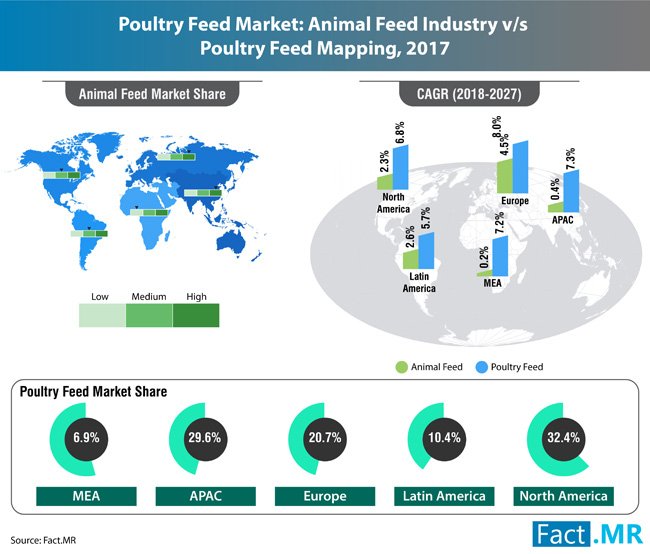 Shift towards high protein diet and increasing preference for poultry meat continues to influence the growth of the poultry feed market worldwide. Rising exports of poultry, particularly from the European Union and the United States, have remained instrumental in driving the need for enhanced poultry production, in turn fuelling sales of the poultry feed. Fact.MR envisages that the demand for poultry feed is projected to expand at a CAGR of 7.1% in terms of volume during the period of forecast, 2018-2027. The Poultry Feed Market report also reveals that the sales volume of poultry feed are likely to cross 890,000,000 tons by the end of the assessment year.

Poultry feed producers have been focusing on carrying out developments in their products and processing methods in a bid to cater to the growing needs of consumers as well as abide by laws laid by regulatory authorities regarding GHG (Green House Gas) emissions. This has also triggered the use of clean labels as a measure to assure safety of poultry products by communicating ingredient information to the consumer. In addition, being largely driven by industry-specific aspects, manufacturers of poultry feed can expect momentous growth in the forthcoming years, says the report.

Corn as a source for poultry feed has gained significant traction since the past couple of years. Poultry feed derived from corn provides high nutrition and palatability along with high protein and low fat content. Corn poultry feed can replace other sources such as soybean by offering cost superior reductions during production. Sales of poultry feed from corn source are estimated to cross US$ 123 Bn by end of the assessment period, making it a lucrative investment area for stakeholders in the poultry feed market.

Sales of poultry feed in from of briquettes are likely to account for a major share in the entire poultry feed market. However, the demand for poultry feed pellets are projected to witness a relatively higher growth with respect to adoption owing to the enhanced FCR (Feed Conversion Ratio), feed intake and weight gain.

Demand for poultry feed continues to remain concentrated in the emerging economies of Asia Pacific. Countries such as China and India have been showcasing increasing preference for broiler meat since the past few years. This has resulted in the increasing dependence of quality poultry feed to cater to the growing poultry production. On the other hand, sales of poultry feed in the United States is likely to account for a lion’s share in the poultry feed market, making North America an attractive region for stakeholders from an investment standpoint. Overall, stakeholders in the poultry feed market can expect an opportunistic scenario driven by a combination of industry specific and macroeconomic factors during the assessment period.