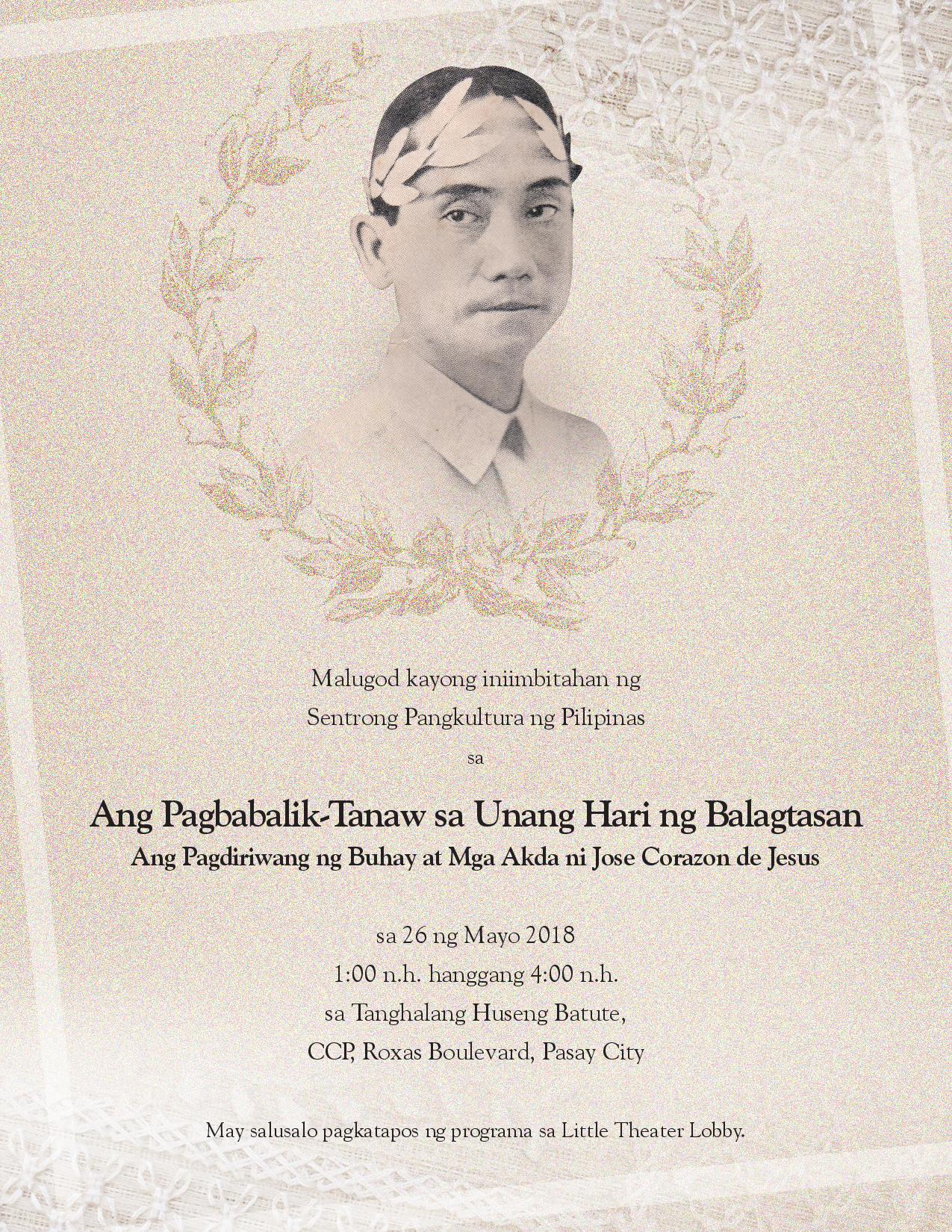 The Cultural Center of the Philippines (CCP) announced today the production of “Pagbabalik-Tanaw sa Unang Hari ng Balagtasan” to celebrate the 86th death anniversary of Jose Corazon De Jesus on May 26, 2018 at the Huseng Batute Theater starting at 1:30 p.m. The theater, a black box intended for experimental performances, was named after the Filipino poet’s pen name Huseng Batute. The event is free and open to the public.

Batute, born on November 22, 1894 in Sta. Cruz, Manila to Dr. Vicente De Jesus and Susana Pangilinan, wrote his Buhay Maynila column in verse at the Taliba newspaper for 10 years. His poems were published in six (6) books, namely, Mga Dahong Ginto, Gloria, Mga Itinapon ng Kapalaran, Sa Dakong Silangan, Ilaw sa Kapitbahay, and Maruming Basahan. He also penned lyrics for songs, most of which are Kundiman or the traditional Filipino love songs. He translated the song “Nuestra Patria” to “Bayan Ko” considered as the second (unofficial) national anthem of the country.

Aside from writing poetry and lyrics, Batute likewise excelled in performing in the Balagtasan. The Balagtasan, named after Francisco Balagtas who wrote Florante at Laura and Orosman at Zafira, is a Filipino literary form of debate where rhymed verses are created in spontaneity under topics that range from Philippine politics to culture. Batute received numerous recognitions for the Balagtasan. He won the title Hari ng Balagtasan in 1926 and again in 1929 where he beat his closest contender, Florentino Collantes.

“The Center is honoring Jose Corazon de Jesus or Huseng Batute through this event because his works exemplify artistic excellence, cultural values, Filipino aesthetics and our national identity. These are embodied in our performance pledge to attain a humanistic global society,” said Arsenio J. Lizaso, president and board member of the CCP. “In this digital age, we would like to introduce the millennials to traditional poetry, the Balagtasan, and the Kundiman music which are the precursors of Spoken Word, the rap battles, and the modern Filipino love songs,” Lizaso added.

“Pagbabalik-Tanaw sa Unang Hari ng Balagtasan,” done in cooperation with the Provincial Government of Bulacan, has two segments: (1) Forum where invited speakers would discuss the works of Batute and their relevance to the current period; and (2) Pagtatanghal where ten of Batute’s works would be performed. Bulacan Governor Wilhelmino Sy-Alvarado and Dr. Benilda Santos are two of the speakers in the Forum.

The works of Batute to be performed consist of five poems including sections from the first-ever Balagtasan held at the Instituto de Mujeres in Tondo, Manila on April 6, 1924 and five songs which he provided lyrics to. The Philippine Opera Company (POC); rappers Beware and Negatibo; actors John Arcilla, Ronnie Lazaro, Lou Veloso and Anthony P. Falcon; ventriloquist Ony Carcamo; traditional mambabalagtas from Bulacan Jerryco Tanig and Melandro Pascual; Karl Santos, Lester Abueg and Karl Orit of The Makatas, and Lolito Go, Jr. are among the performers in the Pagtatanghal segment.

Multi-awarded writer and performance artist Vim Nadera and Louise O. Lopez are the hosts of the event.

The event is spearheaded by the CCP Office of the President and implemented through the Center’s Intertextual Division. For more details on the “Pagbabalik-Tanaw sa Unang Hari ng Balagtasan” event, please contact Kimberly Lim at 551-5959, (0919) 317-5708, or ccpintertextualdivision@gmail.com.