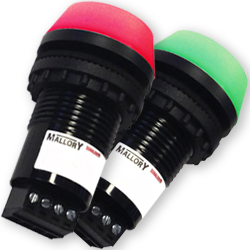 NORTHVALE, NEW JERSEY, USA – The current market availability of 22mm light/sound alarms is full of models in which LED and sound are internally tied together. Meaning, if the sound is continuous, the light is continuously on. If the sound pulses, the light only pulses at the same time as the sound. This is also true of the new multi-tone models.

Now, however, the new Mallory Sonalert 22mm Independently Controlled LED Light and Sound Alarm models give users the control to select options from this 2-in-1 device. This new allows a single physical unit to produce a sound alarm, a light indication or both. The independently controlled 22mm alarms and LED light devices also have four terminals like the multi-tone models. But on these two-in-one devices, two of the terminals are dedicated to the sound portion and two are dedicated to the LED portion.

This gives the user total control of when the sound and/or LED light are activated. And, Mallory Sonalert is offering three new Independently Controlled Light and Sound Models:

In a small 22mm panel package, users benefit from an audible alarm and light alarm where both are independently controlled. This saves the user panel space and overall cost since only one device needs to be installed on the machine instead of separate audible panel and LED panel device. The independently controlled light and sound units can truly replace the panel alarm and panel LED with one single unit since both are controlled independently. This saves space, installation costs and over-all piece part cost.