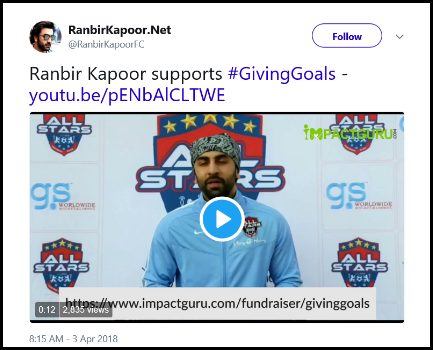 36 lucky donors will have the chance to meet their favourite
Bollywood star!

Magic Bus is also offering an opportunity to all the fans of Bollywood stars from the All-Star Football Club (AFSC) to join their favorite stars in raising funds for Magic Bus by visiting www.impactguru.com/givinggoals. 36 lucky donors will be selected and get a chance to meet one of their favorite prominent Bollywood celebrities from the ASFC.

Speaking on the association, Jayant Rastogi(CEO), Magic Bus India Foundation said, “I am overwhelmed by the support pouring in from some of the well-known celebrities of Indian cinema. Magic Bus Foundation, has been fighting against poverty by ensuring children and young adults have a holistic education. Through this association, we hope to continue developing the skills today’s children require for a secure, stable and bright career’

On associating with Magic Bus, ImpactGuru.com’s CEO & Co- founder, Piyush Jain, said, “ImpactGuru.com is glad to partner with Magic Bus to change the future of thousands of underprivileged children through crowdfunding. This is, perhaps the first time in India, when so many celebrities are coming together to mobilize their fans from around the world to raise funds for a cause as well as give them a chance to meet their favourite star! We look forward to help achieve #GivingGoals and help change the future of our country through crowdfunding for this cause.”

Some of our stars also showed their support. Abhishek Bachchan who has been associated with Magic Bus for a long time and is a regular face at the Annual Magic Bus Galas said, “I have met some of the children at the Magic Bus centers and know what a massive change the organisation has made in their lives. I am thrilled to be a part of #GivingGoals. Let’s change the future of our country by empowering our youth. Your contribution counts”

Arjun Kapoor also urged his fans to donate and said “I am excited for the match, but I’m more thrilled to reach the goal of this fundraiser and then witness the change it brings to the lives of thousands. I will make my contribution and I hope fans from across the world will join me in achieving #GivingGoals.”