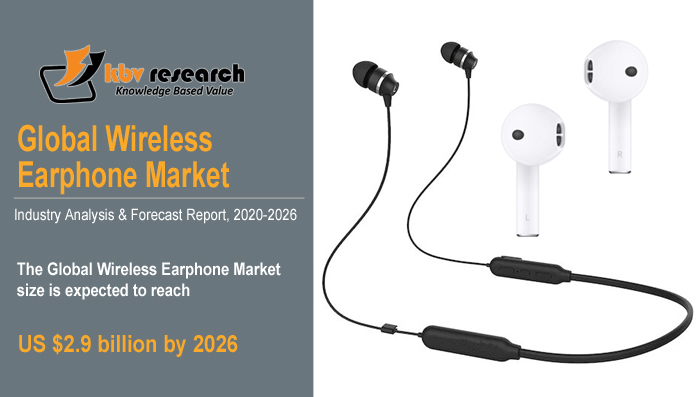 According to a new report Global Wireless Earphone Market, published by KBV research, The Global Wireless Earphone Market size is expected to reach $2.9 billion by 2026, rising at a market growth of 8% CAGR during the forecast period. The demand for wireless earphones is expected to see substantial growth over the projected period due to technological advancements such as Bluetooth and W-Fi. A variety of start-ups and well-established firms, such as Samsung Electronics, Bose Corporation, and Sony Corporation, are focused on the production of new products. It is also expected to fuel the market for wireless earphones.

In terms of revenue, music, and entertainment, the demand for wireless earphones dominated. That is attributed to the universal availability of Wi-Fi that enables users to listen to music or view videos indoors and outdoors. Virtual reality is expected to showcase the fastest growth in the forecast period. The growing need to enhance VR content is pushing the need for wireless earphones.

In terms of revenue, the demand for wireless earphones dominated offline distribution channels. It is due to the ability of offline stores to provide a detailed analysis of the technologies embedded in the product in order to have the same realistic experience. Online channels are expected to record the fastest growth over the forecast period due to the rising population and the increasing proliferation of smartphones. Technologically advanced nations such as the United States and the United Kingdom play a prominent role in the growth of the market.

North America led the market for wireless earphones. It is due to the region’s highest Internet penetration rate worldwide. High market visibility of wireless Bluetooth speakers and smart home devices is expected to be a major development in the U.S. and Canada. In addition, preference for Wi-Fi and AI-enabled Bluetooth speakers plays a key role in regional market growth. Asia Pacific is predicted to have the fastest growth over the projected period. Shifting preference for technology-led luxury goods in developing countries, such as India and China, is fueling the regional market growth. Increasing sales of mobile devices, such as smartphones, tablets, and phablets, in the area, are also expected to result in increased demand for on-the-go audio, which, in effect, would enable the use of wireless earphones.