SIFTMedia 215 Collective is presenting its first survey of film professionals in the Philadelphia and Mid Atlantic Region funded by the Philadelphia Assembly and the Independence Public Media Foundation.

This Analysis Survey Project aimed to examine the landscape of navigating the business, art and challenges of film & mediamaking, affecting Women of Color (WOC). The survey looks specifically at the experiences of black and brown women and gender fluid filmmakers in Philadelphia and the surrounding area; including those who may currently reside in other parts of the country but had original roots in Philadelphia.

Filmmaker and Producer, Eboni Zamani was hired as the Survey Architect and Researcher. The first step in her process was to develop survey questions which would accurately collect pertinent arts and culture data, reflecting each participant’s own experience regardless of the stage of their careers.

“In the past two years, we’ve heard a lot about the challenges, successes and frustrations of Philly Black and Brown Women Filmmakers. SIFT wanted to better understand how to move the conversation forward.” – Eboni Zamani, Study Architect

Over 40 women participated in the Survey. A three-hour long, moderator led, hybrid (virtual conferencing and in-person) follow up focus group was held in May 2022. These five participants took a deep dive into the issues of the survey, agreeing to share more of their personal and professional experiences.

“If 50% of the people who filled out the survey make between $15,000 and $49,0000 per year and over 60% have graduate degrees that is horrendous! In Philadelphia we need to make systemic change in our economic and arts ecosystem to improve Black and Latinx lives in a material way. Regardless of educational attainment, WOC filmmakers must have access to opportunity at every turn. Our entire society is less democratic, less safe, and less prosperous for that exclusion.” – Nadine Patterson, Study Producer

“I didn’t realize how impactful the survey would be until I started working with the compiled data and realized nothing like this has been documented on WOC in my city; those who work steadily and create without complaint, despite the many obstacles.” – LeAnne Lindsay, Study Designer

The “Listen To What I Say” Report results have been compiled into an easily read and discernible 21 page digital document. Including heartfelt quotes from the participants, graphs, charts and recommendations for action steps. The aim of this report serves as an invitation to funders, stakeholders, allies and supporters to come to the table prepared to listen, partner and strategize on plans with women of color film and media makers to enhance and sustain their lives, so as to enhance the sector and the region as a whole.

About SIFTMedia 215 Collective: SIFT means Sisters in Film & Television. SIFTMedia 215 is a cooperative that centers Black and Latinx women-identified independent media artists who work in the Philadelphia metropolitan area. As filmmakers, we seek to educate ourselves and the wider community by creating socially conscious, culturally relevant work that challenges mainstream narratives and structures. Our mission is to use our collective strength to amplify the work of and create meaningful opportunities for Black and Latinx Women content creators by providing a community of support to share resources, skills, and creative space.

About Philadelphia Assembly: Formed in 2019, The Philadelphia Assembly is a collective of culture bearers who share a commitment to the practice of arts, culture, and equitable community development and reflects the people who are here, committed, and doing the work to “keep the place.”

SIFTMedia 215 “Listen To What I Say” Report

The “Listen To What I Say” Report results have been compiled into an easy read and discernible 21 page digital document. Including heartfelt quotes from the participants, graphs, charts and recommendations for action steps. The aim of this report serves as an invitation to funders, stakeholders, all

Royal 62 Records has announced the release of Band Well’s new music compilation “War Stories.” The importance of this album cannot be overstated for music collectors. “War Stories” contains unique music influential to listeners from ages 20 – 60 and beyond, as the lyrics provide first-hand accounts from men and women who have served in war. Melomaniacs will learn history lessons from the Revolutionary War, Civil War, Vietnam War, WWI, WWII, and the Somali Civil War in the 1990s. “War Stories” made a large impact in digital music sales through release of the single “Christmas Day 1944,” which debuted in December 2021 and scored several thousand streams on Spotify. A subsequent single “Mad Tuesday,” released in the spring of 2022, caught the attention of a wide age group across the globe.

Impressive musicians from the United States, Germany, and England skillfully dress the storyteller lyrics of “War Stories” with freshly made sounds influenced by country, pop, folk, and rock music. “War Stories” communicates very well at a visceral level with listeners, and prestigious vocalists, including Thomas Niedermayer and Billy Rae Barnett, are key contributors. Band Well, a renowned studio band, best known for the 2020 release of “Bill’s Saloon,” is led by Jay Banwell, a musician-songwriter who manages the talents of numerous studio musicians and owns production responsibilities to the effort.

“War Stories” is available online on July 1, 2022 to help honor the 4th of July. The album and singles will be available digitally on Band Well’s website at bandwellmusic.com; copies also soon available at DISTROKID, Amazon, iTunes, Spotify and additional vendors.

Over the course of his career at his business consulting firm, Collaboration Business Consulting located in California, Michael Gunther has guided more than 500 businesses to achieve growth, trained thousands of leaders, and assisted nearly 300 businesses to get started. He asks his clients the tough questions to help them determine their roadblocks, then collaborates with implementing a solid plan to create profitable, sustainable businesses.

Even the rosiest statistics show that most new businesses fail. In “Me-To-We: The Shift Every Business Leader Must Make for Lasting Success,” Michael Gunther describes how entrepreneurship, essential at the beginning of every business, can easily change into a corrosive force. He analyzes why some companies grow and prosper while others struggle, and shows how entrepreneurs can evolve to make the crucial shift from “me” to “we” and become successful, collaborative leaders who motivate and inspire their employees.

Gunther shares his own journey as the owner of a business consulting company and his experiences working with over 500 small businesses. He debunks the prevailing myths about entrepreneurship that can derail a company’s growth, describes common roadblocks that stand in the way of success, and reveals the most important actions that entrepreneurs must take for their companies to flourish. Case studies demonstrate how good communication, collaboration, and accountability are key but are often the biggest challenges business leaders face.

This book is a must-read guide for leaders who want to grow start-ups into thriving, sustainable companies, and for owners of established businesses who want to grow even more. Gunther offers practical steps to change your mindset, improve your business practices, promote a productive, trusting work environment, and increase the odds of success.

About Publish Your Purpose
Publish Your Purpose is a hybrid publisher of non-fiction books. Our mission is to elevate the voices often excluded from traditional publishing. We intentionally seek out authors and storytellers with diverse backgrounds, life experiences, and unique perspectives to publish books that will make an impact in the world.

A boy destined to battle a mysterious evil with the fate of the world on his shoulders has surely swooned fans for the authors new release. Will he be able to defeat this evil and bring peace to the world?

When faced with difficulties, have courage and put on a brave face.

The fictional adventure Joe and the Peace Eternal (ongoing pub) by John Padilla Jr. will be featured at the LA Times Festival of Books in spring 2022. This book tells the story of a young hero, Joe, who is destined to save the world from the dark forces that have plagued humanity, bringing an end to the destruction and peace to the world. Where he must fight to the death to defeat this evil force and rescue his sister Rose, who is chained to a massive organ and forced to play Ludwig van Beethovens Moonlight Sonata.

The story begins with his father, Dr. Robert Benson, who tells him in secret that the world is in the grip of a biological chemical war waged by the New World Order, which may be planning to take over the world. He discovered that the dark forces plan to take over the world by releasing a deadly virus that will kill millions of people. Dr. Benson is on a race against time to save the world from this dangerous pandemic. Knowing this, he sends Joe on a journey to meet an ancient martial arts teacher that would help him on his journey to find peace eternal.

Finding the courage to heed his fathers words, Joe sets out on a journey to learn martial arts from an old Japanese samurai and Olympic swordplay fencing from a French Olympic champion.

Joe and the Peace Eternal is an immersive piece of narrative that will hook readers on the first chapter filled with adventure, action, deep and emotional character development, and plot that readers cant help but turn to the next page. Its such a page-turner that readers cant help but sympathize with Joe, such as how it weighs heavily on him as a hero, how it puts pressure on him to prepare for the fight, and how his strong mentality has inspired readers to face any adversity with courage.

Its so inspiring, entertaining, and strangely heartwarming that readers cant help but fall in love with it. Padilla has definitely outdone himself with this masterpiece, which has dramatic flair and emotional moments that one cant help but fall in love. Its a terrific book to read on those sunny, boring afternoons because it keeps readers entertained and satisfied for the rest of the day.

Will Joe be able to save humanity? Will he triumphantly return home as a hero? Find out more about Joes journey and grab a copy of John Padillas Joe and the Peace Eternal on RM Bookstore and come visit the upcoming LA Times Festival of Books in Spring 2022!

Joe and the Peace Eternal

John Teofilo Padilla Jr. was born in Albuquerque, New Mexico. He is a college graduate from Ottawa University in Liberal Arts. He enjoys plotting courses for new travels. He is a former United States Army Airborne Commando who was awarded the Meritorious Service Medal for chivalry. He is a Black Belt in martial arts under World Champions Eddie Mapula and Chuck Norris. He studied privately Brazilian Jiu-Jitsu directly from Master Rickson Gracie. He also studied Kenjutsu, Olympic Sword Fencing, Olympic Wrestling, and Wing Chun Kung Fu–details that he incorporates into his writings.

Now, he is a retired California Correctional Peace Officer that worked in Hells Lions Den of evil criminals, and currently lives in San Diego, California. 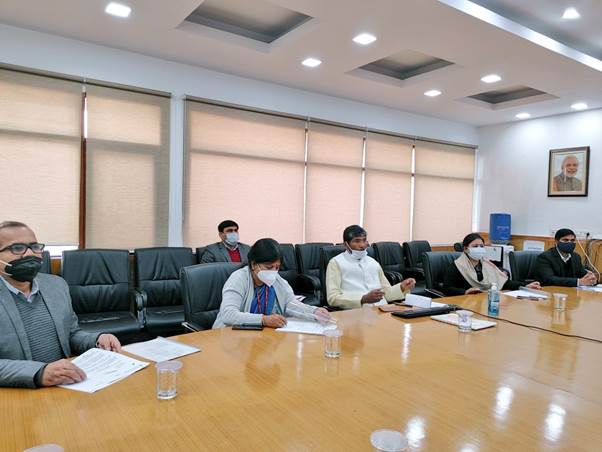 The objective of the Capacity Building Plan of the Ministry is to enable employees to be more creative, proactive, professional, technology-enabled, efficient, accountable and citizen centric by providing them training in domain areas relating to Food Processing Sector. Nearly 150 employees of the Ministry will be given training to build and strengthen behavioral, functional and domain competencies.

Various training modules for capacity building developed by NIFTEM, Sonepat and NIFTEM, Thanjavur were also launched during the event.