Consumer Price Index Numbers on Base 2012=100 for Rural, Urban and Combined for the Month of February 2022

The National Statistical Office (NSO), Ministry of Statistics and Programme Implementation (MoSPI) is releasing All India Consumer Price Index (CPI) on Base 2012=100 and corresponding Consumer Food Price Index (CFPI) for Rural (R), Urban (U) and Combined (C) for the month of February 2022 (Provisional) in this press note. CPIs for Sub-Groups and Groups for both All India and all States/UTs are also being released.

2.             The Price data are collected from selected 1114 urban Markets and 1181 villages covering all States/UTs through personal visits by field staff of Field Operations Division of NSO, MoSPI on a weekly roster. During the month of February 2022, NSO collected prices from 99.6% villages and 98.2% urban Markets while the Market-wise prices reported therein were 89.6% for rural and 92.9% for urban.

4.          Monthly changes in the General Indices and CFPIs are given below:

Note: Figures of February 2022 are provisional.

5.          Price data for CPI are received through web portals, maintained by the National Informatics Centre.

A far-sighted policy decision taken by Khadi and Village Industries Commission (KVIC) in 2018, to create a special reserve fund to deal with market fluctuations and other eventualities, has come as a savior for all Khadi institutions across the country, just when the entire textile industry is grappling with a steep price hike of the raw cotton.

In 2018, KVIC had decided to create a Products Price Adjustment Account (PPA), a Reserve Fund for its 5 Central Sliver Plants (CSPs), to meet market-driven eventualities. These CSPs are purchasing cotton and converting it into sliver and roving for the supply of Khadi Institutions, which converts it into yarn and fabric. The PPA fund was created by transferring just 50 paise to it from each kilogram of the total sliver/roving soldby these CSPs.

Three years down the line, when the entire textile sector is facing the brunt of short-supply and a steep hike in the price of raw cotton, KVIC has decided not to increase the cost of sliver/roving being supplied to the Khadi institutions by its sliver plants across the country despite the cotton prices surging by over 110 percent. Instead, KVIC will bear the excess cost of Rs 4.06 crore on procurement of raw cotton bales at the increased rates from the PPA Fund.

It is pertinent to mention here that the price of raw cotton has increased from Rs 36,000 per candy to Rs 78,000 per candy (each candy weighs 365 KG) in the last 16 months. This has put a direct impact on production of cotton apparels by major textile companiesacross the country,that have also reduced the production by 30 to 35 percent in the recent months.

This decision of KVIC, which has been taken for the first time to create such reserve fund, comes as a big relief for over 2700 registered Khadi institutions and over 8000 Khadi India Outlets that are already grappling with production&marketing challenges due to restrictions imposed during Covid-19 pandemic.

KVIC largely purchases cotton bales from Cotton Corporation of India (CCI) for its 5 CSPs located at Kuttur, Chitradurga, Sehore, Raebareli and Hajipur, that convert various varieties of cotton into sliver and roving. The Cotton varieties purchased by KVIC are BB mod, Y-1/S-4, H-4/J-34, LRA/MECH, MCU_5 and DCH_32. The Price difference reported in these days is from Rs 13000 per candy to Rs 40000 per candy of these varieties. KVIC will require 6370 cotton bales of different varieties by 31st of March 2022 which, as per the current rate, will cost Rs 13.25 crores as against Rs 9.20 crores as per the old rates.The price difference of Rs 4.05 crores will be met from the PPA reserve created by KVIC in these days.

The reserve fund has ensured that the Khadi institutions in the country remain unaffected by the price rise and the prices of Khadi cotton apparels also do not go up.

KVIC Chairman Shri Vinai Kumar Saxena said that this decision would save both the Khadi institutions as well as the Khadi buyers from any adverse impact of price rise. “Short supply of raw cotton from CCI and the consequent rise in price of cotton has hit the entire textile industry including Khadi. But KVIC has decided to continue the supply of roving/sliver to Khadi institutions at the old rates so as mitigate any financial burden on the institutions. At the same time, it will also benefit crores of Khadi buyers as there will be no increase in the price of Khadi fabric and garments. It is KVIC’s commitment to every Khadi buyer to provide Khadi at affordable prices in tune with Hon’ble Prime Minister’s vision of “Khadi for Nation”, Saxena said.

Khadi has nearly 9 percent share in the Indian textile industry and produces nearly 150 million Sq Mtr fabric per year. With this decision, Khadi has emerged as the only entity that is unaffected by the steep price rise of cotton. Khadi buyers and Khadi institutions, thus, have a reason to rejoice.

Khadi Institutions have unanimously welcomed the move and thanked KVIC for the big support saying this would safeguard the institutions against any market adversities. “Cotton prices have gone up by over Rs 70 per KG. This step of KVIC will help Khadi Institutions survive during these difficult times. Any hike in the price of sliver and roving would have put a huge financial burden on Khadi institutions that are yet to recover from the impact of Covid19,” said Shri Sarthank Singla, Secretary of Khadi Udyog Jathlana, Ambala.

Shri Sanjay Shah of Bharat Khadi Gramodyog Sangh, Ahmedabad, said that hike in cotton prices would have a direct bearing on the production of Khadi and wages of the artisans. “If the cost of raw material goes up, the production will naturally come down and so will the wages being given to the artisans. I am thankful to KVIC that has saved the institutions and artisans from the crisis,” he said.

The Labour Bureau, an attached office of the M/o Labour & Employment, has been compiling Consumer Price Index for Industrial Workers every month on the basis of retail prices collected from 317 markets spread over 88 industrially important centres in the country. The index is compiled for 88 centres and All-India and is released on the last working day of succeeding month. The index for the month of January, 2022 is being released in this press release.

The All-India CPI-IW for January, 2022 decreased by 0.3 points and stood at 125.1 (one hundred twenty five and point one). On 1-month percentage change, it decreased by 0.24 per cent with respect to previous month compared to decrease of 0.51 per cent recorded between corresponding months a year ago.

Y-o-Y Inflation based on CPI-IW (Food and General) 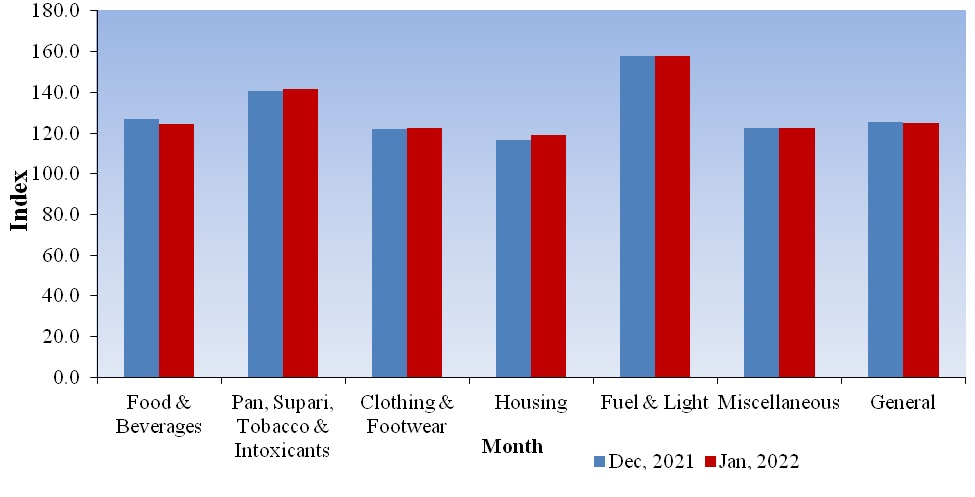 The next issue of CPI-IW for the month of February, 2022 will be released on Thursday, 31st March, 2022. The same will also be available on the office website www.labourbureaunew.gov.in.

For “Consumer Price Index for Industrial Workers on base 2016=100”, please click here

BARCELONA, Spain – Feb. 16, 2022 – PRLog — Optimus Price, the Spanish leading solution for pricing automation with AI, has just announced the closure of a €1 million funding round. The investment will be used to scale its operations across Europe, integrate its platform with new channels, and improve its technology with pricing models for more sectors and product categories.

Optimus Price is a software-as-a-service (SaaS) that uses Artificial Intelligence to improve retail profits, both physical and e-commerce. Thanks to the use of AI, Optimus Price makes sure that every product in the store always has the optimal price according to demand and market conditions.

The demand for pricing software has increased 75% since the beginning of the COVID-19 pandemic. Half of all retailers still use outdated processes and tools to set prices manually. This leads to inefficiencies, and the inability of those businesses to compete effectively, creating opportunities for those that can move first and adapt quickly and proactively to consumer needs.

The company, a retail-tech SaaS, has increased its monthly recurring revenue (MRR) by 1800% in this period, and has managed to acquire clients such as Nestlé, partners such as Seidor, and presence on eBay. Optimus Price is also backed by Telefónica and Wayra, its open innovation hub.

This round has been driven by Zone2Boost, the international innovation program promoted by CaixaBank, Visa, Global Payments and Worldline; Wayra; a mix of international business angels, including two of the most relevant in Spain, Albert Armengol and Andreas Mihalovits, and the influx of almost 500 micro-investors through a campaign on UK-based crowdfunding platform Crowdcube.

Prior to the round, Optimus Price merged with the start-up Athena in late 2020. Athena, a specialist in price and competitor monitoring, improved Optimus Price’s portfolio, combining both technologies in a single solution.

“We are very grateful to our investors for seeing the potential in our vision and platform, and excited to see how our positive traction is matching their interest”, says Carlos Fenollosa, CEO of Optimus Price.

Xavier Tous, General Manager at Optimus Price says, “this influx of capital will certainly help us continue in our existing growth path, by accelerating the development of our operational capabilities, letting us scale in new geographies, and allowing for the development of new artificial intelligence models which will overall strengthen our platform”.

Optimus Price is the Spanish leading solution for price optimization with AI. Its unique technology allows retailers and brands to increase their profits without effort through algorithms which dynamically calculate the optimal price depending on competitors, seasonality, demand, stock, and more.

Its pricing platform helps some of the biggest brands in the world as well as small e-commerces.

This European company has its headquarters in Barcelona. Founded by researchers of the Barcelona Supercomputing Center and serial entrepreneurs, Optimus Price has been backed by well-recognised investors such as Seedrocket, Wayra, ESADE and IESE, and has received recognition by universities, public institutions, start-up accelerators, multinationals, and the press.

Consumer price Index Numbers on Base 2012=100 for Rural, Urban and Combined for the Month of January 2022

The National Statistical Office (NSO), Ministry of Statistics and Programme Implementation (MoSPI) is releasing All India Consumer Price Index (CPI) on Base 2012=100 and corresponding Consumer Food Price Index (CFPI) for Rural (R), Urban (U) and Combined (C) for the month of January 2022 (Provisional) in this press note. CPIs for Sub-Groups and Groups for both All India and all States/UTs are also being released.

2.   The Price data are collected from selected 1114 urban Markets and 1181 villages covering all States/UTs through personal visits by field staff of Field Operations Division of NSO, MoSPI on a weekly roster. During the month of January 2022, NSO collected prices from 99.7% villages and 98.2% urban Markets while the Market-wise prices reported therein were 89.3% for rural and 93.3% for urban.

3.   All India Inflation rates (on point to point basis i.e. current month over same month of last year, i.e. January 2022 over January 2021), based on General Indices and CFPIs are given as follows:

4.   Monthly changes in the General Indices and CFPIs are given below:

Note: Figures of January 2022 are provisional.

5.    Price data for CPI are received through web portals, maintained by the National Informatics Centre.