Prime Minister Shri Narendra Modi will be visiting Schloss Elmau, Germany at the invitation of Chancellor of Germany, H.E. Mr. Olaf Scholz, for the G7 Summit under the German Presidency on 26-27 June 2022. During the Summit, Prime Minister is expected to speak in two sessions that include Environment, Energy, Climate, Food Security, Health, Gender Equality and Democracy. In an effort to strengthen international collaboration on these important issues, other democracies such as Argentina, Indonesia, Senegal and South Africa have also been invited. On the sidelines of the Summit, Prime Minister will hold bilateral meetings with leaders of some of the participating countries.

The invitation to G7 Summit is in keeping with the tradition of strong and close partnership and high-level political contacts between India and Germany. Prime Minister’s last visit to Germany was on 2 May 2022 for the sixth edition of the India-Germany Inter-Governmental Consultations (IGC).

After attending the G7 Summit, Prime Minister will be travelling to United Arab Emirates (UAE) on 28 June 2022 to pay his personal condolences on the passing away of H.H. Sheikh Khalifa bin Zayed Al Nahyan, the former UAE President and Abu Dhabi Ruler. PM will also take the opportunity to congratulate H.H. Sheikh Mohamed bin Zayed Al Nahyan on his election as the new President of UAE and Ruler of Abu Dhabi.

Prime Minister will depart from UAE the same night on June 28.

The Prime Minister’s Award for Outstanding Contribution towards the Development and Promotion of Yoga, one of the most coveted honours in the field of Yoga, has been announced for the year 2021. Two individuals, namely Shri Bhikkhu Sanghasena Leh, Ladakh and Shri Marcus Vinicius Rojo Rodrigues, Sao Paulo, Brazil, and two organisations, namely, The Divine Life Society, Rishikesh, Uttarakhand and the British Wheel of Yoga, United Kingdom are the recipients of the same.

The awards for the Outstanding Contribution towards the Development and Promotion of Yogawas announced by the Prime Minister of India on the occasion of the 2nd International Day of Yoga celebrations at Chandigarh on 21st June, 2016. The Ministry of Ayush, Government of India developed the guidelines for the said awards. A two-stage selection process through a Screening Committee (for preliminary evaluation) and Evaluation Committee (Jury for final evaluation), is followed in a transparent manner for finalizing the awards.  Nominations for the awards for 2021 were invited through an open advertisement on MyGov platform. Start date for the same was 29th March, 2021 and end date was 11th May, 2021.

The Screening Committee chaired by Secretary (Ayush) drew up a shortlist from the 120 applications received as well as the Committee’s own inputs. The Jury chaired by the Cabinet Secretary, examined the recommendations of the Screening Committee, and also made its own analysis of the contributions made by the institutions and individuals shortlisted.  The selection was done after considering nominations received under four different categories, namely International Individual, International Organisation, National Individual and National Organisation.

Following are the awardees of the Prime Minister’s Awards for Outstanding Contribution towards the Development and Promotion of Yoga for the Year 2021:

The winners will be felicitated with of a Trophy, Certificate and a Cash Award each. The value of each Cash Award would be Rs. 25.00 lakh.

Vice President of India and Chairman of Rajya Sabha Shri M. Venkaiah Naidu has said that the Prime Ministers Museum (Pradhanmantri Sangrahalaya) instills pride in every citizen for the nation by offering an immersive experience of the country’s successful democratic journey and its socio-economic transformation since independence.

Shri Venkaiah Naidu, along with his spouse Smt. Usha Naidu, today visited the Pradhanmantri Sangrahalaya located in the Nehru Memorial Museum and Library (NMML) accompanied by his wife Smt. Usha Naidu and spent 90 minutes keenly watching various components of the audio-visual presentations on India’s journey to  the present. 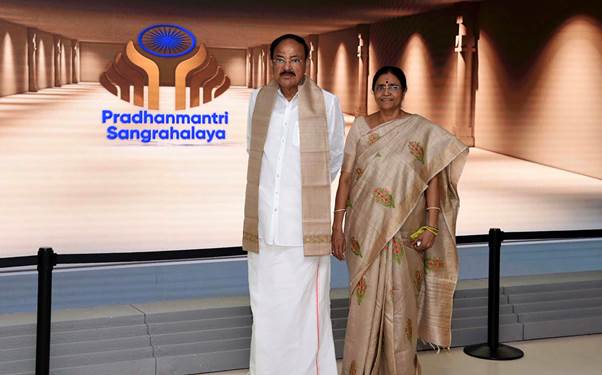 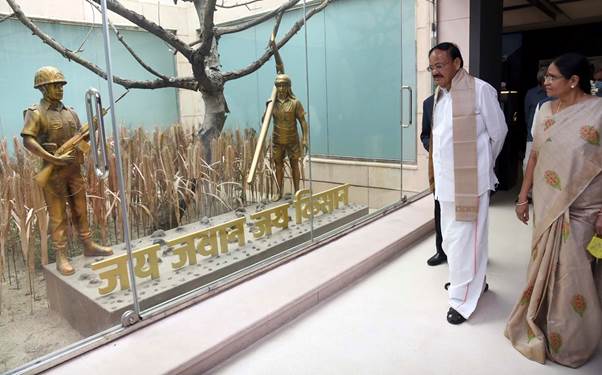 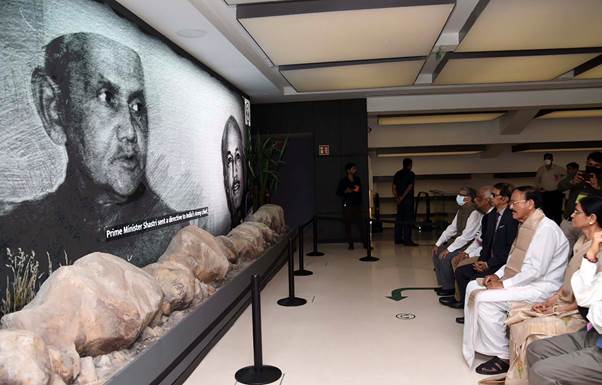 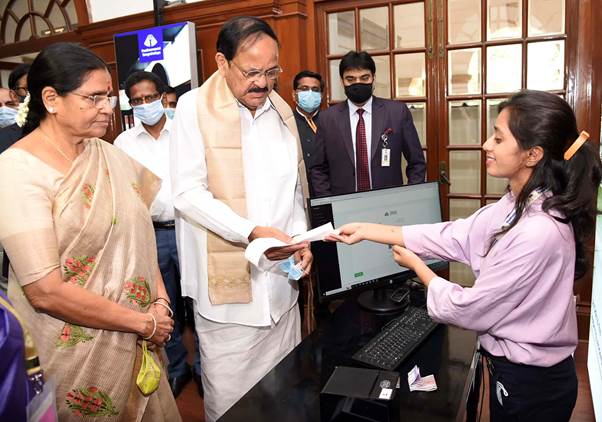 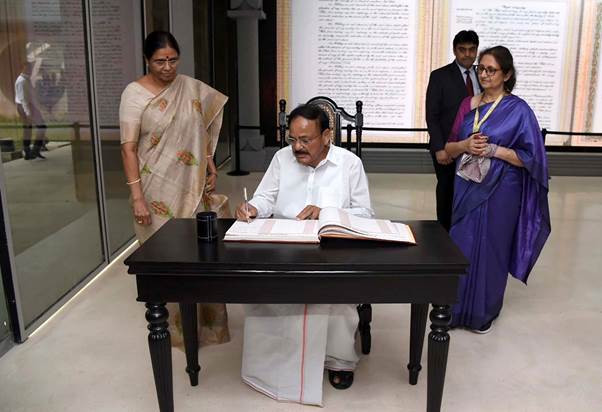 The Vice President along with his spouse visiting Pradhanmantri Sangrahalaya today.

Writing his comments in the Visitors’ Book, Shri Naidu said; “The museum showcases and honours the diversity in our national leadership and thereby sends the message of inclusiveness, which is vital for a vibrant democracy like ours. This exhibition is bound to inspire every citizen through the immersive experience it offers of the transformation of our nation from fighting poverty and illiteracy to scaling new heights in space exploration.”

Shri Naidu further noted that the elevating experience the modern, technology based museum offers to the visitors is “Certain to enhance his or her pride for the nation and prepares them for the giant steps the nation will take in the coming years to reach the top among the comity of nations.”

Shri Naidu recounted his experience at the Sangrahalya in a facebook post and urged every citizen to visit it for inspiration and to be filled with pride.

The Vice President was particularly thrilled by the simulated helicopter ride into the future of India encasing extension of various mega infrastructure projects like National Highways, long bridges and tunnels, Smart Cities and other new projects in progress in various parts of the country.

The Prime Ministers Museum offers accounts of major pre-independence events, prosperity of the country in the mid 18th century and the subsequent British legacy, making of the Constitution, the challenges faced and achievements made during the tenures of 14 Prime Ministers from Pt. Jawaharlal Nehru till Dr. Manmohan Singh.

Prime Minister Shri Narendra Modi met former Japanese Prime Ministers Yoshiro Mori and Shinzo Abe on 24 May 2022 in Tokyo, Japan. Yoshiro Mori is the current Chairperson of the Japan-India Association (JIA) while Shinzo Abe will be taking over this role shortly. The JIA, established in 1903, is one of the oldest friendship associations in Japan.

Prime Minister appreciated the significant contributions made by JIA under the leadership of Yoshiro Mori in promoting exchanges between India and Japan in political, economic and cultural fields. Prime Minister conveyed his best wishes to Shinzo Abe on his new responsibilities and looked forward to the JIA continuing its important role.

The leaders also discussed the broad canvas of India-Japan Special Strategic and Global Partnership as well as the shared vision of India and Japan for a peaceful, stable and prosperous Indo-Pacific. Discussions were held on ways to further promote cultural and people-to-people ties.


Prime Minister’s Statement ahead of his visit to Japan

I will be visiting Tokyo, Japan from 23-24 May 2022 at the invitation of His Excellency Mr. Fumio Kishida, Prime Minister of Japan.

In March 2022, I had the pleasure of hosting Prime Minister Kishida for the 14th India-Japan Annual Summit. During my visit to Tokyo, I look forward to continuing our conversation further, with an aim to strengthen the India-Japan Special Strategic and Global Partnership.

In Japan, I will also participate in the second in-person Quad Leaders’ Summit, which  will provide an opportunity for the leaders of the four Quad countries to review the progress of Quad initiatives. We will also exchange views about developments in the Indo-Pacific region and global issues of mutual interest.

I will hold a bilateral meeting with President Joseph Biden, where we will discuss further consolidation of our multi-faceted bilateral relations with U.S.A. We will also continue our dialogue on regional developments and contemporary global issues.

The newly-elected Australian Prime Minister Anthony Albanese will be joining the Quad Leaders’ Summit for the first time. I look forward to a bilateral meeting with him during which the multifaceted cooperation between India and Australia under the Comprehensive Strategic Partnership, and regional and global issues of mutual interest will be discussed.

Economic cooperation between India and Japan is an important aspect of our Special Strategic and Global Partnership. During the March Summit, PM Kishida and I had announced our intention to realize JPY 5 trillion in public and private investment and financing over the next five years from Japan to India. During the forthcoming visit, I will meet with Japanese business leaders with the goal of further strengthening economic linkages between our countries, in pursuit of this objective.

Japan is home to nearly 40,000 members of the Indian diaspora, who are an important anchor in our relations with Japan. I look forward to interacting with them.