A US delegation of the premier National Science Foundation (NRF), currently on visit to India, today called on Union Minister of State (Independent Charge) Science & Technology; Minister of State (Independent Charge) Earth Sciences; MoS PMO, Personnel, Public Grievances, Pensions, Atomic Energy and Space, Dr Jitendra Singh and discussed bilateral collaboration between the two countries as well as the ways to carry this collaboration to the next level. 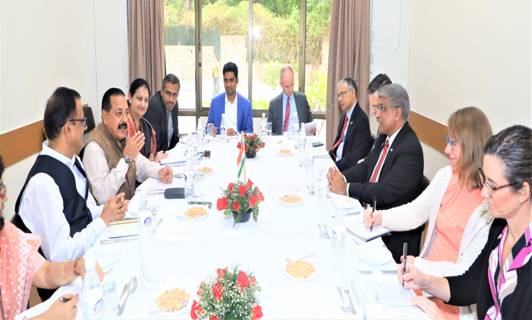 During the delegation level talks, Dr Jitendra Singh said, both the sides have already identified the sectors and collaboration is on in areas like healthcare, technology, Space, earth and ocean science, energy, emerging technologies and cooperation in Science & Technology education. The Minister underlined that India and the United States have a long-standing connection and shared interest when it comes to scientific discovery and technological innovations and time has come to strengthen and leverage these connects for larger global good.

Director, National Science Foundation (NSF) of United States and head of the delegation Dr. Sethuraman Panchanathan assured Dr Jitendra Singh that the subjects identified in the two-day brainstorming session would be taken to logical conclusion. He also promised to open new avenues of cooperation in areas like Artificial Intelligence, Biotechnology, Geosciences and Astrophysics. 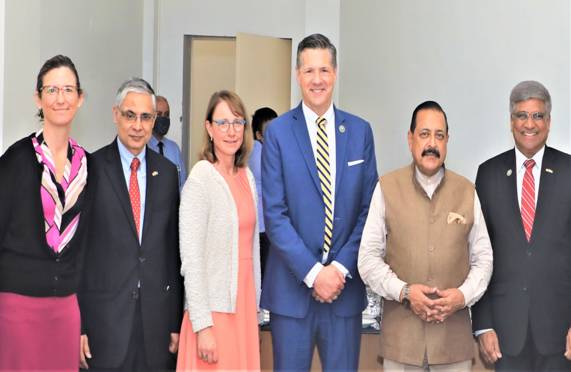 Dr Jitendra Singh told the NSF delegation that both sides must focus on meaningful, targeted, deliverable-driven R&D partnerships in technology areas such Quantum, Metaverse, Clean Energy Technologies, Cyber-Physical Systems, Advanced Materials and Communications Technologies. The Minister pointed out that the Indian Scientific diaspora is one of the world’s largest and powerful diaspora communities in shaping global discourse, particularly in the technological innovation landscape. He said, both the countries must explore avenues for the US and India to jointly identify, nurture, and promote deep-tech start-ups in areas of mutual interest.

Dr Jitendra Singh also sought the support of NSF for the proposed Integrated Data System. He said, data collection at present is being done by various institutions in different ways, but the Integrated Data System will go a long way in data analytics and associated benefits. The Minister said, the knowledge partnership with NSF-National Centre for Science and Engineering Statistics will be of great value addition in terms of long-term capacity development in this area.

Dr Jitendra Singh also called for scaling up the cooperation in the Space sector and mainly in emerging areas like management of space debris. He also recalled that the NASA-ISRO Synthetic Aperture Radar satellite is expected to be launched in 2023. The Minister said, Science and technology education partnership has been another dimension of the outreach—to establish linkages between American and Indian institutions and students. Education Roundtable held last year with participation of a number of STEM-focused universities.


Parliamentary Delegation from Mozambique Calls on The President


A Parliamentary Delegation from Mozambique led by Ms Esperanca Laurinda Francisco Nhiuane Bias, Speaker of the Assembly of the Republic of Mozambique, called on  President of India, Smt Droupadi Murmu, at Rashtrapati Bhavan today (July 29, 2022).

Welcoming the delegation, the President said that she was happy to receive them at Rashtrapati Bhavan as the first international delegation after her assumption of the office on 25 July 2022. She noted that India and Mozambique enjoy close friendly relations with regular exchange of high-level visits between the two countries.

The President said that Mozambique is our strategic partner and close ally. Indian companies have invested around US$10 billion in Mozambique’s natural gas and mining sectors. The Government of India has also provided Line of Credit for different projects in Mozambique. She also noted that the Indian diaspora in Mozambique is contributing to the economic development of Mozambique.

The Government of Canada is committed to championing gender equality and taking action to ensure that women and girls can succeed in Canada and around the world. The Honourable Marci Ien, Minister for Women and Gender Equality and Youth, led the Canadian delegation to the 66th Session of the United Nations Commission on the Status of Women (UNCSW66), which concluded today. The event was held between March 14 and 25, 2022, both virtually and in New York City.

The Government of Canada is committed to championing gender equality and taking action to ensure that women and girls can succeed in Canada and around the world.

The Honourable Marci Ien, Minister for Women and Gender Equality and Youth, led the Canadian delegation to the 66th Session of the United Nations Commission on the Status of Women (UNCSW66), which concluded today. The event was held between March 14 and 25, 2022, both virtually and in New York City.

In her national statement to her international counterparts, Minister Ien provided an overview of Canada’s commitment to ensuring a gender-responsive approach to climate and biodiversity policy both domestically and internationally. The Minister also emphasized how Canada’s investment in a workforce that is agile, resilient, and equipped with the skills to deliver on Canada’s transition to a net-zero economy, will help women and girls acquire the tools they need to play an active part in that transition, particularly in the STEM sector.

Minister Ien also participated in a number of meetings, events and bilateral discussions, including with the Executive Director of UN Women, the UN Special Rapporteur on Violence against Women, as well as Trinidad and Tobago, Argentina, Italy, Dominican Republic, Colombia, UK, Australia and New Zealand representatives. She also met the US Ambassador to the United Nations. Parliamentary Secretary Jenna Sudds participated in two virtual side events hosted by Canada: one in partnership with the Canadian Women’s Foundation, focussing on “Gender-Based Violence and Climate Crisis: Forging Vital Connections,” and another on “Empowering Women and Girls to Advance Gender Equality and Climate Change Solutions.”

Throughout the session, members of the Canadian delegation collaborated with delegates from other United Nations members states, as well as with international CSOs to address this year’s priority theme: Achieving gender equality and the empowerment of all women and girls in the context of climate change, environmental and disaster risk reduction policies and programmes.

Participants at CSW66 discussed some of the most critical issues facing women and girls in the world today.  These negotiations resulted in a set of agreed conclusions, to set clear priorities and key recommendations for a path forward on gender equality and the empowerment of women and girls. In addition to the agreed conclusions, member states negotiated the resolution on the Methods of Work for the CSW, which sets out the format of the upcoming meetings, the preparatory processes, and civil society participation. These negotiations take place every five years and are critical in helping formalize the process by which civil society can engage in the work of the Commission.

Canada is looking forward to next year’s CSW, which will focus on innovation and technological change, and education in the digital age for achieving gender equality and the empowerment of all women and girls.

“It was a pleasure to meet with Canadian delegates, women’s organizations and my international counterparts at the 66th session of the UN Commission on the Status of Women. Women make invaluable contributions to our communities, and we need their expertise to develop effective environmental policies that reflect the intersectional lived experiences of Indigenous, Black and racialized women. As we work with our global partners, Canada will continue to foster a gender-responsive approach to climate change.”

The Honourable Marci Ien,
Minister for Women and Gender Equality and Youth

Johise Namwira
Press Secretary
Office of the Minister for Women and Gender Equality and Youth
873-353-0985
Johise.Namwira@cfc-swc.gc.ca

With the closing of the Tokyo 2020 Olympic Games today (August 8), the Chief Executive, Mrs Carrie Lam, concluded the performance of the Hong Kong, China Delegation. She expressed her utmost admiration for the athletes’ best results in Hong Kong history and her gratitude for the staunch support of various sectors to the athletes.

“The Hong Kong athletes have displayed the extraordinary capability of Hong Kong at the Tokyo 2020 Olympic Games, capturing a gold medal, two silver medals and three bronze medals in five sports and achieving the city’s best results in history. We are moved by the courage and perseverance of all the athletes in competitions, with a number of them breaking Hong Kong records or their own records. Hong Kong athletes’ performances have made Hong Kong people feel proud. I extend my sincere congratulations to them.

“The success of the Hong Kong athletes at this Olympic Games did not come about by chance. In addition to their tireless efforts, it was also down to the support of the coaches and support teams, the Hong Kong Sports Institute (HKSI), the Sports Federation and Olympic Committee of Hong Kong, China and the national sports associations. The encouragement and the trust of the family members of the athletes was the key to success. I also thank the commercial sector for its award schemes, especially the Henderson Land Commendation Scheme for Elite Athletes sponsored by Henderson Land Group, to encourage athletes to achieve distinguished results, as well as the help by local universities and research and development teams to leverage scientific research achievements to enhance the performance of athletes.

“People’s enthusiasm is very important to athletes. The Hong Kong Special Administrative Region (HKSAR) Government secured the broadcasting rights to the Tokyo 2020 Olympics Games and allowed the five TV license holders to broadcast for free. Over the past 10 days or so, people cheered for athletes no matter whether they were at home, at work, in the malls or even on the streets, giving athletes spiritual support,” Mrs Lam said.

Mrs Lam said that the HKSAR Government has been proactively allocating resources to develop elite sports in the past decade. Its initiatives include reconstructing the HKSI and building the Hong Kong Velodrome to ensure the provision of the best training facilities for athletes; setting up the Elite Athletes Development Fund to secure sufficient financial resources for the HKSI to meet the needs of athletes in various aspects and enhance the remuneration of elite athletes; providing scholarships and learning support for elite athletes’ dual career development in sports and academics; and improving retirement arrangements for athletes including retirement cash incentives and comprehensive employment support. In the year of 2021/22, the Government’s annual funding for the HKSI, through the Elite Athletes Development Fund, amounted to $737 million, representing an increase of about 42 per cent over the year of 2017/18. Amid the epidemic, the Government has been in close communication with the HKSI and relevant national sports associations to take appropriate anti-epidemic measures to protect athletes’ well-being and flexibly adjust the plans of training and competitions, enabling the continuation of elite sports training for athletes.

During the visit to the HKSI to watch Hong Kong athletes’ performances at the Tokyo 2020 Olympic Games today, Mrs Lam also inspected the facilities of the institute and the site where a new facilities building is planned to be built.

“I hope that the good performance of athletes at the Tokyo 2020 Olympic Games will inject new impetus to Hong Kong’s sports development, encouraging more enterprises and members of the public to support Hong Kong athletes and motivating more people to do exercise. The HKSAR Government will continue to support sports development in Hong Kong in terms of policy, facilities and resources.

“There will be a number of important sports events taking place shortly, including the Tokyo 2020 Paralympic Games to be held later this month and the National Games to be held in Shaanxi Province next month. I call on various sectors to continue to support Hong Kong athletes to bring glory home in the competitions,” Mrs Lam said.