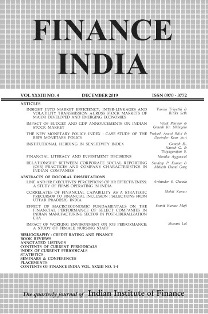 As per one of the study published in the recent issue of Finance India – Quarterly Journal of Finance, Vol. 33, No. 4 (https://www.financeindia.org/volumes/v33no4.htm) titled “Institutional Herding in Sensitivity Index” by Ganesh R., Doctoral research scholar, Prof. Naresh G. and Prof. Thiyagarajan S., both Assistant Professor, The School of Management, Pondicherry University states that When markets all over the world as part of liberalisation of markets, are vying each other to attract huge funds into their market through big institutional investors including FIIs, regulatory authorities are also apprehensive of the destabilising effect, large funds players can cause to the market. Study of herding tendencies among institutional investors in the market during normal periods as well as during crisis periods, is hence still a topic of active research among all stake holders. Present study has not shown any evidence of herding or such irrational behaviours in Indian market. The finding is hence encouraging for advocates of open economy and globalisation of stock markets.
According to the study, mimicking other investor’s investment pattern is called herding and is a general tendency of investors; however investors mimic mostly when they lack confidence in themselves in taking investment decisions. Institutional investors may also herd when managers try to keep their reputation in the firm and there are some studies which evidences, herding among institutional investors are more than that among individual investors. The present study investigates the presence of herding among institutional investors in Indian bourses. LSV (1992) model is applied on the daily data from ACE Equity database for the period 1st January 2004 to 31st December 2014. The study aims to investigate the herding mentality of institutional investors during the period of the study which forms the post liberalisation period in India and also includes the 2008 global financial crisis. The result shows that there is no overall herding behaviour among institutional investors during the period.
The bulk and block trading on the top stocks alone is considered for the study. The results show that even though there are signs of herding in some stocks, they are not large enough to produce any significant herding in the market for the entire period of study. Examination of herding even within shorter durations which included the global financial crisis and major political changes in the country produced no overall herding in the market as is evident from the negative values for the mean of herding measures for all the periods of study. This study also reveals that during global financial crisis, institutional investors minimised trading, and showed very low risk tolerance and also no overall herding in the market. The low level herding observed in few stocks were mostly buy herding, indicating tendency to invest in Indian market by institutional investors.