ATLANTA – Aug. 18, 2022 – PRLog — Veteran TV & film development executive and producer Nichelle Protho is proud to premiere her directorial debut “Two Classes of 1968,” a poignant documentary and important untold story of black history, in the upcoming 13th Annual BronzeLens Film Festival. Amidst the backdrop of the civil rights movement, the film, produced and written by Protho along with co-writer Monice Mitchell Simms and narrated by Hill Harper (“The Good Doctor,”http://www.prlog.org/”Get on the Bus”), chronicles a group of African-American Catholic school students from Immaculate Conception Academy High School (ICA) in Augusta, Georgia who became unwitting agents of social change as the first group to integrate Aquinas High, an elite white Catholic school. “The debate around Critical Race Theory has only increased my passion about being historically literate, and especially about my community and its people.” says Nichelle Protho.

“Two Classes of 1968” tells the story of a close-knit group of childhood friends & students from the Golden Blocks neighborhood – a proud & self-sustaining Black community near the Savannah River.  This bubble provided a safe haven for its children, free from the darker realities of racism and the residual affects of post slavery era Jim Crow. However, when the powerful arms of the Catholic Church intersected with the Brown vs Board of Education Decision, they were forced to leave behind their school and the nuns that loved them just before their senior year.

“This film not only serves as a historical document, it provides an exceptional jumping off point for frank discussions of race today. It is a perfect resource for every age, but especially useful in secondary school settings,” says Joseph Floyd, M.D., executive producer and member of the class of 1968. “Although this is a story about the past, it encourages important discussion about today’s issues and it resonates courage and perseverance that is incredibly relevant today,” added Terrye Thompson, executive producer and member of the class of 1968.

Prior to premiering at the BronzeLens Film Festival, the film has received tremendous support from the city of Augusta, the Augusta Museum of History, Catholic Diocese of Savannah and the historical Imperial Theater.

About the festival: BronzeLens Film Festival is a non-profit organization, founded in 2009, that is dedicated to bringing national and worldwide attention to Atlanta as a center for film and TV production for people of color. The mission of BronzeLens is two fold: to promote Atlanta as the new film mecca for people of color; and to showcase films and provide networking opportunities that will develop the next generation of filmmakers.

The documentary screens on Friday, August 26th at 11:00am ET in Theater 3 at the IPIC Theater Colony Square in Midtown Atlanta.  Film festival pass registration and event tickets are available at: https://bronzelens.eventive.org/schedule/two-classes-of-1968-62da29ac8cc26d005c5a6e3a

For more information about the film’s premiere, visit their page here (https://bronzelens.eventive.org/films/two-classes-of-1968…).

International and National Jury at #MIFF2022

Subbiah Nallamuthu a five time National Film Award winning wildlife film maker has made innumerable documentaries on environment and the interaction between humans and the ecosystem such as ‘Earth File’ for BBC World and ‘The World Gone Wild’ for Animal Planet.  He is a regular jury member of the Jackson Hole Wildlife Film Festival and has also served as the jury chairman of the Indian Panorama Film Festival (2021). His passion for the Royal Bengal Tiger has translated into five tiger-centric international documentaries for National Geographic Channel and BBC.

Iranian-born and French-based, producer and journalist Mini RAD has been the festival director of the Festival Après Varan in Paris. Her first film ‘For Me the Sun Never Sets’ was awarded the prize for best documentary at the Cinema Vérité Film Festival in Tehran. Her filmography includes ‘Persian Tales’, ‘Jean Rouch in Iran’, ‘The Future of the Past’, ‘Pierre and Yolande Perrault’. She is also the founder of World Cultural Diversity, which produces films of cultural and anthropological interest.

French producer and director Jean Pierre Saire’s foray into cinema began in 1970 with the direction of three award-winning short films. He has worked on over thirty films that have won awards at film festivals around the world including the Cannes Film Festival, the Academy Awards and the Venice International Film Festival. He has also held executive positions in a number of influential production companies such as Incite Productions, Etamp, Septembre Production and ARTE.

Anant Vijay, a journalist with over two decades of experience on cinema, politics, culture and literature, served on numerous jury and selection committees across India.  He was the jury chairman at the National Film Awards and the chairman of the selection committee of Konkani films at the International Film Festival of India (2019).

Israeli filmmaker, theatre director and academic Dan Wolman has recently received the Lifetime Achievement Award at the Jerusalem International Film festival and the Silver Hugo at the Chicago International Film Festival for his contributions to cinema. . His debut feature film ‘The Dreamer’ was an official entry at the Cannes Film Festival. His filmography includes ‘Floch’ , ‘My Michael’, ‘An Israeli Love Story’ and ‘Valley of Strength’. His films have been screened at festivals around the world including the international film festivals of Cannes, Venice, India and Shanghai.

Jayasree Bhattacharya’s  journey in cinema started as an assistant director to the directors Buddhadeb Dasgupta and Rituparno Ghosh. Her film ‘Madur’ won the Best Film award at the Dhaka International Film Festival. She also won the Best Director award for her film ‘Binisutarmala’ at the International Women’s Film Festival, Kolkata.

Sanjit Narwekar is an author, publisher and documentary filmmaker with more than four decades of cross-media experience in journalism, public relations, publishing and filmmaking. A former news editor of Screen, editor of TV & Video World and Documentary Today, he has also served on innumerable film selection committees and juries including the National Critics Jury, MIFF (2006), Cinema Writing Awards and the National Film Awards (1999). His work as a filmmaker includes the Films Division-produced ‘India Unveiled’, ‘Lavni Rupdarshan’ and ‘Nations in Turmoil’.

A  journalist, author and film critic Ashley Ratnavibhushana  is also the director of the Asian Film Centre (AFC) in Sri Lanka. He is currently a board member and the jury coordinator for the Network for the Promotion of Asia Pacific Cinema (NETPAC). He is also a member of the International Federation of Film Critics (FIPRESCI) and the president of the Sri Lanka Federation of Film Societies. He was the executive coordinator of the Commonwealth Film Festival (2013) held in Colombo and the Senior Asian Programmer for the second edition of the International Film Festival of Colombo.

Renowned film editor Subhash Sehgal has worked on more than 250 films in the Indian film and television industry. He has won numerous National Film awards for his works in Punjabi cinema, namely ‘Chann Pardesi’, ‘Madhi Da Deeva’ and ‘Kachehari’. As an editor, he has worked with leading filmmakers of Indian cinema such as Ramanand Sagar, Zia Sarhadi, Gulzar, K. Bapaiah, Ravinder Peepat and Sudhendu Roy among many others. His work as a director includes the films ‘Pyar Koi Khel Nahin’ and ‘Yara Silly Silly’.

After making a life-changing decision to join the U.S. Navy, Janae experienced yet another petrifying adventure when she was amongst the first service members to be forward-deployed in support of Operation Enduring Freedom at just nineteen. This war would go on to last 20 years.

Some would label her a hero for her contributions to preserving freedom around the world. But most importantly, Janae became the hero she always needed for herself.

She became a successful businesswoman, where she was recently selected as the Chief of Air Force Lodging, managing a portfolio of 88 Air Force Hotels. And after gaining a large social media platform, she turned her childhood dream into a reality by opening an online fashion boutique where she helps women step out of their comfort zones and embrace their own “flaws” as what makes them unique.

About Janae Sergio: Janae Sergio is a mom, wife, philanthropist, fashion entrepreneur, social media motivator, and the Chief of Air Force Lodging, where she manages a portfolio of 88 Air Force Inns. In 2018, Janae’s social media platform skyrocketed, and she took advantage of the opportunity to pair her love for fashion with her dream of empowering women through her quickly growing online clothing boutique. She is a Combat Navy Veteran who was amongst the first group of service members to be forward-deployed aboard the USS John C Stennis one month after the 9/11 attacks to kick off Operation Enduring Freedom. Her Navy achievements include dual warfare certifications and four Navy and Marine Corps Achievement (NAMs) medals.

Prior to being sent to war, Janae was no stranger to facing the unknown, as that’s exactly what she had to do when she was dropped off at a homeless shelter at the young age of 16, where she spent the next 2 1/2 years avoiding attempts to lure her into drug addiction and the sex trafficking industry.

By embracing the victor mindset, Janae became the hero she always needed. Through her story, Janae has been committed to giving back to the very community she rose from. She has created multiple programs geared at mentoring at-risk youth towards creating a better future for themselves. She also uses her social media influence to provide necessities to the homeless in her community. Janae has been married for 15 years and currently lives in San Antonio with her husband and two beautiful daughters.

The first year Roots found themselves sitting at the bottom of the USL table, winning only one game in their first twelve with a record of 1 – 8 – 3 before signing Amarikwa.

Upon signing Amarikwa, VP of Soccer Eric Yamaoto shared, “We are excited to add Quincy to the Roots Family,”…“Not only is he a dynamic player with great experience, but his veteran presence in our locker room will continue to push the development of our young Club.”

With 3 months left in the regular season Amarikwa was a catalyst in helping to establish a positive locker room culture and helped to raise the Roots record to 11 – 13 – 8 while playing both the striker and winger positions.

Amarikwa then started and played 120 minutes on the road in a double overtime draw in the second round of playoffs to Orange County. Losing in a penalty shootout 6-5 to who became the eventual USL Cup Champions.

While playing for the Roots, Amarikwa was also involved in leading a number of philanthropic endeavors as Founder of Black Players For Change.

Featuring at the MLS All-Star game as a panelist for the first Barbershop Forum | Wealth & Equity – Building Bridges To Prosperity. 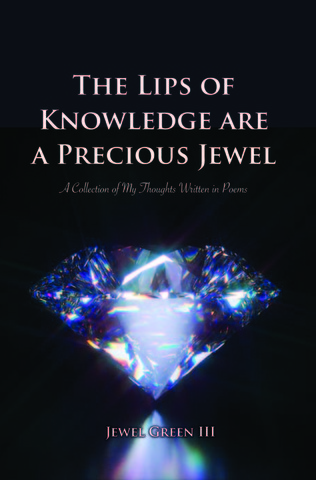 The Lips of Knowledge are a Precious Jewel: A Collection of My Thoughts Written in Poems, a new book by Jewel Green III, has been released by Dorrance Publishing Co., Inc.

This compilation of poetry seeks to speak the truth about America and what’s taken place in the life of the black man. It speaks to a nation standing at the crossroads of hate and indifference to people of color. Green hopes that readers feel the power and presence of God in the world despite our difficulties.

Jewel Green III is a former U.S. Marine, who graduated from a theological seminary in the Midwest and started inner-city outreach ministries in south Chicago. He is married with three grown children. Green’s hobbies include writing and following all sorts of sports. After the pandemic, he hopes to be back to spreading the gospel out in the community.

The Lips of Knowledge are a Precious Jewel: A Collection of My Thoughts Written in Poems is a 80-page paperback with a retail price of $11.00 (eBook $6.00). The ISBN is 978-1-6386-7014-8. It was published by Dorrance Publishing Co., Inc of Pittsburgh, Pennsylvania. For members of the press, to request a review copy, visit our virtual pressroom at http://dorrancepressroom.com or to buy the book visit our online bookstore at https://bookstore.dorrancepublishing.com/the-lips-of-knowledge-are-a-precious-jewel/