We are delighted that the FIFA U-17 Womens World Cup is returning after a four-year hiatus caused by the COVID-19 pandemic. We are really looking forward to this important competition in India taking place in October. For the match officials, of course, its another big stage in the preparation of the potential candidates for the FIFA Womens World Cup Australia & New Zealand 2023, said the chairman of the FIFAs Referees Committee, Pierluigi Collina.

As already mentioned on several occasions and following appointments of referees for other FIFA competitions, weve always worked aiming for uniformity and consistency in decision-making. We are convinced that the appointed match officials can gain useful experience with a view to the biggest womens football competition in the world, the FIFA Womens World Cup Australia & New Zealand next year, he added.

The FIFA U-17 Womens World Cup will give us important and significant insights into the qualities of the match officials who have been appointed. We are very happy that, also for the first time, VAR technology will be used at a FIFA U-17 Womens World Cup. This event will be another great opportunity to showcase the skills of the appointed VARs and continue the development of our female VARs as part of the Road to Australia/New Zealand 2023 project, said FIFAs Head of Refereeing, Women, Kari Seitz.

The FIFA U-17 Womens World Cup India 2022 will take place in Bhubaneswar, Goa and Navi Mumbai.

The competition will be played between 11 and 30 October 2022, with the D Y Patil Stadium in Navi Mumbai hosting the final.

The Directorate of Goods and Service Tax Intelligence, Ghaziabad Regional Unit has busted a syndicate involved in creating and controlling fake firms and issuing of bills by these fake firms without supply any Goods or Services and encashment of GST refund. Further, in-depth investigation was conducted which revealed that the data of this network is being compiled and used from the cloud. After analysis of the evidences and data, it was revealed that this network consists of 275 bogus firms which exist only on paper. These firms have issued fake invoices having total value of Rs 3,189 crore involving total GST evasion of Rs 362 crore. 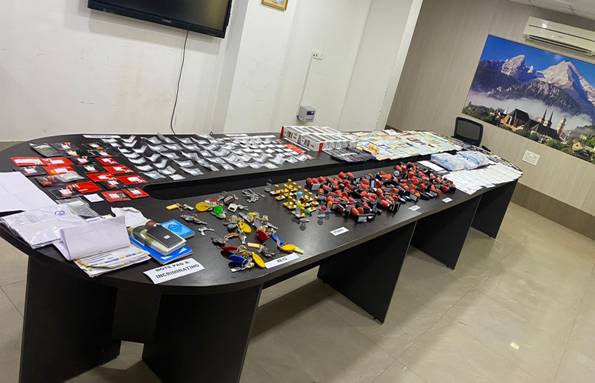 One of the key persons who was instrumental in collection of identities of individuals for creation of fake firms namely Sh. Tinku Yadav was arrested earlier. Based on the information given by Sh. Tinku Yadav  and analysis of IP addresses, the actual masterminds of the network namely Sh. Vipin Kumar Gupta alias Nikku, and Sh. Yogesh Mittal have been apprehended and arrested. It has been learnt that both Sh. Vipin Kumar Gupta and Shri Yogesh Mittal are habitual offenders. Both the offenders have been arrested by Directorate of Revenue Intelligence (DRI) and Enforcement Directorate (ED) earlier.

Prime Minister Shri Narendra Modi interacted with PMO officials on the occasion of ‘Diwali Milan’, organised at PM’s residence at Lok Kalyan Marg today. He extended warm Diwali greetings to everyone on the occasion.

Prime Minister discussed the country’s battle against the pandemic. He underlined how the country has displayed unity and brotherhood in fighting the common faceless enemy. He also talked about the positive changes that have come about in society and governance as a result of the pandemic, adding that these changes have made societies more resilient.

Prime Minister highlighted how difficult times often lead to realization of inherent potential among people, processes and institutions. He exhorted PMO officials to draw inspiration from this spirit.

Highlighting the significance of this decade towards laying a strong foundation for the nation for 2047 and beyond, Prime Minister said that all of us in PMO must work together to our fullest potential and help the nation attain greater heights.

Based upon specific intelligence, the officers of the Anti Evasion branch of Central Goods and Service Tax (CGST) Commissionerate, Delhi (West) have unearthed a case of availment/utilization and passing on of inadmissible input tax credit (ITC) through goods less invoices of Rs 91 crore (approx). The modus operandi involved floating of multiple firms with the intent to avail/utilize & passing on of inadmissible credit.

The firms involved in this network are M/s Girdhar Enterprises, M/s Arun Sales, M/s Akshay Traders, M/s Shree Padmavati Enterprises and 19 others. These 23 firms were floated in order to generate goods-less invoices with an intent to pass on fraudulent ITC without paying actual GST to the government. Late Shri Dinesh Gupta, Shri Shubham Gupta, Shri Vinod Jain and Shri Yogesh Goel were associated in the said business of generating/selling fake invoices. These entities are dealing in various commodities and involved in generation of goods-less invoices worth Rs. 551 croreand passing inadmissible ITC amounting to Rs. 91crore(approx.). All the three accused tendered their voluntary statement admitting their guilt.

Therefore, Shri Shubham Gupta, Shri Vinod Jain and Shri Yogesh Goel knowingly committed offences under Section 132(1)(b) and 132(1)(c) of the CGST Act, 2017 which are cognizable and non-bailable offences as per the provisions of Section 132(5) and are punishable under clause (i) of the sub section (1) of Section 132 of the Act ibid. Accordingly, they were arrested under Section 132 of the CGST Act on 10.07.2021 and remanded to judicial custody by the duty Metropolitan Magistrate for 14 days. Further Investigations are in progress.

Delhi Zone has been making sustained efforts to check evasion of GST, leading to detection of Rs. 91.256 crore in the present FY and 3 persons have been arrested in these matters.

The officers of CGST Delhi North Commissionerate upon data analysis and gathering of intelligence zeroed in on Shri Krishan Kumar who was involved in creating and operating fake firms using identification documents of his friends/employees.

As per investigation conducted so far, a total of 5 fake firms namely M/s Shradha Traders, M/s Anshara Impex, M/s Vijeta Enterprises, M/s SM Agencies and M/s Deepasha Sales were created by him for the issuance of goods-less invoices for items like butter/ghee/oil and passed on inadmissible Input Tax Credit (ITC) of Rs. 94 crore approx.

During the search of his residence incriminating documents like ATM cards, signed cheques, bank documents, stamps of these dummy firms including stamp of the transport company as mentioned in the e-way bills of the fake firms and outer packets/cases of SIM cards of mobile phones used for registration of firms were recovered.

In view of the above Shri Krishan Kumar has thus committed offence specified under Section 132(1)(b) of the CGST Act, 2017. Accordingly, he has been arrested on 25.03.2021 under the provisions of the Section 69(1) of the CGST Act, 2017. He was sent to 14 days judicial custody by the duty Magistrate. Further investigation is under process.

It is pertinent to mention here that in the financial year 2020-21, CGST Delhi Zone has made total of 40 arrests in various cases involving GST evasion amounting to Rs. 5,310 crore.