The cess on petrol and high- speed diesel, collected as per the provision of the CRIF Act, 2000 amended by the Finance Act, 2019 is earmarked for various Infrastructure Sectors inter alia including Water and Sanitation. Jal Jeevan Mission, a centrally sponsored scheme for making provision of potable tap water supply to every rural household by 2024, is being funded through Central Road & Infrastructure Fund (CRIF) and as informed by Ministry of Finance on 21.07.2022, the details of collection of cess and corresponding budgetary support for the mission in last two years and current year is as under:

This information was given by the Minister of State, Shri Prahlad Singh Patel in a written reply in Rajya Sabha today.

Sewerage system does not exist in rural areas of the country.  Under Swachh Bharat Mission (Grameen), for disposal of human excreta, use of safe and eco-friendly onsite sanitation technologies such as twin leach pit toilets is encouraged for most parts of the country.  Under this technology, human faeces automatically become manure in 1-2 years.  In case of septic tank and single leach pit toilets, it is advised to retrofit them by converting the single pits to twin pits and connecting septic tank with soak pits.  For treatment of faecal sludge from the septic tanks and single pit toilets, SBM (G) guideline provide for mechanical emptying of the pits and transportation of faecal sludge to nearby Sewage Treatment Plant (STP) / Faecal Sludge Treatment Plant (FSTP) in urban/rural area.  Funding provision at the rate of Rs.230 per capita is available under SBM (G) for setting up of FSTP in rural areas.

This information was given by the Minister of State, Shri Prahlad Singh Patel in a written reply in Rajya Sabha today.

.This information was given by Minister of Development of North Eastern Region Shri G. Kishan Reddy in a written reply in Lok Sabha today.

Department of Drinking Water and Sanitation (DDWS) has conducted periodic surveys to ascertain the ground situation of sanitation in rural areas.  It has conducted three rounds of National Annual Rural Sanitation Survey (NARSS) from 2017-18 to 2019-20 through an independent verification agency. Each round of NARSS covered 92,040 households in 6136 villages across States and UTs of India.  DDWS has also conducted two rounds of Swachh Survekshan Grameen (SSG) in 2018 and 2019 to rank States and districts based on their performance on key quantitative and qualitative sanitation parameters.  As per the results of NARSS 2019-20, State/UT-wise details of percentage of population who were having access to toilet, percentage of villages which were sustaining ODF status and percentage of population having some arrangements for solid and liquid waste management (SLWM), are given at Annexure-1.

State Governments project their annual requirement of funds in their Annual Implementation Plans (AIP) consolidating the requirements for all the districts in the State. The same are considered and approved by the National Scheme Sanctioning Committee of the SBM(G).  The State/UT-wise details of projected requirement of funds submitted by the State Governments during the last three years are given at Annexure-2.  And, the State/UT-wise and year-wise details of funds released during the said period are given at Annexure-3.

This Information was given by the Minister of State for Jal Shakti, Shri Prahlad Singh Patel in a written  reply in Lok Sabha today.

*Under 15th Finance Commission (FC), tied grants for sanitation are being provided to Rural Local Bodies since 2020-21 onwards. 15th FC is not applicable to UTs.

* Under 15th Finance Commission (FC), tied grants for sanitation are being provided to Rural Local Bodies since 2020-21 onwards.  15th FC is not applicable to UTs.

Industry leaders from across 30 major sectors participated in job fairs organised across the length and breadth of the country over a period of seven days between 17th – 23rd December, 2021, as part of the Azadi ka Amrit Mahotsav Campaign. These job fairs, organised under the Deen Dayal Upadhyaya Grameen Kaushalya Yojana (DDU-GKY) programme by the Ministry of Rural Development, were facilitated by various State Rural Livelihood Missions (SRLM) and Project Implementation Agencies (PIA). 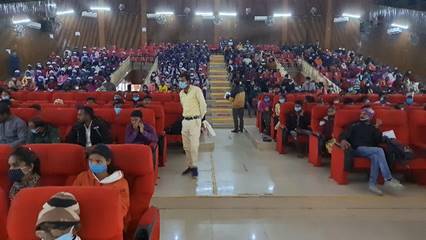 The program is currently being implemented in 27 States and 4 UTs and has over 2369 Training Centres in 1891 projects, in partnership with over 877 Project Implementing Agencies conducting training across 57 sectors, and over 616 job-roles. A total of 11.15 lakh candidates have been trained and 7.13 lakh candidates trained since inception under the DDU-GKY programme. 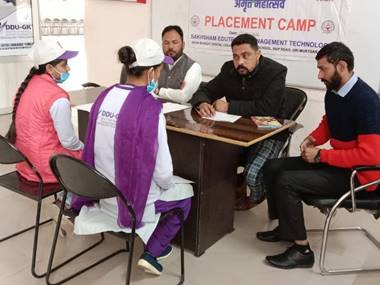 Lakhs of job seekers, both trained under the DDU-GKY programme and otherwise, participated in the job fairs. Close to 285 such fairs were organised across the country with participation from about 278 plus organisations. Some of the participating companies include Amazon India, Swiggy, Med Plus, Axis Bank, Kia Motors, Innovsource, Flipkart, Nana Bharat Fertilizers, Reliance Trends, Westside, Spencers, Leela Hotel, JW Mariott, Bengaluru, Teamlease Services etc. to name a few.

The participating organisations belonged to 30 major sectors/trades including retail, construction, pharmaceutical, manufacturing, e-commerce, microfinance, manpower management, IT-ITEs, automobile etc. The job melas were a huge success with thousands of rural youths being provided opportunities to work with some of the most prominent companies of the country. 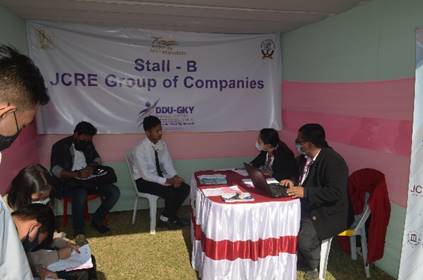 Job seekers in the age groups of 18-35 years having completed basic schooling between 5th-10th standards and senior secondary or ITI, were provided free counselling at the venues. Eligible candidates were also selected for prior training in various trades with direct employment post trainings. Participating companies were also advised to ensure proper food and stay facilities for candidates selected for employment outside their home states.