The Parade was reviewed by Air Marshal Balabhadra Radha Krishna, Chief of Integrated Defence Staff to the Chairman of the Chiefs of Staff Committee (CISC) who awarded medals to meritorious Midshipmen and Cadets on completion of the Ceremonial Review. Vice Admiral Puneet K Bahl, Commandant, Indian Naval Academy was the Conducting Officer.

The ‘President’s Gold Medal’ for the Indian Naval Academy BTech Course was awarded to Midshipman Anivesh Singh Parihar. The other medal winners were as follows:

The successful trainees marched with their gleaming swords and rifles held in salute, past the Academy’s Quarterdeck, in Slow March, to the traditional notes of ‘Auld Lang Syne’ – the poignant farewell tune played by armed forces around the world when bidding adieu to colleagues and comrades, for their ‘Antim Pag’ or final step at the Indian Naval Academy.

Air Marshal Balabhadra Radha Krishna congratulated the trainees on parade for their impeccable turnout, smart drill and movements on parade. The Reviewing Officer emphasised on the core values of duty, honour and courage. The Reviewing Officer and other dignitaries shipped the stripes of passing out trainees and congratulated them for their successful completion of the rigorous training. These officers will proceed to various Naval ships and establishments to further consolidate their training in specialised fields. 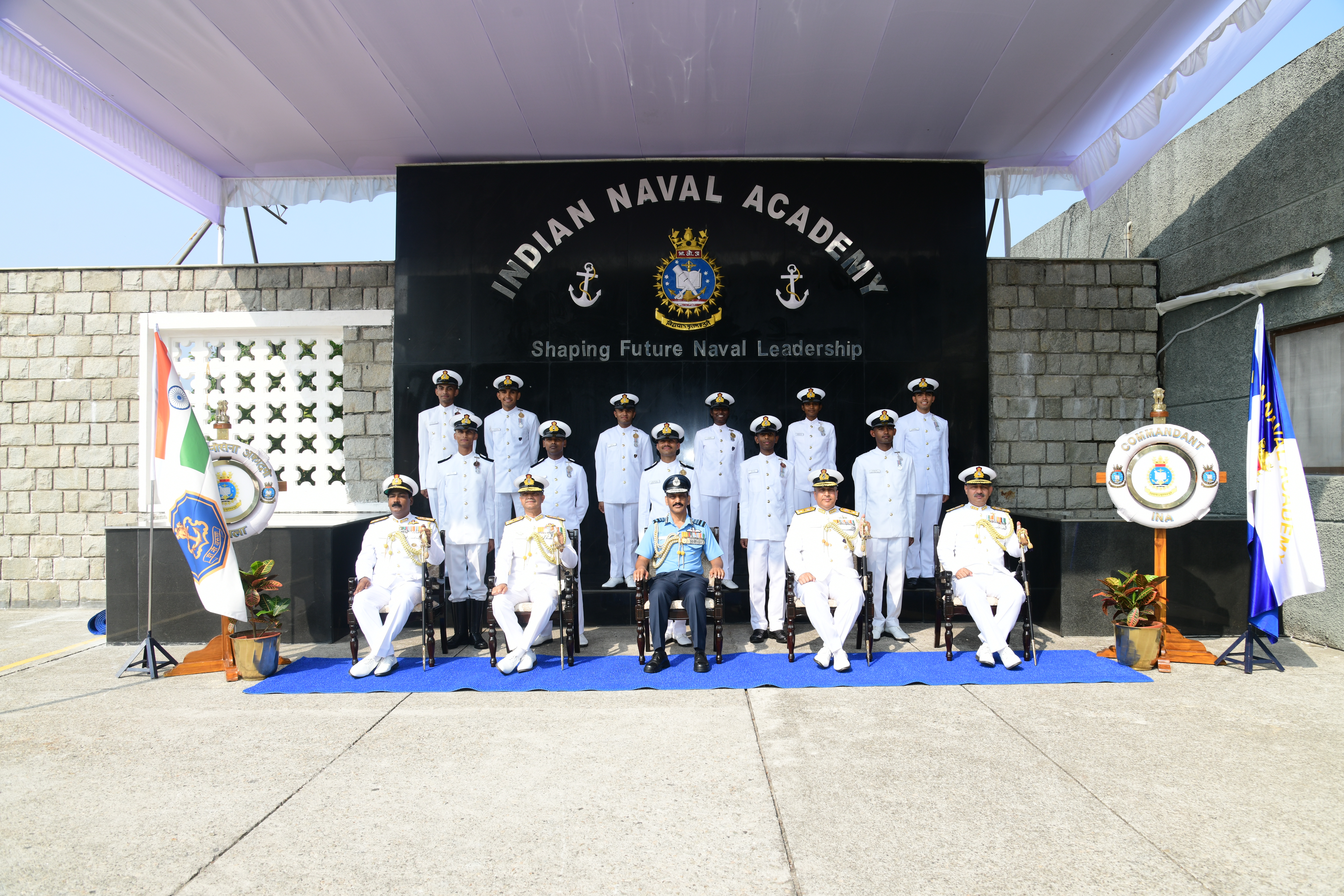 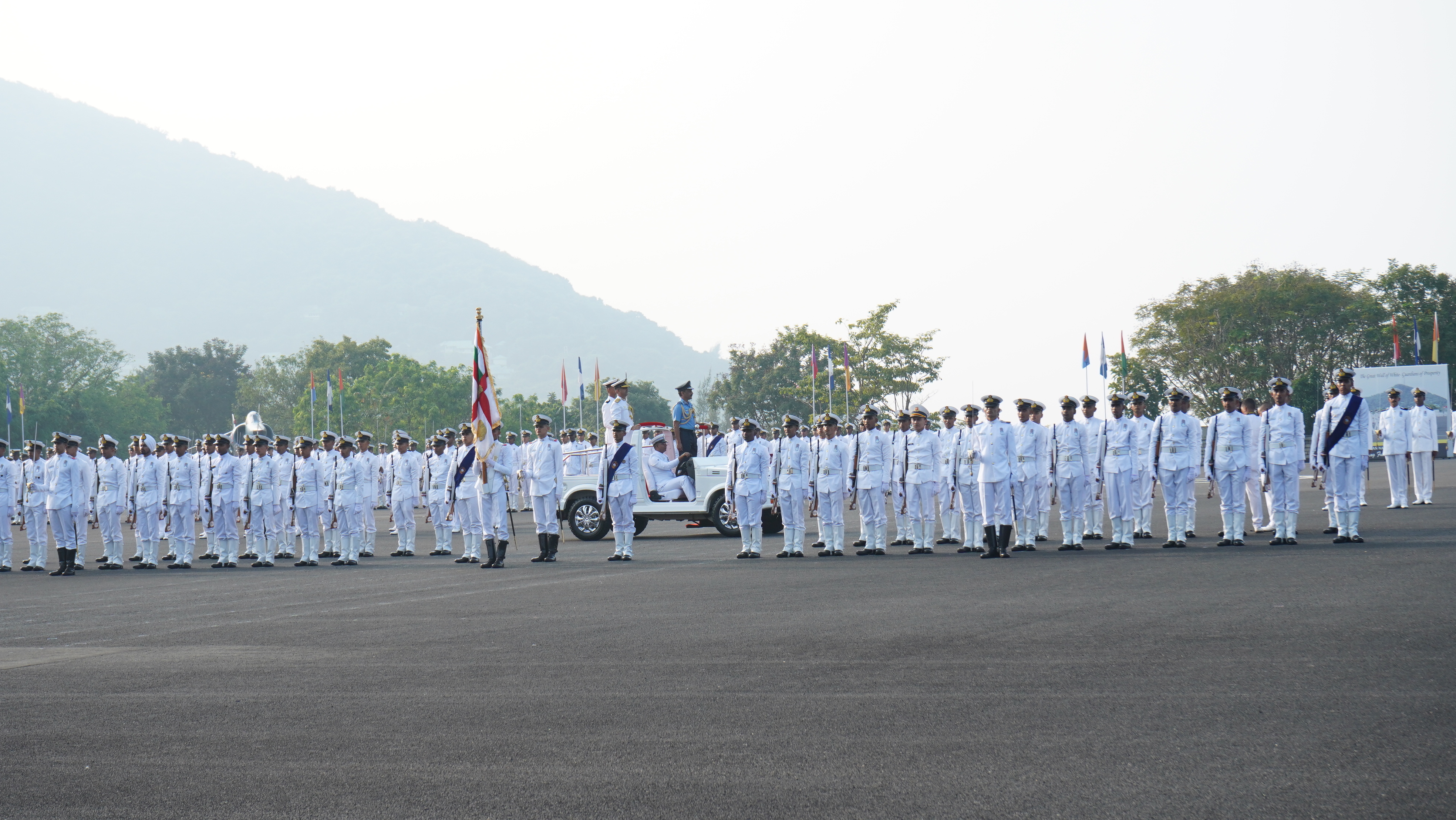 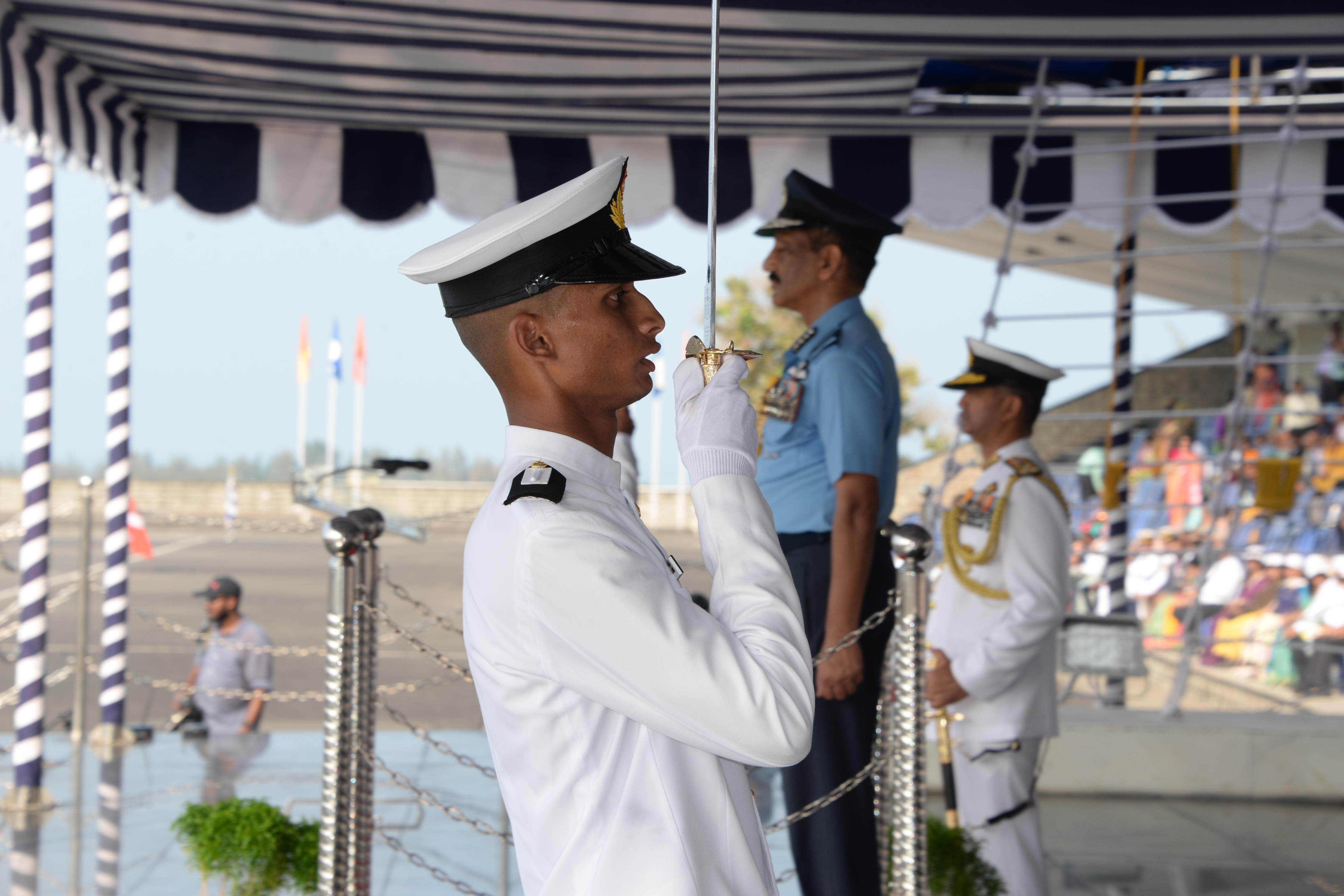 
Parade of Homes® is coming to Magnolia Green 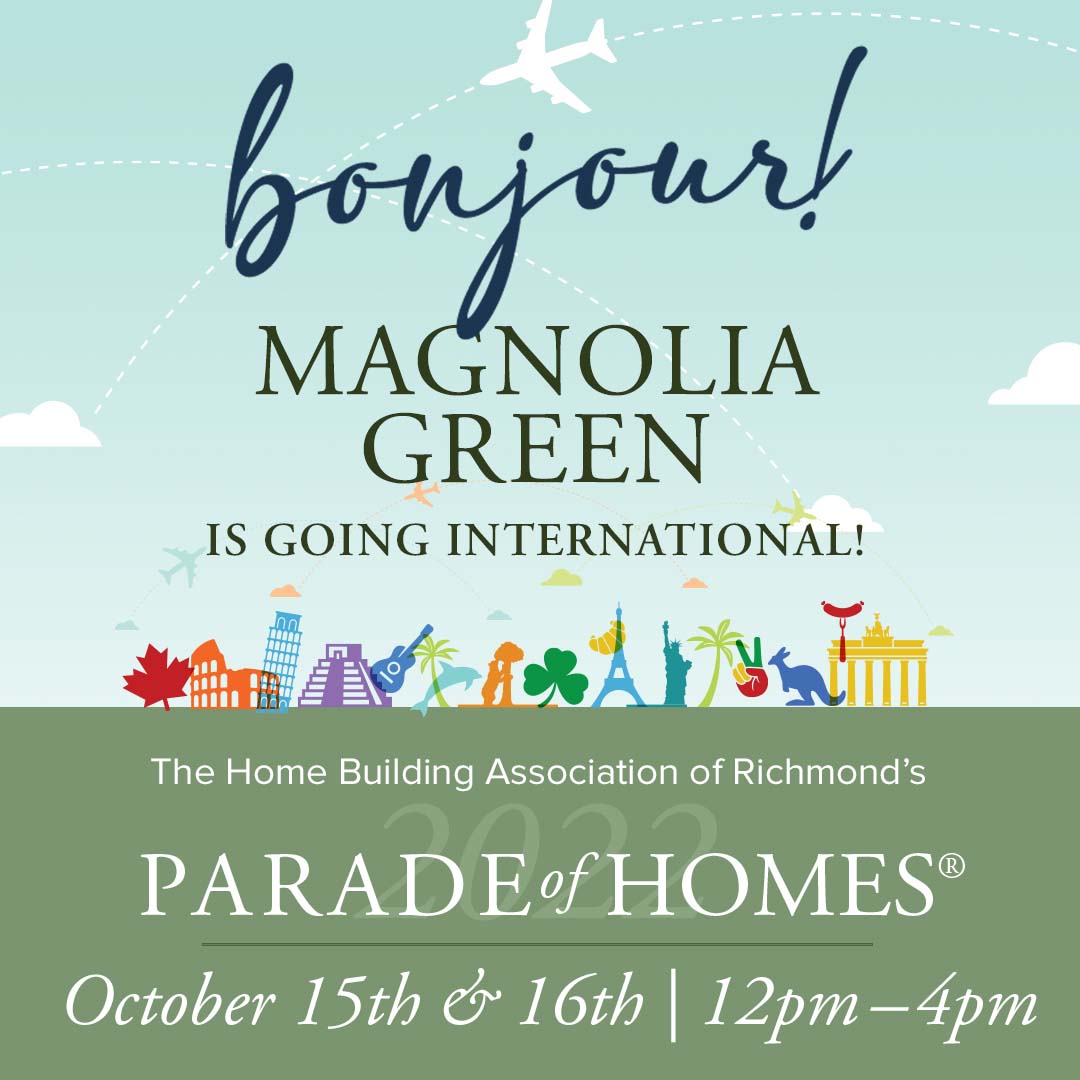 Parade of Homes is coming to Magnolia Green.

CHESTERFIELD, Va. – Sept. 29, 2022 – PRLog — On the heels of an event-filled, action-packed summer, Magnolia Green in Chesterfield County is excited to announce that it will be the weekend sponsor for The Home Building Association of Richmond’s Parade of Homes® on October 15th and 16th from 12pm to 4pm daily. This event is free and open to all. Attendees will have the opportunity to visit Magnolia Green, see a variety of beautiful new model homes and its state-of-the-art amenities while participating in a curated adventure.

The event will feature a “Go International” theme, and each model home and amenity stop will represent a country. Participants will receive a passport that will be stamped at each stop. Those who visit all stops will get entered to win a $500 VISA gift card.

The parade will include live music by Damian Allen and Jocelyn Oldham, Jonathan the Juggler, trolley rides, face painting, food trucks and beverages for purchase courtesy of Tipsy Grape Mobile Bar. These festivities will take place at the Magnolia Green Aquatic Center.

The fun kicks off at the Aquatic Center where attendees will receive a passport and tour map. “This family-friendly event will also offer visual scavenger hunts in each home for children to participate in,” said Michelle Atkins, Marketing Manager of Magnolia Green.

The Parade of Homes will follow one of Magnolia Green’s most memorable summers yet.

The Magnolia Green Sea Dragons (Magnolia Green’s summer league swim team) finished its 2022 season undefeated. “The goal of the team is to provide a quality recreational swimming program for the residents of Magnolia Green,” said Beth Miller, Swim Team President. “The team strives to show great sportsmanship, enthusiasm, teamwork and the dedication to better themselves in the sport of swimming.”

Magnolia Green also hosted a variety of tennis and golf camps. “These camps were an exciting way for our youth to experience various sports during the summer months,” said Kelley Glen, Director of Tennis.

In July, Magnolia Green was excited to welcome Moseley Elementary School to the Chesterfield Community at its ribbon cutting ceremony. Home of the Mustangs, the school officially welcomed its first students (grades K-5) on August 22.

The Market at Magnolia Green has also been in full swing since May. The popular farmers market is open to the public and takes place every Saturday through October 22 from 9am to 1pm (rain or shine) at 17320 Hull Street Road. The market will close out the season by hosting its annual Young Entrepreneur Day on October 22 from 9am to 12pm.

“We love to support young entrepreneurs each year,” said Atkins. “We can’t wait to see the variety of handmade/homemade product offerings from all of the talented kids.”

Internationally known fashion designer Calvin Thoo, famed for his passion for fine fabrics and intricate embroidery of modern baju kurung, and celebrated for his specialisation in traditional clothing and cuttings, showcased his special lines reminding the audience of the spirit of Merdeka.

He said, “My inspiration for today’s line is the independent expression of tradition meeting the 21st century, captivated yet, reminiscent of bygone days.” Thoo has participated in fashion shows in Paris, Australia, China, Thailand and Indonesia and has designed for the Royal Families of Pahang, Terengganu, Kelantan, Johor and Perlis. His self-named boutique is located in Kuala Lumpur on Jalan Imbi.

Celebrities including Ifa Raziah, Yasmin Hani, Dynas Mokhtar and Suki Low, were also present with their booths of locally made merchandise at the bazaar. Other booths with interesting merchandise include Moore Authentics, Pretty Suci and Inner Sejuk.

Commenting on the weekend event, Johari said, “As the sponsor and a proud Malaysian, Subang Parade is honoured to present Merdeka Fiesta and today’s Batik, Tenun and Songket Fashion Show. We take great pride in showcasing our culture and the best of Malaysia. We are looking forward to collaborating with local talents to present more unforgettable fashion experiences in the coming months and making our malls vibrant again with exciting activities and events to welcome shoppers.”

The Subang Parade Merdeka Fiesta from 27 August to 31 August 2022 has activities lined up, including fashion shows, performances by local celebrities, a bazaar featuring locally made and produced merchandise, local cuisine cooking demonstrations, hobby demonstrations and a petting zoo to bring families, neighbours and friends together.

A host of family-friendly activities is being rolled out by Subang Parade, a mall owned by Hektar Real Estate Investment Trust (Hektar REIT), taking inspiration from the theme for the country’s National Day, “Keluarga Malaysia Teguh Bersama”, or “Malaysian Family, Strong Together” while supporting local culture and designers.
Aptly named Subang Parade Merdeka Fiesta, held over 27-28 August and on 31 August 2022, the activities include fashion shows celebrating Malaysia’s rich Batik, Tenun and Songket traditions and showcasing homegrown talents as well as a bazaar featuring locally made and produced merchandise, local cuisine cooking demonstrations, hobby demonstrations and even a petting zoo to bring families, neighbours and friends together.

The launch of Subang Parade’s one-of-a-kind fashion show on 27 August will feature designers such as Calvin Thoo who is known for his specialization in traditional fabrics.

Puan Aldela Puspa bin Nordin, CEO of Hektar Property Services Sdn Bhd, the property manager of Subang Parade said, “Merdeka Fiesta is put together to bring awareness among Malaysians of the rich heritage and common interests, values and history of the country, helping to build a firm foundation for the future. The Batik, Tenun and Songket fashion show as well as the display of mostly locally produced merchandise will be a good showcase of all things Malaysian.”

Calvin Thoo explained, “Batik is Malaysia. The intricate art of making quality Malaysian batik fabric and tenun weaving remains a traditional process and the skills that are being passed on from generation to generation in family businesses and in associations must be preserved. Batik fabrics has been adopted over the generations from the Malays by the different ethnic groups in Malaysia’s multicultural society.”

Over the three days of the Subang Parade Merdeka Fiesta, there will also be a pet adoption campaign alongside a petting zoo. There will also be tutorials and demonstrations of, among others, makeup and terrarium building. For hijabistas, there are tutorials happening on 28 and 31 August.

Dato’ Zamzani Abdul Wahab, popularly known as ‘Chef Zam’, a popular Malaysian celebrity chef, will be showcasing his culinary expertise on 31 August 2022 through several cooking demonstrations. There will also be performances by widely known artistes.

Chief Executive Officer of Hektar Asset Management Sdn. Bhd., En. Johari Shukri bin Jamil said, “We are extremely grateful and excited to be able to gather together and share happy experiences in Subang Parade, which is also the first regional mall to open in Selangor in 1988. The Merdeka Fiesta showcases our Malaysian culture and roots that we want to not just uphold but share with the rest of the world. These includes not just our culinary traditions but also our fashion and art as can be seen from the batik and songket designs presented here.”

“Subang Parade has been the centre for families and workers in the surrounding neighbourhoods for more than 30 years. Since then, the mall has undergone several enhancements and refurbishments to ensure that it remains on top of market trends while catering to our target market. We want to remain a premier gathering place for families and friends in the Klang Valley and we will continue to upgrade facilities as well as introduce new retail brands and services to ensure that they get as much as possible out of their visit to the mall.”

Subang Parade hopes to welcome everyone in a safe manner and would like all visitors to continue adhering to social distancing and having masks on at all times.

In her speech, Mrs Carrie Lam said despite the many challenges over the years, the ImmD remained dauntless and forged ahead bravely, tiding over one difficulty after another with positive attitude and professionalism. She also commended the ImmD for its remarkable achievements in the past six decades, repeatedly winning great acclaim from citizens and visitors. For instance, the Next Generation Electronic Passport System was given the Award of the Year at the Hong Kong ICT Awards 2021 in recognition of the ImmD’s efforts and contributions in harnessing information technology to provide quality public service experience for the community.

She also appreciated the ImmD’s incorporation of an element of youth engagement in the parade, which reflected its active role in promoting youth training and its dedication to nurturing new blood who had positive energy and had aspirations for serving the community and to ensure passing on the baton to the new generation.

Lastly, Mrs Carrie Lam called on passing-out officers to stay true to their original aspirations and founding mission, ride out difficulties, and serve Hong Kong and contribute to the motherland with all their efforts. She hoped that the ImmD would continue to uphold the principles of putting people first and striving for excellence, and make sustained efforts to expand its scope of services and enhance the existing services in support of the sustainable development of the country as well as Hong Kong.