The Ministry of Road Transport and Highways has issued the Motor Vehicles Non Transport Vehicles Visiting India Rules, 2022 vide notification GSR 680(E) dated 02.09.2022. These rules formalize the movement of Non-Transport (Personal) vehicles registered in other countries when entering or plying in the territory of India.

The following documents shall be carried in the vehicle(s) operating under these rules during the duration of stay in the country, namely:–

(iv)       A valid pollution under control certificate (if applicable in the origin country);

In case the documents referred above are in a language other than English, then an authorized English translation, duly authenticated by the issuing authority, shall be carried along with the original documents.

Motor vehicles registered in any country other than India shall not be permitted to transport local passengers and goods within the territory of India.

Motor vehicles registered in any country other than India shall be required to comply with rules and regulations made under Motor Vehicles Act, 1988 of India.

Ministry of Road Transport and Highways has notified G.S.R. 889(E) dated 16th September, 2016, for use of Hydrogen as an automotive fuel in the country. The specifications for Hydrogen for Internal Combustion Engine have been specified in Annexure IV-W of the said notification. 18% blend of Hydrogen with CNG

This information was given by Union Minister for Road Transport and Highways, Shri Nitin Gadkari in a written reply in the Rajya Sabha.


All vehicles in the country should run on 100% ethanol: Nitin Gadkari

All vehicles in the country should run on 100% ethanol: Nitin Gadkari

Union Road Transport and Highway Minister Shri Nitin Gadkari inaugurated National Highway projects totalling a length of 527 km, worth Rs 4,075 crore at Ahmednagar district in Maharashtra today. Bhumipoojan and dedication of these projects to the nation was held in a programme organized at Kedgaon in Ahmednagar by the National Highways Authority of India (NHAI).

Shri Gadkari said, water, electricity, transportation and communication are important aspects for development of the country. In order to eradicate poverty, hunger and unemployment in the country as well as for the welfare of the villagers, poor, labourers and farmers, more employment should be created in these sectors, he added.

Speaking on the occasion, Shri Gadkari threw light on the importance of converting sugar into ethanol. He said that ethanol production could save the country’s fuel. There is a need to run vehicles on electricity and ethanol on the lines of Brazil, he stated. “Our country produced 4.65 billion litres of ethanol last year and we need 16.5 billion litres of ethanol. So the Central Government will take up as much ethanol as is produced,” he said. “Ethanol is a better and cheaper green fuel than petrol. All vehicles in the country should run on 100% ethanol,” stated Shri Gadkari.

“We are importing crude oil and natural  gas worth Rs 12 lakh crores in our country. The Government of India has allowed ethanol pumps. So, all sugar mills should start ethanol pumps in their area”, added the Minister. He added that the country needs 240 lakh tonnes of sugar, while last year 310 lakh tonnes of sugar was produced. This additional sugar of 70 lakh tonnes should be converted into ethanol, said the Minister. He also said that the Government of India is ready to enter into an Ethanol Purchase Agreement for five years, like the power purchase agreement. “If ethanol is produced in the near future, imports will come down and farmers will earn Rs 5 lakh crore out of Rs 12 lakh crore being spent for import of crude oil. Sugarcane will fetch good prices and farmers will no longer remain poor,” he said. The Central Government has given permission to produce ethanol not only from sugarcane but also from rice, maize and other grains, informed the Minister. The Minister also stated that the Centre is ready to set up logistics parks, industrial clusters and transport towns wherever land is provided by the state government. He said, development has taken place in Western Maharashtra due to sugar industry and milk production. The 527 Km road developmemt projects in Ahmednagar district will be implemented through the Ministry of Road Transport and Highways, National Highways Authority of India and Public Works Department, Government of Maharashtra. These projects include: 1) Four-laning of Ahmednagar-Karmala-Tembhurni section of NH-516A at an expense of Rs 2,013 crore, Upgradation of Savali Bihar to Ahmednagar Bypass Section of NH-160 at a cost of Rs. 496 crore, Strengthening of Ahmednagar and Bhingar city portion of NH-61 (old NH-222) at a cost of Rs 35 crore, Upgradation of Adhalgaon to Jamkhed section of NH 548D at a cost of Rs. 400 crore and fourteen projects under Central Road Infrastructure Fund worth Rs 85 crore. 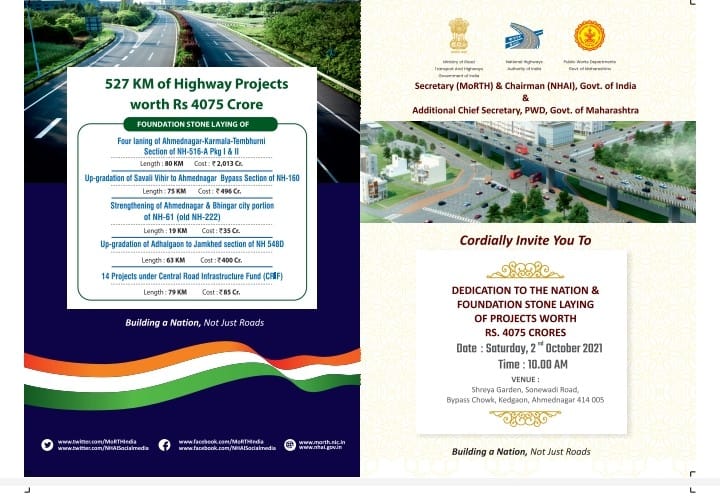 CIMC Vehicles is Officially Listed on the ChiNext Board of China

CIMC Vehicles (Group) Co., Ltd. (“CIMC Vehicles” or the “Group”, stock code: 1839.HK/301039.SZ) announces that it has been officially listed on the ChiNext Board of China and achieved “A+H” dual-listing status.
For its listing on the ChiNext Board, CIMC Vehicles issued approximately 253 million shares at an offer price of RMB 6.96 per share. The total funds raised reached RMB 1.758 billion. Funds raised by CIMC Vehicles will continue to be allocated in constructing the “Sophisticated Manufacturing System”, including digitalization, research and development project, “Light Tower Plants” upgrade and construction project and new sales & marketing construction project, as well as repayment of bank borrowings and replenishment of working capital.

Through continuous exploration and development, CIMC Vehicles has formed an operation model based on
“Intercontinental Operation, Local Manufacturing” which is in response to the current globalization conditions. Relying on its competitive advantages in China, the company actively develops intercontinental operation and acquired a number of renowned brands to create significant brand advantages across the globe.

For client resources, with years of operation and experience, the company has formed cooperation with leading transportation companies and leasing companies in Europe and the United States such as JB Hunt, Schneider, Milestone, TIP and DHL. In the business of truck bodies for specialty vehicles in China, the company has established good partnerships with major domestic heavy truck companies such as SAIC. Hongyan, Shaanxi Automobile and FAW Jiefang.

In 2020, the company’s revenue has reached a record high. As the company was still able to achieve high growth rates with such a large income base, the growth of CIMC Vehicles thus be seen.

CIMC Vehicles expects that with the widespread vaccination against COVID-19, the global economy will recover gradually. Meanwhile, the domestic market will continue to benefit from the favourable policies of the new national standard of second-generation of semi-trailers, the promotion of the “new infrastructure construction” and the rapid rise in the demand for cold chain logistics. Therefore, there is high hope on the future performance of the company.

Establishing the “Sophisticated Manufacturing System”, leading the transformation and upgrading of semi-trailers and specialty-vehicles industries

In the era of intellectualization, the transformation and upgrading of traditional manufacturing is a major proposition. For semi-trailer and specialty-vehicles manufacturers, CIMC Vehicles is deeply involved in the vertical field, continuously improving the automation, intelligence, and digitization of manufacturing, and using Internet of Things technology, Mobile Internet technology. Realizing the development of semi-trailer and special-purpose vehicle manufacturing toward intelligent, networked, shared, and energy-saving are the key ways of leading enterprises to maintain their competitiveness in the industry.

As an industry leader and pioneer, CIMC Vehicles has distinct advantages in R&D technology. As of the end of 2020, the company has more than 700 R&D personnel in the worldwide with more than 1,000 registered patents and participated in the formulation and modification of 22 national and industry standards for semi-trailers and special vehicles in China.

Looking forward, the company will build a sophisticated manufacturing system, upgrade the product module, improve the light tower plants, kick off the sales and market transformation and promoting the organizational development as the four key cornerstones to enhance competitiveness as well as continue to strengthen technological investment, and allow technological innovation Become the source of technological upgrading and lead the industry to new heights.

Sophisticated Manufacturing System is the backbone of the modern industrial system and occupies an important position in the “14th Five-Year Plan”. In fact, the process of CIMC Vehicles becoming No. 1 in the world is also a historical epitome of China’s strategic transformation from a “manufacturing country of quantity ” to a ” powerful manufacturing country of quality”. In the future, CIMC Vehicles will fully utilize the A-share capital platform to lead the industry to a new horizon.