Wonderfilled today announced the long awaited GiantLands 1st Edition began shipping nationwide over the Christmas holiday. Deliveries first began arriving at customer’s doorsteps in the continental USA on Christmas Eve, and will continue to arrive through the new year worldwide.

“We’re thrilled to be delivering our 1st Edition Boxed of GiantLands over the holiday and at the beginning of a new year to fans worldwide,” said Stephen E. Dinehart, President of Wonderfilled. “Bringing out this three volume set in the spirit of the old school roleplaying game renaissance, with talent that gave us classics like Dungeons & Dragons, Gamma World and more is an exciting way for us to bring magic of the roleplaying game alive in bold new ways for lifelong fans and first-time players.”

Some lucky fans were treated to a knock at the door and an unexpected delivery, chiming in on Twitter one said upon delivery “This shows up on Xmas Eve. It’s a Xmas miracle?” also sharing a picture of his GiantLands boxed set.

“This project began with a dream, to bring an old school roleplaying game to life. Seeing this major step come to fruition brings us one step closer to seeing it manifest,” Dinehart said. “This was an amazing opportunity to collaborate with the game designers and artists that made the favorite games of my youth and to bring back that spirit which seems to be missing from so many contemporary versions of the game type that was born of their hands. Roleplaying games were born in Wisconsin, and with GiantLands we’re bringing them back home.”

You can learn more about GiantLands on the official site. GiantLands 1st Edition is now available for sale for $129.99 and currently only directly from Wonderfilled.

About Wonderfilled
Founded in 2018 in Orlando, Florida, Wonderfilled Inc. is a Wisconsin-based corporation built in the spirit of so many visionaries, committed to creating wonder, inspiring awe and making the world a better place for dreamers and dreaming.

Shipping Minister Sarbananda Sonowal attends Zonal Conference on PM GatiShakti in Gujarat; Says, PM GatiShakti is not only connectivity or integrated effort, it is a huge step to strengthen India taking along all states of the country 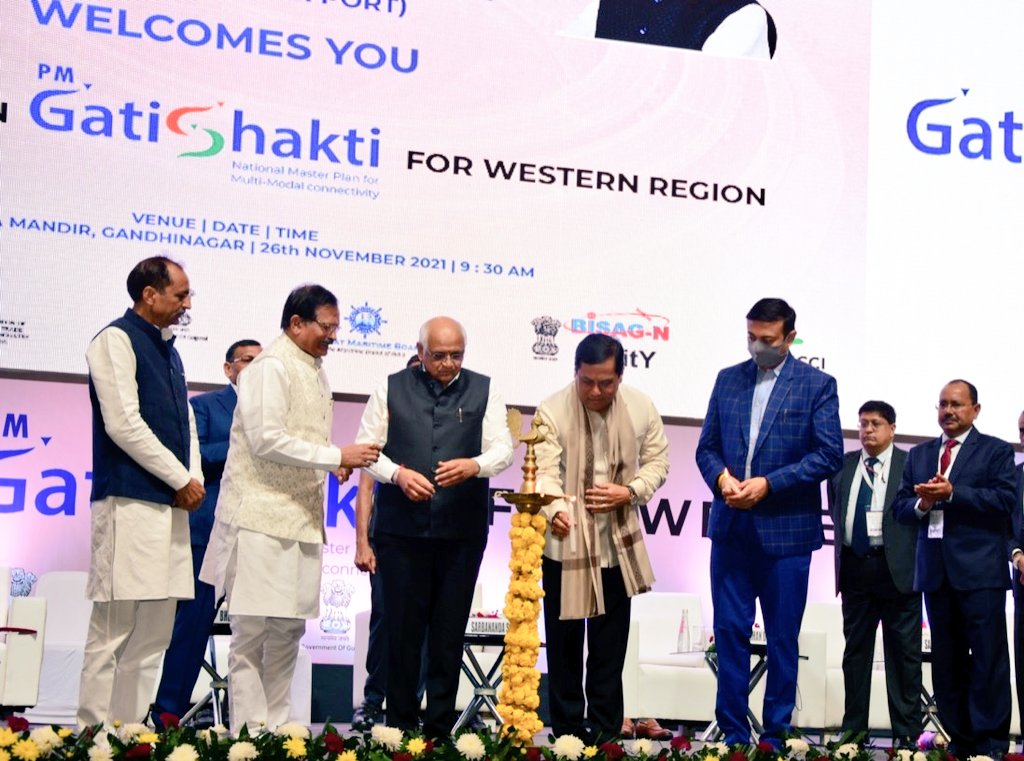 The historic PM GatiShakti – National Master Plan on Multi-Modal Connectivity was launched by Prime Minister Shri Narendra Modi on 13 October, 2021. PM GatiShakti is essentially a digital platform that brings together 16 ministries and institutionalises holistic planning and coordinated implementation of infrastructure connectivity projects. It will incorporate infrastructure schemes like Bharatmala, Sagarmala and inland waterways, dry/land ports, UDAN, among others. Textile clusters, pharma clusters, defence corridors, electronic parks, industrial corridors, fishing clusters, agri zones and other economic hubs will be covered under PM GatiShakti to improve connectivity and make Indian businesses more competitive. The National Master Plan will boost multi-modal connectivity and provide integrated and seamless connectivity for the movement of people, goods and services from one mode of transport to another. It will facilitate last-mile connectivity of infrastructure, reduce travel time, cut down logistics costs, improve supply chains, and make local goods globally competitive.

Addressing the inaugural session, Union Minister Sarbanada Sonowal spoke on how PM Shri Narendra Modi’s policies are giving India a new identity and taking the nation towards making it one of the best countries in the world. “PM GatiShakti is not only connectivity or integrated effort, it is a huge step to strengthen India taking along all states of the country,” the Union Minister added. “Under the tenure of PM Shri Narendra Modi ji, citizens are witnessing new Parivartan each passing day and seeing Vikas from up close. It is a big achievement,” the Union Minister said. “For the presentation shown at the zonal conference to be realised fully, we have to take it to the Panchayats. Progress will get Gati when every section will be involved and this is possible only by working with the spirit of Team India,” the Union Minister stated. 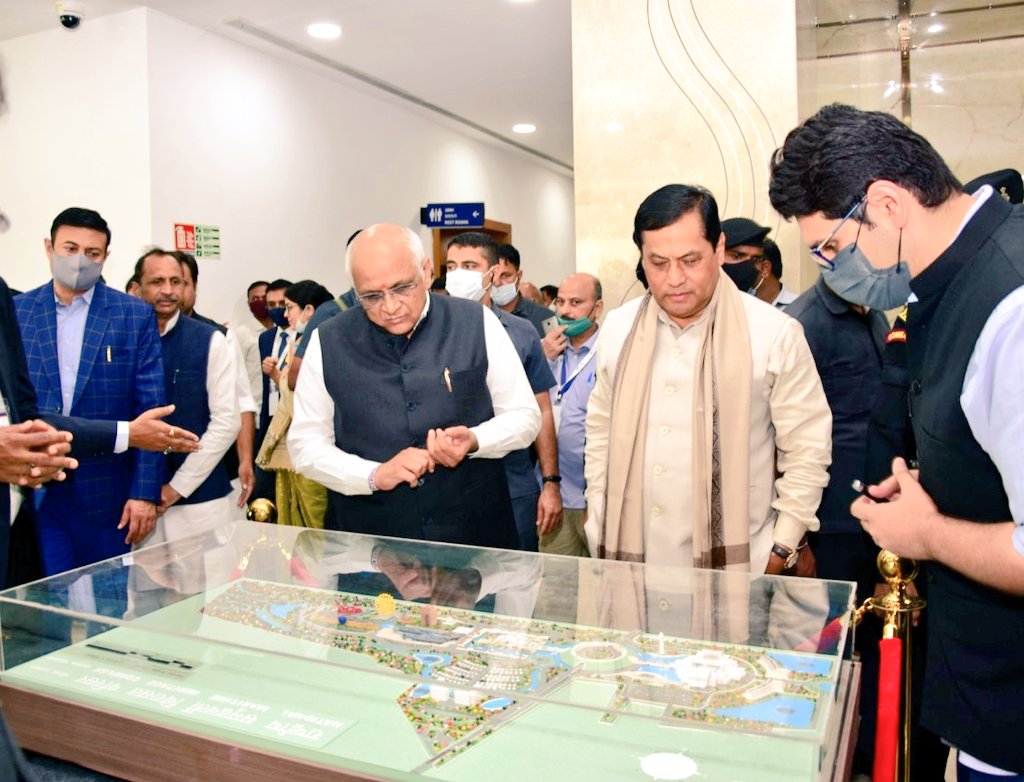 Senior officials from Govt of India, Govt of Gujarat and other Western states like Maharashtra, Goa, Rajasthan and Madhya Pradesh and representatives from industry and academia also participated in the conference.

Union Minister for Ports, Shipping & Waterways and AYUSH, Shri Sarbananda Sonowal today inaugurated the simultaneous launchingof five vesselsat Cochin Shipyard Limited (CSL). The Minister was in Kochi on a threeday visit, his first to the PSU after taking charge of the ministry. The vessels were launched by five senior most women employees of CSL The Minister inaugurated the launching function of three Floating Border Out-Posts (FBOP) for the Border Security Force and two Fully Electric Autonomous Ferries for ASKO Maritime AS, Norway, which are amongst the world’s first Autonomous Ferries. 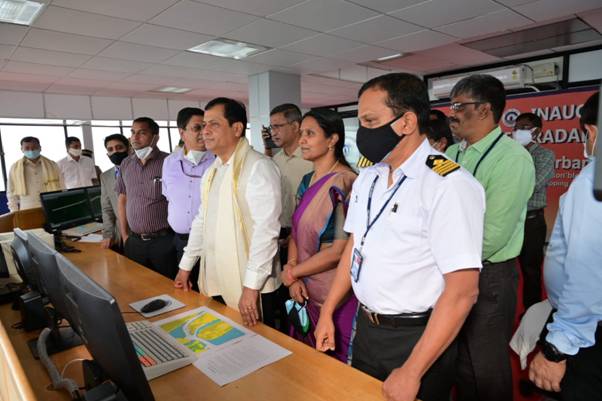 The Minister lauded CSL for its efforts on contributing towards technological and sustainable solutions for the shipping industry. He also appreciated CSL on the construction of the country’s first ever Indigenous Aircraft Carrier (IAC), INS Vikrant which is currently commenced its second sea trials, after a highly successful first sea trial. 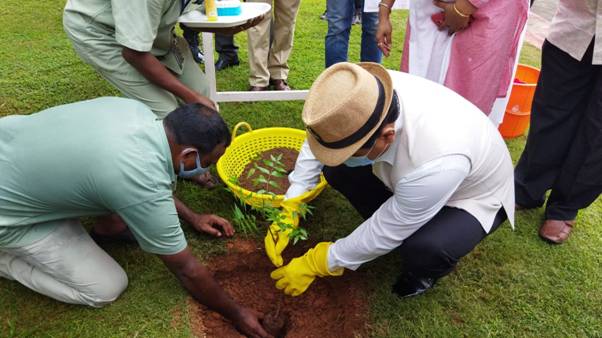 Shri Sonowal boarded the IAC during the course of the sea trials yesterday along with the Chief of Naval Staff, Secretary, MoPSW, Addl. Secretary, MoPSW and CMD-CSL to witness and review the progress made on this crucial and strategic national project. The success of the sea trials of the IAC is a true reflection of our Nation’s quest for ‘Atma Nirbharta’, the Union Minister said. The Minister complemented CSL, Indian Navy, the various OEMs and all the stakeholders involved in the project for this achievement.

The IAC is the largest warship built in the country having a displacement of about 40,000 tonnes. The ship is a mammoth steel structure of 21,500 tonnes of special grade steel developed indigenously and used in Indian Naval Ships for the first time. The enormity of the ship can be gauged from the appx 2000 kms of cabling, 120 kms of piping and the 2300 compartments available onboard. The shipyard carried out the detailed engineering of the ship using advanced software which enabled the designer to get a complete 3D view of the compartments of the ship. It is the first time in the country that a ship of the size of an Aircraft Carrier has been completely modelled in 3D and production drawings are then extracted from the 3D model.

The vessel is powered by four gas turbines in a COGAG (Combined Gas and Gas) propulsion configuration. The IAC is equipped with numerous high end technologies including network centric distributed data processing & control systems, intricate Aviation Facility Complex, the state of the art weapons and sensors and also has one of the most powerful propulsion and power generation & distribution (PGD) systems to be installed on board any ship to be built in India.

Construction of the IAC has contributed immensely to the Indian economy as it generated a demand in both the upstream industries such as steel, electro mechanical machinery equipment and also for downstream sectors such as infrastructure and services. This has led to growth in indigenous design and construction capabilities besides development of large number of ancillary industries, with employment opportunities for 2000 CSL personnel and about 12000 employees in ancillary industries

The Union Government is extending all support to the yard in its endeavours on geographical expansion and capacity enhancement. Through the Maritime India Vision 2030 the Government aims to make India a sought after destination for ship building and ship repair. CSL is a major partner in this endeavour” Union Minister Shri Sarbananda Sonowal said.

The Minister inaugurated ‘Smrithi’, the Ship Model Room at CSL premises, which portrays 50 years of CSL’s rich history. Smrithi exhibits the major vessels built by CSL over the past five decades. A Coffee Table Book based on CSL’shighly recognized CSR initiatives was also released by the Minister.

During the visit, the Minister conducted a review of the yard’s performance and visited the Ship Building and Ship Repair facilities of CSL. The Minister also had a look at the International Ship Repair Facility being set up by CSL at Willingdon Island, Kochi.