I think I cried immediately, Jackson said to TeamUSA.org. Just a big release of emotion. A lot of shock, a lot of relief and a lot of happiness.

With a time of 37.04, Jacksons gold medal performance also marks the first U.S. individual speedskating gold medal since 2010 and the first American woman to win the 500m event since 1994. Coming into the Olympic Winter Games, Jackson was the No. 1 ranked womens 500m skater in the world and won four of the eight world cups this competition season.

Toyota (NYSE:TM) has been a part of the cultural fabric in North America for more than 60 years, and is committed to advancing sustainable, next-generation mobility through our Toyota and Lexus brands, plus our more than 1,800 dealerships.

Toyota directly employs more than 48,000 people in North America who have contributed to the design, engineering, and assembly of nearly 43 million cars and trucks at our 13 manufacturing plants. By 2025, Toyotas 14th plant in North Carolina will begin to manufacture automotive batteries for electrified vehicles.  With the more electrified vehicles on the road than any other automaker, more than a quarter of the companys 2021 North American sales were electrified.

Through the Start Your Impossible campaign, Toyota highlights the way it partners with community, civic, academic and governmental organizations to address our societys most pressing mobility challenges. We believe that when people are free to move, anything is possible. For more information about Toyota, visit www.ToyotaNewsroom.com.

Highlighting the relationship between athletes and supporters, the emotive film demonstrates what can be achieved when we come together.

The Olympic Games are one of the most powerful symbols for unity in the world. Every two years they bring together athletes from around the world in peaceful competition, with the world watching.

Athletes are in their final preparations for the biggest sporting event of their career, the Olympic Winter Games Beijing 2022, which start on 4 February. Celebrating this, the International Olympic Committee (IOC) has today released a new short film highlighting the power of solidarity, which is also reflected in the amended Olympic motto: Faster, Higher, Stronger  Together.

The film, continuing the Stronger Together campaign, spotlights the unique relationship between Olympians and their supporters across the world. People watching around the globe mirror the athletes movements, demonstrating the impact of this human connection. This display of togetherness and the belief of others power people to believe in themselves; to push through that wall, take that leap  to make the unbelievable happen. Demonstrating that through every rise, every fall, every victory, were in it together.

Every rise, every fall, every victory  were in it together is part of the IOCs Stronger Together campaign, which celebrates the power that believing in each other has to bring people together. It joins a story voiced by three-time Olympic medallist Lindsey Vonn, and amplifies the IOCs belief in solidarity and the power of sport and the Olympics to unite people and communities across the globe. The Olympic Winter Games Beijing 2022 take place between 4 and 20 February.

The film is directed by Salomon Ligthelm  a self-taught filmmaker who has won awards for his work across the world  and produced for the IOC in collaboration with Uncommon Creative Studio.

Watch the film now at Olympics.com.

The International Olympic Committee is a not-for-profit, civil, non-governmental, international organisation made up of volunteers which is committed to building a better world through sport. It redistributes more than 90 per cent of its income to the wider sporting movement, which means that every day the equivalent of USD 3.4 million goes to help athletes and sports organisations at all levels around the world

VIDEO: Every rise, every fall, every victory – were in it together 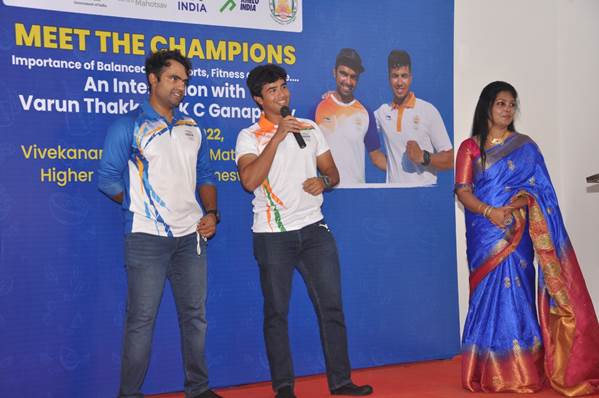 Taking the Hm Prime Minister Shri Narendra Modi’s unique school visit campaign ahead, the Asian Championships Gold Medallists Varun and Gana interacted with children on the importance of having a balanced and nutritious diet to *build strong immunity and muscles that are really important in a life of an athlete*

They also got the students to share their sports resolution for the year 2022 with the audience so they got to hear the experience of upcoming athletes as well. Besides students for the host school, student representatives of 75 schools from 3 districts of Tamil Nadu also attended the special event and got a unique opportunity to meet the local athletes.

During the visit, both Varun and Gana interacted with the students in Tamil and English, so as they understood the importance of having a ‘Santulit Aahaar’ (Balanced Diet), Fitness and also promoted the sport of Badminton, which is quite popular in Southern region of the country.

The duo also showed the students a few basic muscle strengthening exercises which are important to have as a sailor and said ” For sailing, you need to have a balance between flexibility and strength otherwise the wind might suddenly change and throw you off your boats. So every morning we start our day with either running or cycling to build on our flexibility and then in the evening we to weight training, so we can build upon our strength.” Lauding the idea of Hon’ble PM of asking Olympians and Paralympians to visit schools across India and interact with students, Varun and Gana said, ” We are extremely excited to be part of the Meet the Champions Movement initiated by our honourable Prime Minister. It was great to be addressing 75 schools and interacting with 150+ children of various districts. Hopefully, we inspired them and they realise the importance of eating healthy and staying fit. We hope we have a next Olympic medallist from the children and we inspired them to take up sports.”

The unique initiative is part of the government’s ‘Azaadi ka Amrit Mahotsav’ that was kicked off by Olympic Gold medallist Neeraj Chopra in December 2021 and then taken ahead by Olympic Bronze medalist Bajrang Punia in the Northern region of India.

‘Meet the Champions’ initiative is a unique school visit campaign that, is jointly being organized by the Ministry of Education and the Ministry of Youth Affairs and Sports. During their visit, the Olympians share their own experiences, life lessons, tips on how to eat right and also give an overall inspirational boost to school children.

While the sailors met and guided the school going students to keep the momentum of the ‘Meet the Champions’ initiative going, the school management made sure that the school students followed strict COVID appropriate protocols and wore masks at all times during the Olympian’s short visit.

They also made sure that the students sat at least 2 meters away from each other and thus avoided physical contact from kids of other students.

IOC President Thomas Bach said: I got to know Desmond Tutu in 1996 as a passionate lover of the Olympic Games and sport. He always emphasised the power of sport to bring people together. In all the meetings I had with him, he always appreciated the great contribution of the Olympic Games to peace and understanding. It was his fervent wish that he could see the Olympic Games being celebrated in his beloved South Africa.

Bach added: Desmond Tutu was a firm believer in the Olympic values and a man full of humanity and humility, and had a wonderful sense of humour, which made every conversation with him not only inspiring, but also pleasant and unforgettable.

The IOC and the entire Olympic Movement will always honour his memory. Our thoughts are with his wife, his family and his many friends around the globe.

The wrestling kit of four-time Olympic champion Mijaín López Núñez, a basketball jersey from living legend Sue Bird, Swiss tennis star Belinda Bencics Olympic outfit and several pieces of skateboarding equipment are among the 425 new acquisitions made by the IOCs heritage team during 2021, with a rich haul from Tokyo 2020.

Olympians participating at Tokyo 2020 donated more than 100 items to the International Olympic Committee (IOC)s Culture and Heritage collections  all of which will head to The Olympic Museum in Lausanne, Switzerland, and become part of Olympic heritage for posterity.

At each edition of the Olympic Games, the IOCs Culture and Heritage team brings together an emblematic collection of athletes equipment, uniforms, objects and audiovisual documents that will encapsulate the edition for future generations. The collections at Tokyo 2020 covered 28 of the 33 sports, with a special focus on the new sports and disciplines on the Olympic programme, such as surfing, skateboarding and sport climbing, resulting in the acquisition of more than 50 pieces of skateboarding equipment, surfing suits and even parts of the climbing wall. All of these will be showcased in a brand-new exhibition at The Olympic Museum in March 2022.

We have a really exciting new collection to present to the Olympic family and the world, and look forward to displaying some of it in our upcoming Riding the Olympic Wave exhibition, said Yasmin Meichtry, Associate Director of the Olympic Foundation for Culture and Heritage (OFCH), who leads the IOC Culture and Heritage collection. Thanks to a very successful engagement with athletes, International Sports Federations (IFs) and National Olympic Committees (NOCs), we managed to gather 104 donations from 28 disciplines and 34 NOCs at Tokyo. Forty-eight of those were from Olympic champions.

Additionally, fruitful collaboration with the Tokyo 2020 Organising Committee allowed the team to bring back to The Olympic Museum numerous artefacts such as medals, torches and licensed products that will document this edition of the Games in Olympic history. Also part of the heritage collections is the Words of Olympians oral history programme, with a series of interviews that preserve a first-hand account of what it is like to be at the Olympic Games, as well as the socio-cultural context of the editions. In all, 73 Words of Olympians interviews were recorded at Tokyo 2020, with Olympians, IOC members and IF representatives.

Besides securing the proper archiving of the Tokyo Olympic broadcast and its availability for future generations, the OFCH team is also coordinating the production of the Official Film, which will join our legacy collection of more than 100 years of Olympic films, added Meichtry. The Tokyo 2020 Official Film, directed by internationally renowned filmmaker Naomi Kawase, will be released in spring 2022.

With a successful Tokyo 2020 edition under their belt, the Heritage team are now turning their attention to the Olympic Winter Games Beijing 2022, being held from 4 to 20 February. These Games will mark the first time in history that a city has played host to both Summer (2008) and Winter editions of the Olympic Games. With more than 2,800 athletes and seven new events  womens monobob, mens and womens freestyle skiing big air, and mixed-team events in short track, ski jumping, freestyle skiing aerials and snowboard cross  there are several firsts that the heritage team have their eyes on.

Our focus for the collection in Beijing is on the NOCs who perform well in the winter, but we also target the athletes with great Olympic stories, said Audrey Bongard, Archivist Team Coordinator for the OFCH. Stories of great perseverance, athletes overcoming obstacles to participate in the Games or amazing firsts and records will allow us to tell the stories of the Games through those gifts to the collections. Of course, the new disciplines will be targeted, but we will also put great effort into collecting objects that are typically hard to find, such as full figure skating kits or helmets that are personalised and decorated.

The remit of the OFCH Heritage Unit includes acquiring, preserving, restoring, documenting and ensuring the availability of more than 90,000 artefacts, 650,000 photographs, 45,000 hours of videos and 8,800 hours of sound documents, for internal and external partners.