20 fully prepared reservoirs have been declared as part of Amrit Sarovar Abhiyan today. The water storage capacity of these 20 reservoirs is 1276 TCM. 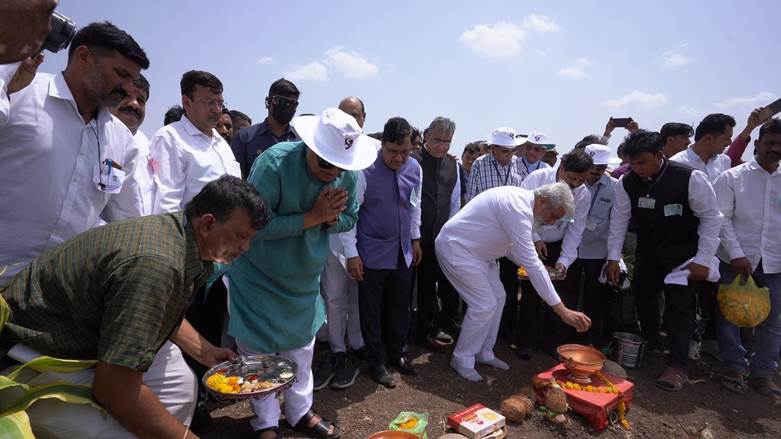 The Amrit Sarovar projects under construction at Wani, Rambhapur and Babulgaon in the premises of Dr. Panjabrao Deshmukh Krishi Vidyapeeth, Akola were visited by Shri Nitin Gadkari today in the presence of Vice Chancellor Shri Vilas Bhale. Speaking on the occasion Shri Gadkari said after the successful use of Buldhana pattern in Maharashtra, more than 500 water bodies, 270 farm ponds have been rejuvenated by 2022 under Amrit Sarovar Abhiyan. As a result of which additional water storage capacity of 34,000 TCM has been created at no cost in the state.


He said in this chain of Amrit Sarovar, 34 reservoirs with water storage capacity of 2468 TCM are being constructed in the campuses of Dr. Panjabrao Deshmukh Agricultural University(PKV), Akola and Maharashtra Animal Husbandry and Fisheries University(MAFSU), Nagpur’s Borgaon in Akola district.


The Minister said in this model based on the successful pilot project Buldhana pattern of water conservation, deepening and rejuvenation of water bodies is being done at no cost through revamping of highways related to Amravati-Akola National Highway 53. Shri Gadkari said the soil, silt and other things extracted from these reservoirs are being used for national highway work. Through this model scheme, 34 ponds/lakes are planned to be constructed in PKV and MAFSU complexes in which 2468 TCM water reservoir is proposed to be created. Out of these, the construction of 20 lakes has been completed and the construction work of 9 lakes is going on while 5 lakes will be started soon, he added.


The Minister said initially, the irrigation potential here was 150 hectares, but after the formation of these reservoirs, it has increased to 663 hectares. After the construction of the proposed 34 reservoirs, this irrigation potential will increase to 2468 hectares. He said earlier only one Kharif crop was taken in the premises, after this project now more than one crop can be taken.


Shri Gadkari said a pond has been constructed in 16 acres in the Animal Husbandry Development Area and 300 TCM of water has been made in it. Earlier there was a big problem of water scarcity in the university campus. Due to the failure of the old schemes, irrigation could be  done in only a few areas. After the completion of these 34 planned lakes, the entire area of ​​the University will come under irrigation, he said.


The Minister said the ponds designed for aquaculture with this model can be used for fishing. It will be possible to get revenue by auctioning them. This will also create employment. Last year, Punjabrao Deshmukh University had auctioned two such lakes and earned Rs 8 lakh. He said this model will benefit 18 villages with a total population of 1 lakh through water recharge.


Shri Gadkari said this model of Amrit Sarovar should be used in all drought affected areas and agricultural universities of the country. A total of 71 agricultural universities across the country can be benefited by this. He called upon all the ministers of state and country to visit these Amrit Sarovar projects of Panjabrao Deshmukh University and try to create such projects in their area.

Union Minister for Road Transport and Highways Shri Nitin Gadkari has emphasized that proven technology, economic viability, availability of raw material and effective marketing  all of these are necessary for successful completion of projects. Inaugurating Mobile Cold Mixer Cum Paver Machine & Patch Fill Machine for pothole repair by CSIR-CRRI  he said  most important thing in road sector is that cost of construction has to be reduced and quality of construction has to be improved. The minister said patent registration of any technology is not the end of the matter. He said till the patent is not commercialized and fully utilized it is the responsibility of the organization to do regular follow-ups and take it to final culmination .

Shri Gadkari said due to various reasons there is hesitancy in the system to adopt proven technology. He said total synchronization in communication, coordination and cooperation is required for implementing new systems and technologies. The Minister  complimented CSIR for their design in construction of cement -concrete road in Nagpur  in 1997 which has not seen any potholes till date. He said all efforts should be made to use alternatives to Steel and Cement in construction of roads.

Union Minister Dr Jitendra Singh said, increasing application of Science and Technology in the Road Transport and Highways sector is adding great value to India’s developmental journey. He said, the use of affordable, sustainable and recyclable technologies in the  sector is fast building the arterial network of India. He reiterated that India’s ascent in coming decades will be determined through Science, Technology and Innovation. NHLML, a SPV of NHAI, presented a plan to develop a future ready Delhi by building efficient logistics systems, creating integrated freight villages at strategic locations with hub and spoke model in & around Delhi and making the Capital greener. NHLML’s plan will not only decongest Delhi but also bring huge new investment in infrastructure sector. In the process it will create sustainable employment opportunities for the youth. Speaking on the occasion Shri Gadkari said under the leadership of Prime Minister Shri Narendra Modi we are committed to build world class infrastructure in Andhra Pradesh. He said improved road connectivity in the coastal area will boost tourism, create employment opportunities for urban and rural youth and play a pivotal role in bringing prosperity to the people of Andhra Pradesh. The Minister said the construction of ROBs under Setu Bharatam will facilitate hassle free movement of traffic, ensure the safety of commuters, save time & fuel and will also reduce pollution. He said the National Highways are the arteries of socio-economic development of the state. 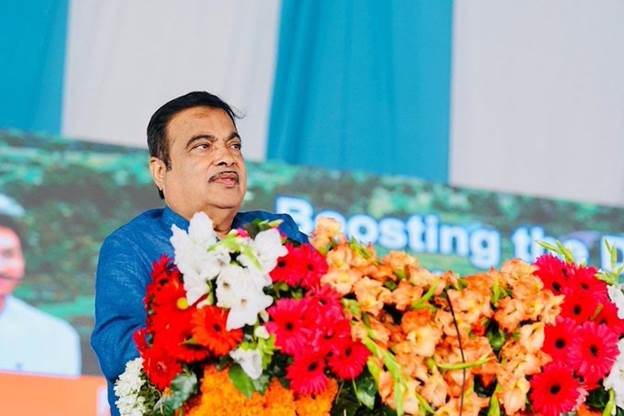 Shri Gadkari said the 4-lane road to Visakhapatnam and Kakinada ports of Andhra Pradesh will play a crucial role in improving logistics. The construction of Benz Circle flyover will help decongest the city of Vijayawada, he added.