“Most of the youngsters coming into wildlife film making lack commitment’’

Detailing the challenges of wildlife filmmaking, he said that the difficult part is to get an interesting story and getting it pitched to international channels. “ It is very difficult to get commissioned projects from international channels. It is one of the reasons why most of my projects are self-funded. Then there are challenges like getting permission to shoot, obtaining clearance from animal welfare board and getting high definition good quality equipment on hire to shoot”, he said. 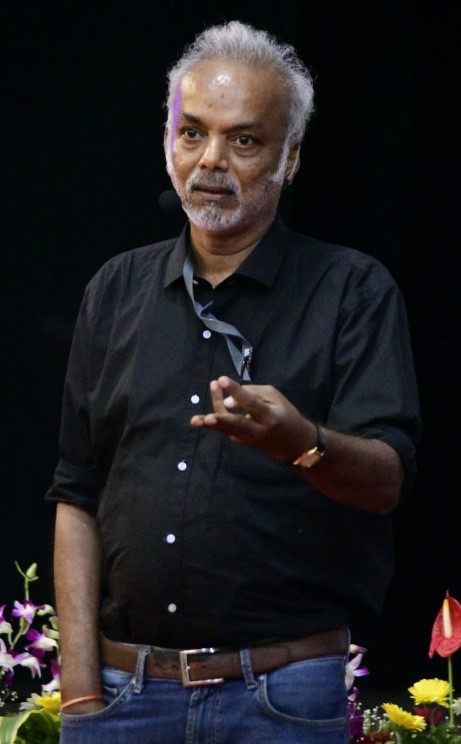 Touching upon the financial aspects of wildlife film making, Subbiah Nallamuthu said that though he managed to get the investment back from most of his films, there is no guarantee for it. He further said that it is a great gamble to do a wildlife documentary.

Recalling the genesis of his award winning documentary ‘The World’s Most Famous Tiger’, he said that 250 hours of footage has been captured using a single camera for the production. “Whole idea of getting a sequence, connecting it and making it into a story is a big challenge. 90 % of the sound track used in the film was added during post production and 10 % of wild life track was recorded during shoot,” he said. Subbiah Nallamuthu criticised young people that most of them having DSLR cameras want to go out into the wild, shoot something in auto mode and make money in six months; which is not possible. If there is no perfect story, then no one will be interested to buy it. A whole lot of commitment and slogging is involved. Unfortunately our youngsters are lacking that kind of commitment”, he described.

Replying to the reason for selecting Royal Bengal Tiger as his subject for documentary, Subbiah said that since Tiger is a charismatic animal, that story will sell and help get back the huge money invested in making. “But I have also done award winning documentaries on other animals which most people don’t know”. He also revealed his plan to make a full length feature film on Tiger. Subbiah’s documentary ‘The World’s Most Famous Tiger’ was also screened during the Master Class.

Mazda sees it as the core responsibility of any automotive manufacturer to do their part in curbing global warming by reducing CO2 emissions in every process of vehicle production, including manufacturing, transport, vehicle usage, recycling, etc. Consequently, Mazda has been actively engaged in carbon neutral initiatives.

To achieve carbon neutrality in Mazda factories around the globe by 2035, we plan to work closely with our partners and proceed via three pillars: (1) energy conservation, (2) shift to renewable energies, (3) introduction of carbon neutral fuels for in-house transportation.

The first pillar focuses on energy conservation efforts during the vehicle manufacturing processes, which emit large amounts of CO2. These include reduction of thermal energy through the development of low-temperature curing paints and improvement of energy conversion efficiency by optimizing processing technology.

Regarding the second pillar, i.e., shifting to renewable energy, Mazda recognizes the importance of not only making steps toward the company’s carbon neutrality, but also that of contributing to the growth of the local economy. Therefore, we will participate proactively in efforts of the Carbon Neutral Electricity Promotion Subcommittee, which aims to expand the supply and demand of carbon neutral electricity throughout the Chugoku region. We are also considering various forms of decarbonization, such as low/carbon-free power generation in our plants and procurement of electricity from renewable energy suppliers.

For introduction of carbon neutral fuels, the third pillar of our initiatives, efforts include Mazda working toward using carbon neutral fuel for in-house transportation in cooperation with the Hiroshima Council for Automotive Industry-Academia-Government Collaboration which is promoting the practical use of next-generation biofuels.

Furthermore, we will capitalize on these initiatives conducted in Japan and use them as a basis to implement the optimal approach for each facility outside Japan.

Through these efforts, Mazda will continue to make steady steps toward the greater challenge of making our whole supply chain carbon neutral by 2050 and our endeavor to help create a future where we can coexist with our beautiful planet in harmony and forever.

We are excited to announce that our Extraordinary People Awards team selected Robin Shockley as the Woman of the Year for 2021. The prestigious award will be a televised event reaching millions through the airwaves in Atlanta, Georgia.

Robin Shockley is the Founder of “Focus Forward with Robin”, which includes being a Columnist Writer for several magazines worldwide as well as she is a published Author of “Catching the Vision to Focus Forward” book and Author of over 60 inspiring faith based devotionals.  She is the PR Agent for RSGN Network and World Women Conference & Awards in Atlanta where she hosts her very own television show “Focus Forward with Robin“, allowing guests to share their stories from pit 2 purpose.  Also she is an active PR agent for GnG Productions in Hollywood which she provides promotional media and social media support through brand recognition. She is an Ambassador and Director for the Sports Karate Museum and Come On In Inc organizations, where she serves as an award presenter and humanitarian advocate along with being a domestic violence advocate too. As a Motivational Speaker since 2009 and new actress with film,  Robin’s purpose in life is being the link between the person who needs help and the person who can help. She motivates people to recognize their potential, purpose & passion for moving forward in life while living their best legacy today through serving others utilizing skills. She is the bridge maker that inspires individuals and small businesses to gain confidence to recognize the importance of stepping forward to make a difference now for future generations.

Honorees will be able to accept their prestigious award during the televised event and be seen by millions of viewers both globally and locally. In addition, this will be a memorable event as Dr. John Williams, the Host of Elite TV will be engaging with Red Carpet interviews on his show. This is an opportunity of a lifetime!

The registration for the fall awards will start on May 5th with limited seating.

There will be opportunities to visit other sponsorship on the registration page: ExtraPeopleAwards

Mission: A World where people will accept others diverse talents and help end poverty.

An Altcoin From 2013 Is Making a Huge Comeback

NY, USA, 16th April, 2021, ZEXPRWIRE, First there was Bitcoin.  Then other crypto currencies joined the foray.  One of the earliest was DigitalCoin ($DGC), which was designed to improve upon the limitations of Bitcoin and Litecoin.  At one point DigitalCoin ranked among the top 10 cryptos, but as time went on it fell into obscurity.  However, although hundreds of “altcoins” have become defunct due to disinterest, poor design, or loss of wallets, DigitalCoin—also known as DigiCoin—has kept chugging along, and for good reason.

DigitalCoin maintains a key strength of Bitcoin: namely, scarcity.  Whereas many other coins have grown in popularity, they have hit the ceiling of over-circulation, but Bitcoin has skyrocketed because of scarcity.  There are less than 20 million Bitcoins circulating.  There are 37 million DigitalCoins circulating.  But there are 129 billion Dogecoins, 115 million Ethereum, and 67 million Litecoins.

Another key strength of $DGC is that transactions are secure, but much faster: 15X faster than Bitcoin and 4X faster than Litecoin.  Blocks can be hashed using Scrypt, X11, or SHA-256 algorithms.  The scarcity and superior design of $DGC has suddenly caught the attention of investors looking for the bargain investment.  And with only 37 million in circulation, and trading for three to four cents, $DGC seems to be just the ticket.  In just the past couple of months $DGC has skyrocketed 2,000 percent, but scarcity could bring it to $10, or even higher, especially following the April 14th IPO of Coinbase and the surge of money into the burgeoning crypto market.