Aadhaar registration, usage and adoption is progressing well across India, and by the end of July 2022, more than 134.11 crore Aadhaar numbers have been generated so far for the residents.

As of end July 2022, a cumulative number of 7855.24 crore Aadhaar authentications have been carried out so far, as against 7702.74 crore such authentications by the end of June.

During July, more than 53 lakh Aadhaars were generated, of these, a majority were of children below the age of 18 years (0-18 age group). Aadhaar saturation level among adult residents is now near universal, and the overall saturation level is 93.41%. At least 26 states and UTs have now a saturation of over 90%.

Aadhaar, a digital infrastructure of good governance, is a catalyst of both ease of living and ease of doing business. The digital ID is helping various ministries and departments in the centre and at states in improving efficiency, transparency and delivery of welfare services to the targeted beneficiaries. Around 900 social welfare schemes in the country run by both centre and states have been notified to use Aadhaar till date.

Aadhaar Payment Bridge (APB) has been playing a key role in delivering benefits via welfare schemes including direct benefit transfer for LPG, MGNREGA, and national social assistance program or NASP. All the APB transactions during the month of July involved an amount of Rs. 12511 crore.

More than 1507 crores of last mile banking transactions have been made possible through the use of Aadhaar Enabled Payment System (AEPS) and the network of micro ATMs. It has enabled financial inclusion at the bottom of the pyramid. In July alone, 22.37 crore number of AEPS transactions were carried out across India.

Note: UIDAI is starting a monthly bulletin underlining achievements and progress of Aadhaar. Media is requested to note that some of the data points may undergo minor updates subsequently.

Tokyo Olympian Anshu Malik is looking forward to the Senior Asian Championships in Mongolia, starting April 19, as a much-needed exposure competition ahead of Commonwealth Games and Asian Games. A total of 20 wrestlers from the men’s team across the Freestyle and Greco-Roman categories and ten from the women’s team will compete at the event.

The tour has been sanctioned at cost to the Government to the of an overall of Rs 1.28 Crore for both teams. The competition in Mongolia is seen as a good exposure competition ahead of the Commonwealth Games and the Asian Games, scheduled later this year. Tokyo 2020 medalists Ravi Dahiya and Bajrang Punia, among others, will also be competing in Mongolia.

“I have been a part of various international camps and I’m happy to get all these world-class facilities at the SAI national centre of excellence on Lucknow,” said Anshu. “I thank the Wrestling Federation of India too for setting up the camp here ahead of the Sr. Asian Championship and the CWG and Asian Games this year.

“Me and my teammates are looking forward to the best of performance from the upcoming tournaments,” added Anshu.


In 2020-21 (Dec-Nov), 302.30 crore litres of ethanol was supplied to OMCs thereby achieving 8.1% blending levels, which is historically the highest

The Union Minister of State for Consumer Affairs, Food and Public Distribution, Ms. Sadhvi Niranjan Jyoti in a written reply to a question in Rajya Sabha today informed about the State-wise list of supplied quantities of ethanol which were produced by distilleries in the country and supplied to Oil Marketing Companies (OMCs) for blending with petrol along with the blending percentage achieved under Ethanol Blended with Petrol (EBP) Programme during  last three Ethanol Supply Years (ESY) (Dec-Nov) 2018-19, 2019-20, 2020-21 and current ESY 2021-22.

The Central Government has taken various measures in past 3 years to increase the production of ethanol to meet the blending target which are enumerated as under:


Note:     Against some states mentioned above, the quantity of ethanol supplied/blended has been indicated as Nil whereas blending percentage has been indicated . This is due to the fact that in such states, instead of supplying ethanol for blending, directly blended fuel was supplied.

February, being a 28-day month, normally witnesses revenues lower than that in January. This high growth during February 2022 should also be seen in the context of partial lockdowns, weekend and night curfews and various restrictions that were put in place by various States due to the omicron wave, which peaked around 20th January.

The chart below shows trends in monthly gross GST revenues during the current year. The table shows the state-wise figures of GST collected in each State during the month of February 2022 as compared to February 2021. 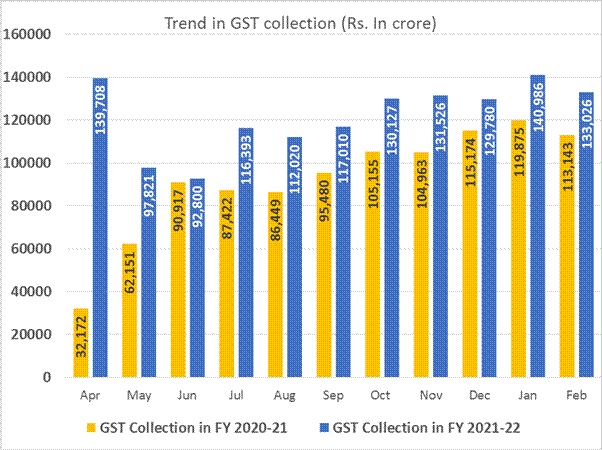 
[1] Does not include GST on import of goods