Practicing Family Law for over a decade has been successful for Attorney Grant Gisondo. With his law office located in Palm Beach Gardens, Florida, Attorney Gisondo can represent clients in Palm Beach, Martin, St. Lucie, Miami-Dade, Broward, Orange, and Hillsborough Counties, New York and Washington DC. He has recently achieved the honor of becoming a Board-Certified lawyer in Marital and Family Law, which adds another level of expertise to his already successful practice. Only 1% of Marital and Family Law lawyers in Florida have attained this award.

Attorney Gisondo is proud to be able to represent clients with Family Law issues that cover many areas of need. He can help with divorce (dissolution of marriage), alimony, child support, pre and post-nuptial agreements, post-judgment modification of alimony and or child support, arrears in alimony or child support, adoption, mediation, parental timesharing, and development of a parenting plan, and equitable distribution of marital assets and liabilities. It is important to note that in Florida, the distribution of marital assets and liabilities is done equitably, not equally, so an attorney’s help in this area is vital.

Attorney Gisondo wants prospective clients to know he is dedicated to helping them get outstanding representation. His mission statement is, “We are a guiding light through even the darkest of situations which result in solutions. I provide clients going through tough times with a light at the end of the tunnel. I counsel clients about good decision making in both their emotional and financial futures.” His guiding principles are:

• Earning by actions trust, loyalty, and respect.
• Always be accessible and responsible to clients.
• Honesty, integrity, and justice through experience.
• I will always keep an open ear and open mind and will fight your fight as if it was my own.

Attorney Gisondo offers a free, initial, in-office consultation where you can ask questions, get to know attorney Gisondo, learn his fee arrangements, and how he can help. His website is https://gisondolaw.com, where you can learn more about him and his practice. His office hours are Monday through Friday from 9:00 AM to 5:00 PM and on Saturday for new clients from 8:30 AM to 1:00 PM. Please call his office at (561) 530-4568 to make an appointment.

Orr & Reno attorney Lindsay Nadeau has been named the 2022 recipient of the Philip S. Hollman Award for Gender Equality. Lindsay, who joined Orr & Reno in 2016, is a member of the firm’s litigation and governmental relations departments.

The Philip S. Hollman Award for Gender Equality will be given at the New Hampshire Bar Association’s (NHBA’s) Midyear Meeting on February 18, 2022. The Hollman Award, established in 2003, honors retired NH Superior Court Judge Philip S. Hollman’s efforts as a stalwart advocate for gender equality in the legal system.

In its decisions, the justices ruled to uphold the stay (hold) on the OSHA mandate, affecting businesses with more than 100 employees, but rejected the stay in the Centers for Medicare Services (CMS) case involving healthcare workers. The ruling means that employers will be prevented from having to force employees to be vaccinated, while healthcare workers will face a new deadline to comply with the mandate.

Attorney General Reyes issued the following statement upon learning of the Court’s findings:

“The Supreme Court’s rejection of the OSHA mandate is a true victory for all Americans who believe in the rule of law,” said Attorney General Reyes. “There is no workaround when it comes to the Constitution—the federal government cannot dictate its policies where it lacks statutory authority. These liberties are not negotiable.”

Reyes continued: “We are extremely disappointed, however, in the Court’s decision involving healthcare workers. As the four dissenting justices correctly note, a ‘hodgepodge’ of statutes does not authorize the Secretary to force healthcare workers to undergo a medical procedure. And we share the dissenting justices’ concern that this decision will have a lasting negative impact on future agency decision-making.”

“I want to thank all of our sister states who joined us in this fight. Due to the hard work of AG Offices around the country, business owners and millions of their employees are, for now, protected from unprecedented executive overreach. We sympathize with medical workers who deserve to also be protected but will not be after today.” 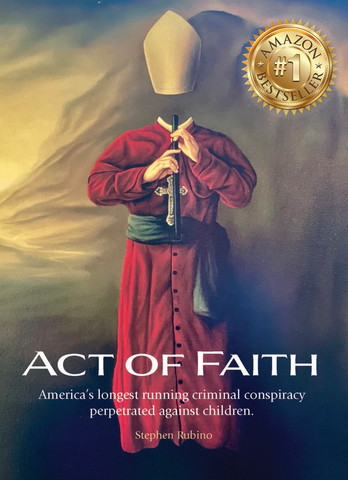 Act of Faith, a new book by Stephen Rubino, has been released by Dorrance Publishing Co., Inc.

In his debut novel, trial attorney Stephen Rubino takes the reader on an electrifying journey of deceit, intrigue, tragedy, passion and ultimate redemption. At the intersection of the sacred and the profane, Act of Faith dissects the Vatican’s complicity in America’s longest criminal conspiracy perpetrated against children. This multi-generational family saga is richly portrayed through an ensemble cast of unforgettable characters, revealing the secret world of the Vatican’s sheltering of sexual predators to avoid bringing scandal to the faithful. Act of Faith offers an unflinching account of the still emerging sexual abuse scandal plaguing the Catholic Church and its impact on the survivors and their families across America. The story chronicles the lives of siblings Francis and Elizabeth Natale, who suffer unspeakable psychological damage after being sexually abused by their trusted parish priest. As adults, Francis and Elizabeth become estranged, each hiding their secrets in dangerous double lives. He as a gifted pianist and sexually conflicted Catholic priest, she as a reckless but highly successful trial attorney. After resigning her partnership in a major New York City law firm, Elizabeth sets out to uncover the roots of the abuse scandal and to exact her personal revenge. On a serendipitous road trip across the country, Elizabeth confronts her lifelong demons and forms an unlikely alliance with Father Thomas Atkinson, her long lost high school love who has become a Vatican whistleblower. After a tense reunion with Francis, the trio enters the super-charged environment of high stakes litigation, exposing the Church’s centuries old practice of hiding sexual predators in plain sight from the religious faithful and law enforcement. Together, the trio brings to the courthouse steps the first Federal Civil Racketeering lawsuit against the Catholic Church. Visit the book’s website at http://www.actoffaithbook.com/.

About the Author
Stephen Rubino is a practicing attorney who filed the first Civil Racketeering case against the Catholic Church in 1993. For the last thirty-five years he has represented hundreds of abuse survivors throughout North America and the Canadian Arctic. For seventeen years, Mr. Rubino served as chairman of the Childhood Sexual Abuse Litigation Group of the American Association for Justice. In 2008, Mr. Rubino was a finalist for the Public Justice Foundation’s Trial Lawyer of the Year Award for his work in the Los Angeles Archdiocese and San Diego Diocese Catholic Abuse Litigation. In 2014, he received the Pioneer Award from the Survivor’s Network of Those Abused by Priests (SNAP). His work has been widely profiled in print and broadcast media and he has lectured extensively on the intricacies of the cover-up and how America’s Bishops have used draconian statutes of limitations to suppress what would otherwise be viable claims against the Catholic Church.

Act of Faith is a 606-page hardcover with a retail price of $40.00 (eBook $35.00). The ISBN is 978-1-6393-7138-9. It was published by Dorrance Publishing Co., Inc of Pittsburgh, Pennsylvania. For members of the press, to request a review copy, visit our virtual pressroom at http://dorrancepressroom.com or to buy the book visit our online bookstore at https://bookstore.dorrancepublishing.com/act-of-faith-americas-longest-running-criminal-conspiracy-perpetrated-against-children-2021-hardback-606-pages/

The award was created in the name of Green Bay great and NFL Hall of Fame lineman Jerry Kramer who won multiple championships with the team. The trophy was presented to Reyes by Packers President Mark Murphy and former NFL player and National Director of the Child ID program, Kenny Hansmire, who stated:

“The Utah AG is the hardest working public official I know and embodies the principle of servant leadership. Sean Reyes is a fierce and unrelenting advocate for children and one of the most effective leaders when it comes to protecting America’s youth. He recruited leaders from the private and public sector, convinced them to put aside political differences and united them in this effort.

“The AG has received numerous awards and even a White House Commendation for his work rescuing kids from human trafficking, opioids, suicide, bullying and many other threats. But, this award focuses on his work to protect missing and abducted children.”

Said Reyes: “Jerry Kramer is one of my heroes. To receive this award in his name is one of the great honors of my life. Jerry has been a champion on and off the field. We are hoping to recruit many more champions like him to help us protect America’s kids with tools like the Child ID Kit.”

The Child ID program is over two decades old, but recently underwent a re-launch after several years of transition. Reyes leads the resurgence nationwide, bringing law enforcement, corporations, educators and policy makers together in a bi-partisan effort. Many attorneys general have responsibility for finding missing and abducted children in their respective states.

“Our Child Abduction Response Team (CART) in Utah has one of the most difficult jobs imaginable. Tools like Child ID, give us the best chance to safely recover and reunite children with their families,” commented Reyes.

According to Reyes: “Parents gather the fingerprints, hair samples and other info and keep the kits safely in their homes. They never have to show them to anyone, unless, heaven forbid, their child goes missing. Then, if they choose to share it, every bit of data in the kit can be crucial for us in law enforcement to find their child.”

In Utah, the Child ID program is led by the Attorney General’s Office and sponsored by Vivint Smart Home, Rocky Mountain Power and Johnson & Johnson. It is administered with the help of local Sheriffs, Police Chiefs and schools.

The Child ID program has long been supported by collegiate and NFL coaches, players, owners and organizations including the American Football Coaches Association.