The books reviewed are the “Publisher’s Dilemma: A Big City Tale of Power, Privilege & Murder” and “Black Camelot’s Dawn & The Return of Madame Hot Temper.”

The Black Camelot series developed by African-American fiction novelist Darius Myers is set in the fast-paced world of New York high society. The saga follows two African-Americans who end up in control at the world’s largest, family-owned media company.

As they take control, the two men become the darlings of the city after gossip celebrity reporters name them and their equally successful friends Gotham’s Black Camelots. It’s a regal status that doesn’t go over well. Legendary white racist groups embark on Gotham to end to the era of Black Camelot.

The suspense filled series began with gunshots and murder at the world’s largest media company. It’s the most dramatic crime and news event of the decade. The investigation introduces readers to the scandal and dark secrets of the legendary media family and the rivalries that cause it to implode.

The author has created a compelling collection of character groups and pits them in a 21st century world filled with greed, envy, hidden agendas, secret societies, assassins, warriors, romance and drama that keeps readers turning pages. The Black Camelots are entered into this world and are granted power and a mission. As they assume power, so does the suspense-filled action, adventures and thrills for the series fans.

“Readers fell hard for the characters in the first story and insisted I bring them back. They want to see more from the black male leading characters, Donald Alexander and Kwame Mills. They are also drawn to the jilted Madame Hot Temper as a strong female lead and the other compelling female character. Lastly, the Celebrity Hack patrol roles have taken on a life of their own. They are pivotal characters in the series,” Myers said.

Critique TPD: “The Publisher’s Dilemma: A Big City Tale of Privilege, Power & Murder” lives up to its title as a sensational crime thriller. The mystery begins with a murderous attack on the executives of a prestigious media company, immediately after the company had taken steps toward more racial diversity. Unraveling the tangled threads of motives, sordid secrets, greed and corruption is a deadly undertaking, in this edge-of-seat saga of violence and conspiracy. The Publisher’s Dilemma is enthusiastically recommended for connoisseurs of the genre! It should be noted for personal reading lists that The Publisher’s Dilemma is also available in a Kindle edition ($4.99).

Critique “Black Camelot’s Dawn”: The sequel to The Publisher’s Dilemma, Black Camelot’s Dawn is a high-octane mystery-thriller, set in a city infested with centuries old white supremacist groups. The survivors of The Publisher’s Dilemma have become so wealthy from the sale of their media company that they are dubbed Black Camelots, and marked for death by fanatics who abhor the metaphorical concept of black royalty. Dawn Davis Stuart, nicknamed “Madame Hot Temper” over the killing of her husband (a situation that was more complex than the scandal reported by tabloids), returns to the city just as news of upcoming marriages and threats of murder surface. Packed with excitement and twisted plots, Black Camelot’s Dawn keeps the reader captivated to the last page and is highly recommended. It should be noted for personal reading lists that Black Camelot’s Dawn is also available in a Kindle edition ($4.99). 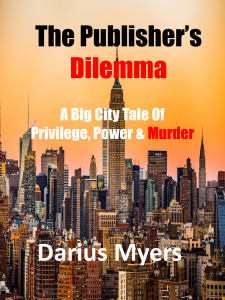