Union Minister of Textiles, Commerce & Industry, Consumer Affairs and Food & Public Distribution, Shri Piyush Goyal said that Textile Industry has a big role to play in making Free Trade Agreements a success. Delivering the Keynote address at the 10th Asian Textiles Conference TEXCON  on the theme- ‘Reimagining the Textile and Apparel Industry for the next Decade’, he said that FTAs with Developed Countries is high on the agenda of Modi Government.

Shri Goyal said that  innovation is going to be the defining feature in India’s march towards becoming a Developed Nation. He highlighted the role of innovation across all value chains in the Textile sector and also urged the Textile sector to focus on recycling and digitization. He said if the industry focuses on innovation, sustainability, digitisation, newer products and utilisation of Free Trade Agreements (FTAs), it can grow fast and compete with the best in the world. 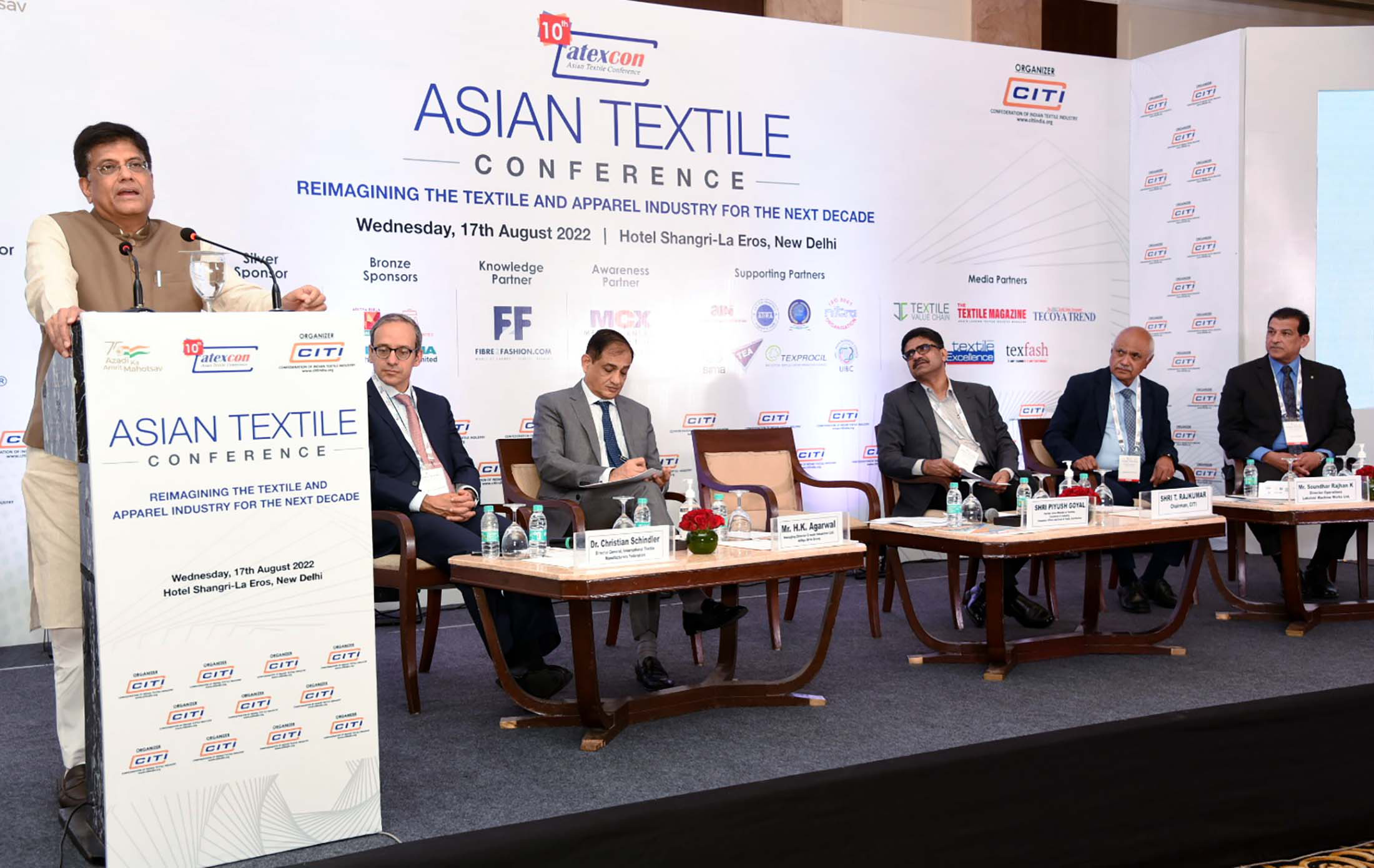 Speaking on sustainability, Shri Goyal said that textiles sector can reduce the pressure on the environment by using reusable resources as well as reduce its own production costs.

Shri Piyush Goyal said that digitisation is another area which can help optimise the entire value chain in the sector. He expressed satisfaction at the fact that the industry captains are talking about digitisation. In current era of information technology, every industry is benefitting from new technologies like blockchain and more. He suggested that the industry should think about high quality products and elementary products like zip and embellishments, which the Indian textile industry imports at present.

The Minister  said that the industry is now benefitting greatly from the vision of Prime Minister Narendra Modi. Shri Goyal said that as we complete 75 years of independence, we can take pride in achievements of Textiles sector over 75 years.

Referring to PM’s independence speech where he referred to  Panch Pran of  Goal of Developed India; Remove Colonial Mindset,   Take Pride in Roots;  Unity and Sense of Duty, the Minister said, “Every citizen has a role to play with collective energy and collective  commitment and  the  resolve of 1.3 billion people will help us achieve the five commiments articulated by the Prime Minister.

Complementing Confederation of Indian Textile Industry, CITI, for bringing together all stakeholders of the Textiles value chain on one platform , the Minister said that the theme, ‘Reimagining the Textile and Apparel Industry for the Next Decade’ is very appropriate, specially with Indian textile exports aiming to reach the target of $100 billion by 2030. He appreciated the forward looking approach of the 10th edition of the Asian Textile Conference.

CITI and Egyptian Cotton also signed a Memorandum of Understanding (MOU) in the presence of the Minister, Shri Piyush Goyal. Both the industry bodies will work together for mutual benefits. Minister of State for Textiles, Smt. Darshana Vikram Jardosh in her address, urged the captains of the Indian textile and apparel industry to prepare themselves  to face the challenges of structural shift in the global textile market.

In his address, Secretary, Ministry of Textiles, Shri Upendra Prasad Singh, said that every industry and sector in India must play a role in achieving the target of becoming a developed nation in the next 25 years as per the vision of the Prime Minister. He said that the Indian textile industry has the strength to expand in the global market as it has a complete value chain. The government is working proactively to address the current problems of the industry, he added.

T. Rajkumar, chairman of the Confederation of Indian Textile Industry (CITI) in his welcome address said that the global textile industry is witnessing a reshuffle of the entire supply chain including the countries from which apparel is sourced. Terms like ‘China Plus One’, re-shoring, onshoring, etc are being commonly heard in interactions across the textile value chain. He said that the value of global textile and apparel exports stood at $828 billion in 2021, registering a growth of 8 per cent over $770 billion in the previous year.

The share of textile, apparel and handicrafts in India’s total exports was 10.62 per cent in 2021-22. In addition to being the largest producer of cotton and jute, India is the second largest producer of silk. The technical textiles segment too has an estimated 9-11 per cent share in the global market.