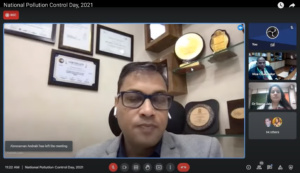 Speaking during the virtual program on the National Pollution Control Day organized by Jamia Hamdard University the Founder Indian Pollution Control Association Mr. Ashish Jain highlighted the current plastic issue which is now a global subject from last 5-6 years after the UN assembly pointed on the Plastic issue, Also the Prime minister of India is committed and working on the plastic Free India campaign including the PW Rule  2016 of EPR which is a great initiative of Government environment program running.

Jain also mentioned the poor enforcement of rules and policy is a serious concern that need to take care by the Government of India, to counter this he said some of the states already banned the plastic but few states still manufacturing It, which is the lack of policy implementations of Government of India, Government should take a strong decision on enforcementship program of Plastic waste management

Dr. Radha Goyal, Deputy Director of Indian Pollution Control Association said “Air pollution problem is not only in Delhi. It is the problem of entire India, where more than 122 cities are facing the poor air quality issue due to high PM10 and PM2.5 concentrations. As a short-term measure, NCAP, India’s flagship program has been launched in 2019  to reduce the PM2.5 levels by 20-25% by 2024. However, this is not sufficient. We will still not be able to achieve the safe limits of air quality as per Indian Standards. To manage the problem of air pollution holistically,  India needs to follow air shed management approach, where coordinated action are required at interdepartmental, inter cities and interstates levels with timely enforcement of air quality control measures to achieve the desired results. Further, there is a need for performance-based grant allocation to different states with provisions and policies for incentivization of committed interventions and control measures to meet the compliance. Citizen lead Air Quality management approach is the need of an hour to inculcate the best practices and responsible behavior among citizens to tackle the local level air quality issues”

IPCA is working in the field of Plastic and Air for the last 20 Year collected 1.50 Lakh Metric tonne of multi-layered plastic from the environment, which was earlier used as a fuel for second-generation plant in Delhi NCR, IPCA also develop its own Recycle plant in Greater Noida and recycling plastic waste to useful products, apart from the Waste segregation IPCA also Installing Air Purifier in various Area.

IPCA is also running a unique campaign ’10 KG Plastic’ to support the plastic waste at the source, which collects the waste from the doorstep of the residency so anyone can join this campaign to save the environment as it is a fundamental right and everyone responsibility.